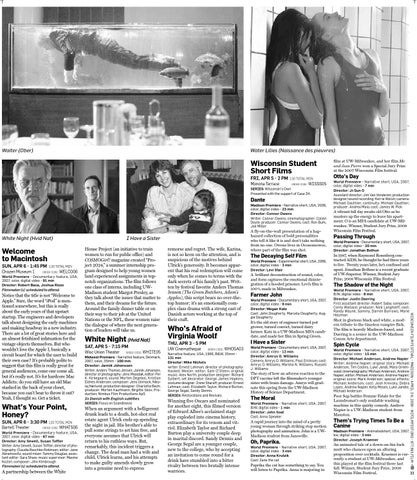 SERIES: Wisconsin’s Own Presented with the support of Case IH.

A partnership between the White

When an argument with a belligerent drunk leads to a death, hot-shot real estate agent Ulrick ends up spending the night in jail. His brother’s able to pull some strings to set him free, and everyone assumes that Ulrick will return to his ruthless ways. But, remarkably, this incident triggers a change. The dead man had a wife and child, Ulrick learns, and his attempts to make guilty amends slowly grow into a genuine need to express

remorse and regret. The wife, Karina, is not so keen on the attention, and is suspicious of the motives behind Ulrick’s generosity. It becomes apparent that his real redemption will come only when he comes to terms with the dark secrets of his family’s past. Written by festival favorite Anders Thomas Jensen (The Green Butchers, Adam’s Apples), this script bears no over-thetop humor; it’s an emotionally complex class drama with a strong cast of Danish actors working at the top of their craft.

A brilliant deconstruction of sound, color, and form captures the emotional disintegration of a hooded prisoner. Levi’s film is 100% made in Milwaukee.

The Decaying Self Film

Winning five Oscars and nominated for another eight, this filmed version of Edward Albee’s acclaimed stage play exploded into cinema history, extraordinary for its venom and vitriol. Elizabeth Taylor and Richard Burton play a university couple deep in marital discord. Sandy Dennis and George Segal are a younger couple, new to the college, who by accepting an invitation to come round for a drink have stumbled into a bitter rivalry between two brutally intense warriors.

The story of how an adverse reaction to the DPT vaccine left the filmmaker’s younger sister with brain damage. Amrys will graduate this spring from the UW-Madison History of Science Department.

A rapid journey into the mind of a pretty young woman through striking stop motion photography and animation. John is a UWMadison student from Janesville.

Paprika the cat has something to say. You will listen to Paprika. Anna is majoring in

A vibrant fall day awaits old Otto as he musters up the energy to leave his apartment. O is an MFA candidate at UW-Milwaukee. Winner, Student Jury Prize, 2008 Wisconsin Film Festival.

Shot in glorious black and white, a modern tribute to the timeless vampire flick. The film is heavily Madison-based, and Daering is a senior in the UW-Madison Comm Arts department.

Poor Sap battles Femme Fatale for the Laundromat’s only available washing machine in this quirky comedy. Andrew Napier is a UW-Madison student from Mauston.

Notice that the title is not “Welcome to Apple.” Sure, the word “iPod” is mentioned somewhere, but this is really about the early years of that upstart startup. The engineers and developers talk about designing the early machines and making headway in a new industry. There are a lot of great stories here and an almost fetishized infatuation for the vintage objects themselves. But who wouldn’t love the Apple I, basically a circuit board for which the user to build their own case? It’s probably polite to suggest that this film is really great for general audiences, come one come all, but it’s really not. It’s for hardcore Mac Addicts: do you still have an old Mac stashed in the back of your closet, because you can’t bear to throw it out? Yeah, I thought so. Get a ticket.

House Project (an initiative to train women to run for public office) and COSMOGirl! magazine created “Project 2024,” a summer internship program designed to help young women land experienced assignments in topnotch organizations. The film follows one class of interns, including UWMadison student Margot Presley, as they talk about the issues that matter to them, and their dreams for the future. Around the family dinner table or on their way to their job at the United Nations or the NFL, these women raise the dialogue of where the next generation of leaders will take us.

A fly-on-the-wall presentation of a haphazard collection of bold personalities who tell it like it is and don’t take nothing from no one. Owens lives in Oconomowoc, where part of the film was shot.

film at UW-Milwaukee, and her film Me and Jean Pierre won a Special Jury Prize at the 2007 Wisconsin Film festival.

An animated tale of a down-on-his-luck mutt who chances upon an alluring proposition over cocktails. Kraemer is currently a student at UW-Milwaukee, and this played at the film festival there last fall. Winner, Student Jury Prize, 2008 Wisconsin Film Festival. 33