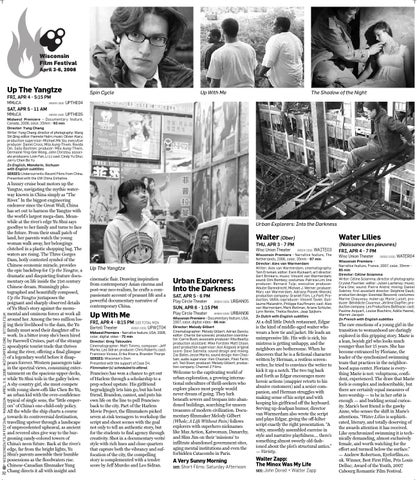 The Shadow of the Night

A luxury cruise boat motors up the Yangtze, navigating the mythic waterway known in China simply as “The River.” In the biggest engineering endeavor since the Great Wall, China has set out to harness the Yangtze with the world’s largest mega-dam. Meanwhile at the river’s edge Yu Shui says goodbye to her family and turns to face the future. From their small patch of land, her parents watch the young woman walk away, her belongings clutched in a plastic shopping bag. The waters are rising. The Three Gorges Dam, hotly contested symbol of the Chinese economic miracle, provides the epic backdrop for Up the Yangtze, a dramatic and disquieting feature documentary on life inside the 21st century Chinese dream. Stunningly photographed and beautifully composed, Up the Yangtze juxtaposes the poignant and sharply observed details of Yu Shui’s story against the monumental and ominous forces at work all around her. Among the two million losing their livelihood to the dam, the Yu family must send their daughter off to work. In a bitter irony she’s been hired by Farewell Cruises, part of the strange apocalyptic tourist trade that thrives along the river, offering a final glimpse of a legendary world before it disappears forever. Western passengers take in the spectral views, consuming entertainment on the spacious upper decks, while Yu Shui toils in the galley below. A shy country girl, she must compete with young show-offs like Chen Bo Yu, an urban kid with the over-confidence typical of single sons, the “little emperors” of China’s one-child-only policy. All the while the ship charts a course towards its controversial destination, travelling upriver through a landscape of unprecedented upheaval, as ancient and revered sites give way to the burgeoning candy-colored towers of China’s neon future. Back at the river’s edge, far from the bright lights, Yu Shui’s parents assemble their humble possessions as the floodwaters rise. Chinese-Canadian filmmaker Yung Chang directs it all with insight and 32

Urban Explorers: Into the Darkness

Up The Yangtze cinematic flair. Drawing inspiration from contemporary Asian cinema and post-war neo-realism, he crafts a compassionate account of peasant life and a powerful documentary narrative of contemporary China.

Urban Explorers: Into the Darkness

Francisco has won a chance to get out of Harlem through a scholarship to a prep school upstate. His girlfriend begrudgingly lets him go, but his best friend, Brandon, cannot, and puts his own life on the line to pull Francisco back to the city. Part of the Harlem Movie Project, the filmmakers picked seven at-risk teenagers to workshop the script and shoot scenes with the goal not only to tell an authentic story, but for the students to find agency through creativity. Shot in a documentary verité style with rich hues and close quarters that capture both the vibrancy and suffocation of the city, the compelling story is complemented with a tender score by Jeff Murcko and Leo Sidran.

Welcome to the captivating world of urban exploration, a growing international subculture of thrill-seekers who explore places most people would never dream of going. They lurk beneath sewers and trespass into abandoned buildings, searching for unseen treasures of modern civilization. Documentary filmmaker Melody Gilbert (Whole; A Life Without Pain) follows explorers with superhero nicknames like Max Action, Katwoman, Danarchy, and Slim Jim on their ‘missions’ to infiltrate abandoned government sites, aging mental institutions and even the forbidden Catacombs in Paris.

At a dull little Dutch restaurant, Edgar is the kind of middle-aged waiter who wears a bow tie and jacket. He leads an unimpressive life. His wife is sick, his mistress is getting unhappy, and the neighbors are bothersome. When he discovers that he is a fictional character written by Herman, a restless screenwriter, he tried to convince the writer to kick it up a notch. The two tug back and forth as Edgar encourages more heroic actions (snappier retorts to his abusive customers) and a sexier companion, and Herman struggles with making sense of his script and with keeping his girlfriend off the keyboard. Serving up deadpan humor, director van Warmerdam also wrote the script and plays Edgar, giving the off-kilter script exactly the right presentation. “A witty, smoothly assembled exercise in style and narrative playfulness.... there’s something almost sweetly old-fashioned about the plot’s structural antics.” — Variety.

The raw emotions of a young girl in the transition to womanhood are daringly explored in this gripping story. Marie is a lean, boyish girl who looks much younger than her 15 years. She has become entranced by Floriane, the leader of the synchonized swimming team that practices in the neighborhood aqua center. Floriane is everything Marie is not: voluptuous, confident, experienced. The draw that Marie feels is complex and indescribable, but there are certainly equal measures of hero worship — to be in her orbit is enough — and budding sexual curiosity. Marie’s best friend is the gawky Anne, who senses the shift in Marie’s attentions. “Water Lilies is sophisticated, literary, and totally deserving of the awards attention it has received. Like synchronized swimming it is technically demanding, almost exclusively female, and worth watching for the effort and turmoil below the surface.” — Andrew Robertson, Eyeforfilm.co. uk. Winner, Best First Film, Prix Louis Delluc; Award of the Youth, 2007 Cabourg Romantic Film Festival.