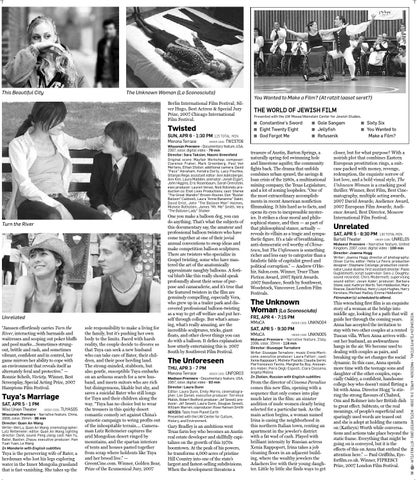 “Janssen effortlessly carries Turn the River, interacting with barmaids and waitresses and scoping out poker bluffs and pool marks....Sometimes strungout, brittle and rash, and sometimes vibrant, confident and in control, her game mirrors her ability to cope with an environment that reveals itself as alternately feral and protective.” — Ronnie Scheib, Variety. Winner, Best Screenplay, Special Acting Prize, 2007 Hamptons Film Festival.

Tuya is the persevering wife of Bater, a herdsman who lost his legs exploring water in the Inner Mongolia grassland that is fast vanishing. She takes up the

sole responsibility to make a living for the family, but it’s pushing her own body to the limits. Faced with harsh reality, the couple decide to divorce so that Tuya can seek a new husband who can take care of Bater, their children, and their poor herding land. The strong-minded, stubborn, but also gentle, susceptible Tuya embarks on an arduous search for a new husband, and meets suitors who are rich but disingenuous, likable but shy, and saves a suicidal Bater who still longs for Tuya and their children along the way. “Tuya has no choice but to wear the trousers in this quirky desert romantic comedy set against China’s quixotic campaign to wring profits out of the inhospitable terrain.... Cameraman Lutz Reitemeier captures the arid Mongolian desert ringed by mountains, and the spartan interiors of tents and houses pasted together from scrap where holdouts like Tuya and her brood live.” — GreenCine.com. Winner, Golden Bear, Prize of the Ecumenical Jury, 2007

One you make a balloon dog, you can do anything. That’s what the subjects of this documentary say, the amateur and professional balloon twisters who have come together at one of their jovial annual conventions to swap ideas and make competition balloon sculptures. There are twisters who specialize in Gospel twisting, some who have mastered the art of the anatomically approximate naughty balloons. A festival blurb like this really should speak profoundly about their sense of purpose and camaraderie, and it’s true that the featured twisters in the film are genuinely compelling, especially Vera, who grew up in a trailer park and discovered professional balloon-twisting as a way to get off welfare and put herself through college. But what’s amazing, what’s really amazing, are the incredible sculptures, tricks, giant floats, and other clever things you can do with a balloon. It defies explanation how utterly entertaining this is. 2007 South by Southwest Film Festival.

Gary Bradley is an ambitious west Texas farm boy who becomes an Austin real estate developer and skillfully capitalizes on the growth of this 1970s boomtown. At the peak of his powers, he transforms 4,000 acres of pristine Hill Country into one of the state’s largest and fastest-selling subdivisions. When the development threatens a

treasure of Austin, Barton Springs, a naturally spring-fed swimming hole and limestone aquifer, the community fights back. The drama that unfolds combines urban sprawl, the savings & loan crisis of the 1980s, a multinational mining company, the Texas Legislature, and a lot of zoning loopholes. “One of the most extraordinary accomplishments in recent American nonfiction filmmaking. It hits hard as to facts, and opens its eyes to inexpressible mysteries. It strikes a clear moral and philosophical stance, and then — as part of that philosophical stance, actually — reveals its villain as a tragic and sympathetic figure. It’s a tale of breathtaking, anti-democratic evil worthy of Chinatown, but The Unforeseen is something richer and less easy to categorize than a fatalistic fable of capitalist greed and political corruption.” — Andrew O’Hehir, Salon.com. Winner, Truer Than Fiction Award, 2007 Spirit Awards. 2007 Sundance, South by Southwest, Woodstock, Vancouver, London Film Festivals.

From the director of Cinema Paradiso comes this new film, opening with a sequence that only comes into play much later in the film: an sinister audition of nude women clearly being selected for a particular task. As the main action begins, a woman named Irina is casing the neighborhood in this northern Italian town, renting an apartment in the jeweler’s district with a fat wad of cash. Played with brilliant intensity by Russian actress Xenia Rappoport, Irina takes a job cleaning floors in an adjacent building, where the wealthy jewelers the Adachers live with their young daughter. Little by little she finds ways to get

This wrenching first film is an exquisite story of a woman at the bridge into middle age, looking for a path that will guide her through the coming years. Anna has accepted the invitation to stay with two other couples at a rented Tuscan villa. When Anna arrives without her husband, an awkwardness hangs in the air. We become used to dealing with couples as pairs, and breaking up the set changes the social dynamic. In this case, Anna spends more time with the teenage sons and daughter of the other couples, especially Oakley, a confident, handsome college boy who doesn’t mind flirting a bit with Anna. Director Hogg “is stirring the strong flavours of Chabrol, Ozu and Rohmer into her British dish to great effect. Subtexts, or the real meanings, of people’s superficial and sparingly used words are teased out and she is adept at holding the camera on (Kathryn) Worth while conversations and actions take place beyond the static frame. Everything that might be going on is conveyed, but it is the effects of this on Anna that enthral the attention here.” — Paul Griffiths, Eyeforfilm.co.uk. Winner, FIPRESCI Prize, 2007 London Film Festival.

Presented with the UW Mosse/Weinstein Center for Jewish Studies.