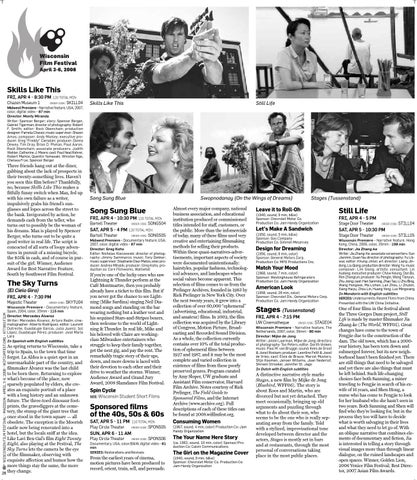 Three friends hang out at the diner, gabbing about the lack of prospects in their twenty-something lives. Haven’t you seen this film before? Thankfully, no, because Skills Like This makes a fitfully funny switch when Max, fed up with his own failure as a writer, impulsively grabs his friend’s sunglasses and lopes across the street to the bank. Invigorated by action, he demands cash from the teller, who turns out to possibly be the woman of his dreams. Max is played by Spencer Berger, who turns out to be quite a good writer in real life. The script is concocted of all sorts of loopy adventures in pursuit of a missing bicycle, the $50k in cash, and of course in pursuit of the girl. Winner, Audience Award for Best Narrative Feature, South by Southwest Film Festival.

As spring returns to Wisconsin, take a trip to Spain, to the town that time forgot. La Aldea is a quiet spot in an unremarkable part of the country, and filmmaker Álvarez was the last child to be born there. Returning to explore what’s become of the place, now sparsely populated by elders, she creates an exquisite portrait of a place with a long history and an unknown future. The three-toed dinosaur footprints, the gravediggers at the cemetery, the stump of the giant tree that once stood in the town square — all obsolete. The exception is the Moorish castle now being renovated into a hotel, but the locals sniff at the idea. Like Lavi Ben Gal’s film Eight Twenty Eight, also playing at the Festival, The Sky Turns lets the camera be the eye of the filmmaker, observing with exquisite affection and humor how the more things stay the same, the more 28 they change.

Swopnodanay (On the Wings of Dreams)

Almost every major company, national business association, and educational institution produced or commissioned titles intended for staff, customers, or the public. More than the infomercials of today, many of these films used very creative and entertaining filmmaking methods for selling their products. Within these quasi-narratives-advertisements, important aspects of society were documented unintentionally: hairstyles, popular fashions, technological advances, and landscapes where social values become apparent. This selection of films comes to us from the Prelinger Archives, founded in 1983 by Rick Prelinger in New York City. Over the next twenty years, it grew into a collection of over 60,000 “ephemeral” (advertising, educational, industrial, and amateur) films. In 2002, the film collection was acquired by the Library of Congress, Motion Picture, Broadcasting and Recorded Sound Division. As a whole, the collection currently contains over 10% of the total production of ephemeral films between 1927 and 1987, and it may be the most complete and varied collection in existence of films from these poorly preserved genres. Program curated by Amy Sloper, UW graduate and Assistant Film conservator, Harvard Film Archive. Notes courtesy of Rick Prelinger, The Field Guide to Sponsored Films, and the Internet Archive (www.archive.org). Full descriptions of each of these titles can be found at 2008.wifilmfest.org.

If you’re one of the lucky ones who saw Lightning & Thunder perform at the Café Montmartre, then you probably already have a ticket to this film. But if you never got the chance to see Lightning (Mike Sardina) singing Neil Diamond songs and standing on the bar wearing nothing but a leather vest and his sequined Stars-and-Stripes boxers, then welcome to the world of Lightning & Thunder. In real life, Mike and his beloved wife Claire are workingclass Milwaukee entertainers who struggle to keep their family together, get the next gig, and pay the rent. The remarkably tragic story of their ups, down, and more downs is laced with their devotion to each other and their drive to weather the storms. Winner, Audience Award and Grand Jury Award, 2008 Slamdance Film Festival.

From the earliest years of cinema, motion pictures have been produced to record, orient, train, sell, and persuade.

A distinctive narrative style marks Stages, a new film by Mijke de Jong (Bluebird, WFF06). The story is about Roos and Martin, who are divorced but not yet detached. They meet occasionally, bringing up old arguments and puzzling through what to do about their son, who seems to be the one who is really separating away from the family. Told with a stylized, improvisational tone developed between director and the actors, Stages is mostly set in bars and at restaurants, through the most personal of conversations taking place in the most public places.

One of four films in the festival about the Three Gorges Dam project, Still Life is made by master filmmaker Jia Zhang-ke (The World, WFF05). Great changes have come to the town of Fengjie due to the construction of the dam. The old town, which has a 2000year history, has been torn down and submerged forever, but its new neighborhood hasn’t been finished yet. There are still things that need to be salvaged and yet there are also things that must be left behind. Such life-changing choices face both Sanming, a miner traveling to Fengjie in search of his exwife of 16 years, and Shen Hong, a nurse who has come to Fengjie to look for her husband who she hasn’t seen in two years. Both Sanming and Shen will find who they’re looking for, but in the process they too will have to decide what is worth salvaging in their lives and what they need to let go of. With an oblique narrative that combines elements of documentary and fiction, Jia is interested in telling a story through visual images more than through linear dialogue, on the ruined landscapes and open spaces. Winner, Golden Lion, 2006 Venice Film Festival; Best Director, 2007 Asian Film Awards.