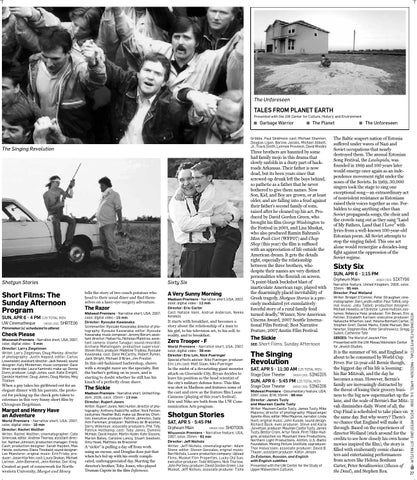 TALES FROM PLANET EARTH Presented with the UW Center for Culture, History, and Environment

When a guy takes his girlfriend out for an elegant dinner with his parents, the protocol for picking up the check gets taken to extremes in this very funny short film by Chicagoan Ziegelman.

Created as part of coursework for Northwestern University, Margot and Henry

tells the story of two couch potatoes who head to their usual diner and find themselves on a laser-eye-surgery adventure.

In this old-fashioned barbershop, shaves with a straight razor are the specialty. But the barber’s getting on in years, and is starting to doubt whether he still has his knack of a perfectly clean shave.

A “sickie” is pulling a day off from work using an excuse, and Douglas does just that when he’s fed up with his overly complicated, underappreciated day. Starring the director’s brother, Toby Jones, who played Truman Capote in the film Infamous.

It starts with breakfast, and becomes a story about the relationship of a man to his girl, to his television set, to his self, to reality, and to breakfast.

In the midst of a devastating giant monster attack on Greenside City, Bryan decides to leave his position as the head scientist of the city's military defense force. This film was shot in Madison and features some of the cast and crew as the feature film Loose Cannons (playing at this year’s festival). Eric and Niko are both from the UW Communication Arts program.

Three brothers are haunted by some bad family mojo in this drama that slowly unfolds in a dusty part of backroads Arkansas. Their father is now dead, but its been years since that screwed-up drunk left the boys behind, so pathetic as a father that he never bothered to give them names. Now Son, Kid, and Boy are grown, or at least older, and are falling into a feud against their father’s second family of sons, raised after he cleaned up his act. Produced by David Gordon Green, who brought his film George Washington to the Festival in 2001, and Lisa Muskat, who also produced Ramin Bahrani’s Man Push Cart (WFF07) and Chop Shop (this year) the film is suffused with an appreciation of life outside the American dream. It gets the details right, especially the relationship between the three brothers, who despite their names are very distinct personalities who flourish on screen. “A point-blank buckshot blast of inarticulate American rage, played with the disarmingly placid inevitability of Greek tragedy, Shotgun Stories is a precisely modulated yet cumulatively forceful story of a rural family feud turned deadly.” Winner, New American Cinema Award, 2007 Seattle International Film Festival; Best Narrative Feature, 2007 Austin Film Festival.

The Baltic seaport nation of Estonia suffered under waves of Nazi and Soviet occupations that nearly destroyed them. The annual Estonian Song Festival, the Laulupidu, was founded in 1869 and 100 years later would emerge once again as an independence movement right under the noses of the Soviets. In 1969, 30,000 singers took the stage to sing one exceptional song—an extraordinary act of nonviolent resistance as Estonians raised their voices together as one. Forbidden to sing anything other than Soviet propaganda songs, the choir and the crowds rang out as they sang “Land of My Fathers, Land that I Love” with lyrics from a well-known 100-year-old Estonian poem. All Soviet attempts to stop the singing failed. This one act alone would reenergize a decades-long fight against the oppression of the Soviet regime.

It is the summer of ’66, and England is about to be consumed by World Cup Fever. For 12-year-old Bernie though, the biggest day of his life is looming: his Bar Mitzvah, and the day he becomes a man. However, Bernie’s family are increasingly distracted by the threat of losing their grocery business to the big new supermarket up the lane, and the scale of Bernie’s Bar Mitzvah diminishes daily. Worst of all, the Cup Final is scheduled to take place on the same day. But why worry? There’s no chance that England will make it through. Based on the experiences of director Weiland (stick around for the credits to see how closely his own home movies inspired the film), the story is filled with exuberantly comic characters and entertaining performances from actors like Helena Bonham Carter, Peter Serafinowicz (Shaun of the Dead), and Stephen Rea. 27