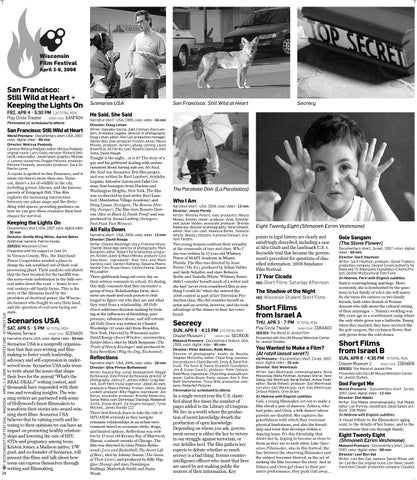 A coyote is spotted in San Francisco, and it turns out there’s more than one. Turns out, there’s a lot of wildlife in the city, including grouse, falcons, and the famous parrots of Telegraph Hill. This film explores the increasing intersection between our urban maps and the dwindling wild spaces, providing guidance on how we can give these creatures their best chance for survival.

Keeping the Lights On

In Vernon County, Wis., the Dairyland Power Cooperative needed a place to dump the ash scrubbed out of their coal processing plant. Their analysts calculated that the best location for the landfill was the acres-wide indentation in the hills several miles down the road — home to several century-old family farms. This is the story of the dilemma faced by the providers of electrical power, the Wisconsin farmers who fought to save their land, and the question of coal now facing our state.

Scenarios USA is a nonprofit organization that that uses writing and filmmaking to foster youth leadership, advocacy and self-expression in underserved teens. Scenarios USA asks teens to write about the issues that shape their lives for the annual “What’s the REAL DEAL?” writing contest, and thousands have responded with their raw and revealing insights. The winning writers are partnered with some of Hollywood’s finest filmmakers to transform their stories into award-winning short films. Scenarios USA believes that by valuing youth and listening to their opinions we can have an impact on promoting healthy relationships and lowering the rate of HIV, STDs and pregnancy among teens. Kristen Joiner, a Madison native, UW grad, and co-founder of Scenarios, will present this films and talk about how teens can express themselves through writing and filmmaking.

Tonight is the night... or is it? The story of a guy and his girlfriend dealing with embarrassment about having safe sex. He Said, She Said was Scenarios’ first film project, and was written by Ravi Lambert, Aristides Legakis, Salvador Garcia and Zakii Cotman, four teenagers from Harlem and Washington Heights, New York. The film was co-directed by lead writer Ravi Lambert (Manhattan Village Academy) and Doug Liman (Swingers, The Bourne Identity, Jumper). The film stars Rosario Dawson (Men in Black II, Death Proof) and was produced by Avram Ludwig (Swingers; Fast Food, Fast Women).

Three girlfriends hang out every day on their subway commute to school. It’s during this daily commute that they encounter a group of boys. Relationships form, decisions are made and each person is challenged to figure out who they are and what they want from a relationship. All Falls Down addresses decision-making by looking at the influences of friendship, peer pressure, substance abuse, and self-esteem. All Falls Down was written by Chantel Woolridge (15 years old) from Brooklyn, New York. Directed by Wisconsin native David Koepp (Secret Window; screenwriter, Spider-Man), shot by Mark Benjamin (The Trials of Henry Kissinger) and produced by Ezra Swerdlow (Wag the Dog, Enchanted).

Three best friends learn to take the risk of HIV/AIDS seriously as they navigate romantic relationships in an urban environment mired in economic strife, drugs, and limited options. Reflections was written by 17-year old Keyana Ray of Maywood, Illinois, a suburb outside of Chicago. The film was directed by Gina Prince-Bythewood (Love and Basketball, The Secret Life of Bees), shot by Johnny Jensen (The Game of Their Lives), and produced by Billy Higgins (Honey) and stars Dominique Stallings, Madeekah Smith and Itasia Wyatt.

Two young women confront their sexuality at the crossroads of race and class. Who I Am was written by 17-year-old Whitney Peters of MAST Academy in Miami, Florida. The film was directed by Jesse Peretz (The Ex), produced by Julian Valdes and Andy Schefter, and stars Rebecca Borbe and Tashelle Whyte. Whitney Peters didn’t consider herself much of a writer and she had “never even considered film as anything I could do” when she entered the 2006 contest as part of her Television Production class. She did consider herself an artist and an activist, however, and she took advantage of the chance to have her voice heard.

points in legal history are clearly and satisfyingly described, including a case at Abu Graib and the landmark U.S. v. Reynolds trial that became the government’s precedent for questions of classified information. 2008 Sundance Film Festival.

The Shadow of the Night SEE: Wisconsin Student Short Films

In a single recent year the U.S. classified about five times the number of pages added to the Library of Congress. We live in a world where the production of secret knowledge dwarfs the production of open knowledge. Depending on whom you ask, government secrecy is either the key to victory in our struggle against terrorism, or our Achilles heel. The film gathers key experts to debate whether so much secrecy is a bad thing: former counterintelligence officers who insist that lives are saved by not making public the sources of their information. Key

Gali, a young filmmaker, set out to make a film about a pair of dancers: Zehava, who had polio, and Oren, a folk dancer whose parents are disabled. She captures the gracefulness with which they overcome physical limitations, and also the friendship and trust that develops within a dancing team. It’s this friendship that draws her in, hoping to become as close to them as they are to each other. Like Operation Filmmaker, also in this festival, the line between the observing filmmaker and the subject becomes blurred, as the act of making the film becomes the story. And as Zehava and Oren get closer to their premiere performance, they push Gali away....

Sarit is contemplating marriage. More accurately, she is bombarded by the questions in her family of when she will marry. So she turns the camera on two family friends, both older Jewish of Persian descent who talk about the cultural setting of their marriages — Naima’s wedding was fifty years ago in a resettlement camp where the only white gown was a bathrobe. Young when they married, they have survived like the gole sangam, the cyclamen flower that only grows from the cold stones.

SERIES: The World of Jewish Film Presented with the UW Mosse/Weinstein Center for Jewish Studies.

A visual tribute to the filmmaker’s aging aunt, to the details of her home, and to the connections that run through family.