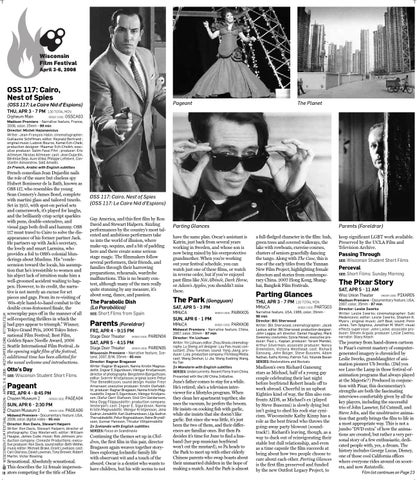 French comedian Jean Dujardin nails the role of the suave but clueless spy Hubert Bonisseur de la Bath, known as OSS 117, who resembles the young Sean Connery’s James Bond, complete with martini glass and tailored tuxedo. Set in 1955, with spot-on period sets and camerawork, it’s played for laughs, and the brilliantly crisp script sparkles with puns, double-entendres, and visual gags both droll and hammy. OSS 117 must travel to Cairo to solve the disappearance of his former partner Jack. He partners up with Jack’s secretary, the lovely and smart Larmina, who provides a foil to OSS’s colonial blunderings about Muslims. His “condescension toward the locals, his assumption that he’s irresistible to women and his abject lack of intuition make him a well-groomed accident waiting to happen. However, to its credit, the narrative is not merely an excuse for set pieces and gags. From its re-visiting of ’60s-style hand-to-hand combat to the double cross-festooned finale, the screenplay pays off in the manner of all self-respecting thrillers in which the bad guys appear to triumph.” Winner, Tokyo Grand Prix, 2006 Tokyo International Film Festival; Best Film, Golden Space Needle Award, 2006 Seattle International Film Festival. As the opening night film of the festival, additional time has been allotted for the usual welcome and introductions.

Sensational. Absolutely sensational. This describes the 52 female imperson18 ators competing for the title of Miss

OSS 117: Cairo, Nest of Spies (OSS 117: Le Caire Nid d’Espions) Gay America, and this first film by Ron David and Stewart Halpern. Sizzling performances by the country’s most talented and ambitious performers take us into the world of illusion, where make-up, sequins, and a bit of padding here and there create some serious stage magic. The filmmakers follow several performers, their friends, and families through their harrowing preparations, rehearsals, wardrobe malfunctions. This is no beauty contest, although many of the men really quite stunning by any measure, it’s about song, dance, and passion.

Continuing the themes set up in Children, the first film in this pair, director Bragason again weaves together storylines exploring Icelandic family life with observant wit and a touch of the absurd. Oscar is a dentist who wants to have children, but his wife seems to not

a full-fledged character in the film: lush, green trees and covered walkways, the lake with rowboats, exercise courses, clusters of seniors gracefully dancing the tango. Along with The Case, this is one of the early titles from the Yunnan New Film Project, highlighting female directors and stories from comtemporary China. 2007 Hong Kong, Shanghai, Bangkok Film Festivals.

have the same plan. Oscar’s assistant is Katrin, just back from several years working in Sweden, and whose son is now being raised by his overprotective grandmother. When you’re working out your festival schedule, you can watch just one of these films, or watch in reverse order, but if you’ve enjoyed past films like Nói Albínói, Dark Horse, or Adam’s Apples, you shouldn’t miss these.

June’s father comes to stay for a while. He’s retired; she’s a television interviewer for a lifestyles program. When they clean her apartment together, she uses the vacuum, he prefers the broom. He insists on cooking fish with garlic, while she insists that she doesn’t like garlic. But since she was little, it’s just been the two of them, and their differences are familiar ones. But then Pa decides it’s time for June to find a husband (her pop musician boyfriend won’t cut the mustard), so Pa heads to the Park to meet up with other elderly Chinese parents who swap boasts about their unmarried children in the hope of making a match. And the Park is almost

Madison’s own Richard Ganoung stars as Michael, half of a young gay couple celebrating their last night before boyfriend Robert heads off to work abroad. Cheerful in an upbeat Eighties kind of way, the film also confronts AIDS, as Michael’s ex (played by Steve Buscemi) is slowly dying but isn’t going to shed his rock star cynicism. Wisconsinite Kathy Kinny has a role as the best friend who throws the going-away party blowout (soundtrack!). Richard’s leaving, though, as a way to duck out of reinvigorating their stable but dull relationship, and even as a time capsule the film succeeds at being about how two people choose to care about each other. Parting Glances is the first film preserved and funded by the new Outfest Legacy Project, to

The journey from hand-drawn cartoon to Pixar’s current mastery of computergenerated imagery is chronicled by Leslie Iwerks, granddaughter of animation pioneer Ub Iwerks. (Did you see Luxo the Lamp in those festival-ofanimation programs that always played at the Majestic?) Produced in conjunction with Pixar, this documentary’s strengths are both the fascinating interviews comfortably given by all the key players, including the successful trio of John Lasseter, Ed Catmull, and Steve Jobs, and the unobtrusive animation that gently brings the film to life in a most appropriate way. This is not a jumbo “DVD extra” of how the animations are created, but rather a very personal story of a few enthusiastic, dedicated people with, yes, a dream. The history includes George Lucas, Disney, one of those cool California offices where everyone rides around on scooters, and now Ratatoille. Film list continues on Page 23