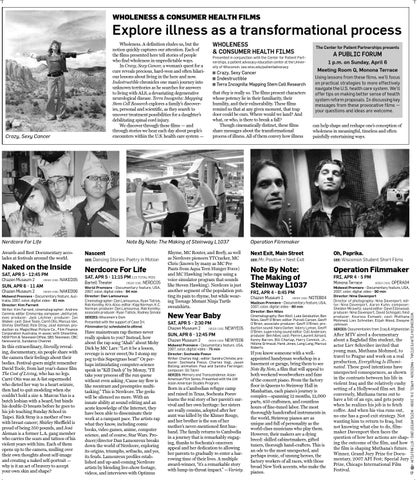 Explore illness as a transformational process Wholeness. A definition eludes us, but the notion quickly captures our attention. Each of the films presented here tell stories of people who find wholeness in unpredictable ways. In Crazy, Sexy Cancer, a woman’s quest for a cure reveals precious, hard-won and often hilarious lessons about living in the here and now. Indestructible chronicles one man’s journey into unknown territories as he searches for answers to living with ALS, a devastating degenerative neurological disease. Terra Incognita: Mapping Stem Cell Research explores a family’s discoveries, personal and scientific, as they search to uncover treatment possibilities for a daughter’s debilitating spinal cord injury. We discover through these films — and through stories we hear each day about people’s encounters within the U.S. health care system —

Presented in conjunction with the Center for Patient Partnerships, a patient advocacy education center at the University of Wisconsin. law.wisc.edu/patientadvocacy

that they is really us. The films present characters whose potency lie in their familiarity, their humility, and their vulnerability. These films remind us that at any given moment, that trap door could be ours. Where would we land? And what, or who, is there to break a fall? Though cinematically distinct, these films share messages about the transformational process of illness. All of them convey how illness

Note By Note: The Making of Steinway L1037

Awards and Best Documentary accolades at festivals around the world.

In this extraordinary, literally revealing, documentary, six people share with the camera their feelings about their bodies. Festival-goers might remember David Toole, from last year’s dance film The Cost of Living, who has no legs. Carré Otis was an A-list supermodel who dieted her way to a heart seizure, then had to quit modeling when she couldn’t hold a size 4. Marcus Van is a butch lesbian with a beard, but binds his double-D breasts before he goes to his job teaching Sunday School in Taipei. Rick Stray is a mother of two with breast cancer; Shirley Sheffield is proud of being 350 pounds, and José Aleman is a former L.A. gang member who carries the scars and tattoos of his violent years with him. Each of them opens up to the camera, mulling over their own thoughts about self-image and creating a naked self-portrait — why is it an act of bravery to accept your own skin and shape?

Have mainstream rap themes never really spoken to you? Instead, how about the rap song “Ahab” about Moby Dick by MC Lars: “Let it be a lesson, revenge is never sweet/So I stomp my peg to this Supergrass beat!” Or perhaps intimidating computer-science speak in “Kill Dash 9” by Monzy, “I’ll take your process off the run queue without even asking /Cause my flow is like reentrant and preemptive multitasking.” This is Nerdcore. The geeks will be silenced no more. With an innate ability at sound editing and an acute knowledge of the Internet, they have been able to disseminate their work at a rampant pace. The artists rap what they know, including comic books, video games, anime, computer science, and of course, Star Wars. Producer/director Dan Lamoureux breaks down the world of Nerdcore, exploring its origins, triumphs, setbacks, and yes, its feuds. Lamoureux profiles established and up-and-coming Nerdcore artists by blending live-show footage, videos, and interviews with Optimus

Rhyme, MC Router, and Beefy, as well as Nerdcore pioneers YTCracker, MC Chris (known by many as MC Pee Pants from Aqua Teen Hunger Force) and MC Hawking (who raps using a voice simulator program that sounds like Steven Hawking). Nerdcore is just another segment of the population putting its pain to rhyme, but while wearing Teenage Mutant Ninja Turtle sweatshirts.

Born in a Cambodian refugee camp and raised in Texas, Socheata Poeuv learns the real story of her parent’s survival and her own heritage: her sisters are really cousins, adopted after her aunt was killed by the Khmer Rouge, and her brother is the son of her mother’s never-mentioned first husband. The family returns to Cambodia in a journey that is remarkably engaging, thanks to Socheata’s onscreen appeal and her dedication to allowing her parents to gradually re-enter a harrowing time of their lives. A multiple award-winner, “it’s a remarkable story with lump-in-throat impact.” —Variety.

Note By Note: The Making of Steinway L1037

If you know someone with a wellappointed handyman workshop in a basement or garage, bring them to see Note By Note, a film that will appeal to both weekend woodworkers and fans of the concert piano. From the factory floor in Queens to Steinway Hall in Manhattan, each piano’s journey is complex—spanning 12 months, 12,000 parts, 450 craftsmen, and countless hours of fine-tuned labor. The most thoroughly handcrafted instruments in the world, Steinway pianos are as unique and full of personality as the world-class musicians who play them. However, their makers are a dying breed: skilled cabinetmakers, gifted tuners, thorough hand-crafters. This is an ode to the most unexpected, and perhaps ironic, of unsung heroes, the factory workers of all races, with those broad New York accents, who make the pianos.

After MTV aired a documentary about a Baghdad film student, the actor Liev Schreiber invited that young man, Muthana Mohmed, to travel to Prague and work on a real production, Everything Is Illuminated. These good intentions have unexpected consequences, as shown in the contrasts between his life in violent Iraq and the relatively cushy setting of a Hollywood film set. But conversely, Muthana turns out to have a bit of an ego, and gets pouty when he realizes his job is to fetch coffee. And when his visa runs out, no one has a good exit strategy. Not wanting him to return to Iraq, but not knowing what else to do, filmmaker Davenport then faces the question of how her actions are shaping the outcome of the film, and how the film is shaping Muthana’s future. Winner, Grand Jury Prize for Documentary, 2007 AFI Fest; Special Jury Prize, Chicago International Film Festival.

The Center for Patient Partnerships presents