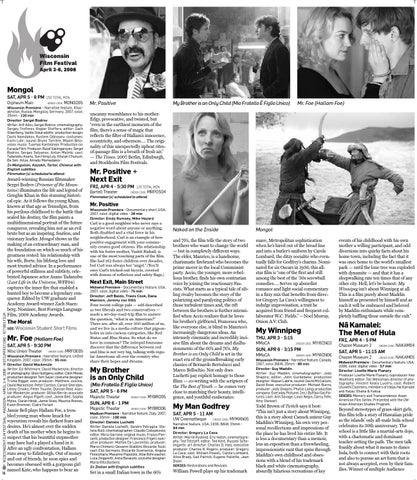 Award-winning Russian filmmaker Sergei Bodrov (Prisoner of the Mountains) illuminates the life and legend of Genghis Khan in this stunning historical epic. As it follows the young Khan, known at that age as Temudgin, from his perilous childhood to the battle that sealed his destiny, the film paints a multidimensional portrait of the future conqueror, revealing him not as an evil brute but as an inspiring, fearless, and visionary leader. Mongol shows us the making of an extraordinary man, and the foundation on which so much of his greatness rested: his relationship with his wife, Borte, his lifelong love and most trusted advisor. In a performance of powerful stillness and subtlety, celebrated Japanese actor Asano Tadanobu (Last Life in the Universe, WFF04) captures the inner fire that enabled a hunted boy to become a legendary conqueror. Edited by UW graduate and Academy Award-winner Zach Staenberg. Nominee, Best Foreign Language Film, 2008 Academy Awards.

Jamie Bell plays Hallam Foe, a troubled young man whose knack for voyeurism reveals his darkest fears and desires. He’s almost over the sudden death of his mother when he begins to suspect that his beautiful stepmother may have had a played a hand in it. After an ugly confrontation, Hallam runs away to Edinburgh. Out of money and out of friends, he soon spies and becomes obsessed with a gorgeous girl named Kate, who happens to bear an

My Brother is an Only Child (Mio Fratello È Figlio Unico)

uncanny resemblance to his mother. Edgy, provocative, and twisted, but “even in the earthiest moments of the film, there’s a sense of magic that reflects the filter of Hallam’s innocence, eccentricity, and otherness…. The originality of this unexpectedly upbeat ritesof-passage film is a breath of fresh air.” — The Times. 2007 Berlin, Edinburgh, and Stockholm Film Festivals.

Carl is a good neighbor who never says a negative word about anyone or anything. Both disabled and a vital force in his neighborhood, Carl is an example of how positive engagement with your community creates good citizens. His relationship with his foster mother, Vashti Rishall, is one of the most touching parts of the film. She had 162 foster children over decades, but Carl was always her “angel.” (You’ll envy Carl’s tricked-out bicycle, covered with dozens of reflectors and safety flags.)

suave, Metropolitan sophistication when he’s hired out of the bread line and into a butler’s uniform by Carole Lombard, the ditzy socialite who eventually falls for Godfrey’s charms. Nominated for six Oscars in 1936, this allstar film is “one of the first and still among the best of the ’30s screwball comedies…. Serves up absurdist romance and light social commentary in a fizzy mix that benefits from director Gregory La Cava’s willingness to indulge improvisation, a trait he acquired from friend and frequent collaborator W.C. Fields.” —Noel Murray, Onion A.V. Club.

Four recent college pals — self-described as two liberals and two conservatives — made a 40-day-road-trip film to answer the question, “what is an American?” There are, after all, over 300 million of us, and we live in a media culture that pigeonholes us into curious categories, like Red States and Blue States. So what do we have in common? The intrepid foursome discover that the difference between red and blue is not very big, talking with regular Americans all over the country who share their hopes and dreams.

and 70’s, the film tells the story of two brothers who want to change the world — but in completely different ways. The elder, Manrico, is a handsome, charismatic firebrand who becomes the prime mover in the local Communist party. Accio, the younger, more rebellious brother, finds his own contrarian voice by joining the reactionary Fascists. What starts as a typical tale of sibling rivalry becomes the story of the polarizing and paralyzing politics of those turbulent times and, the rift between the brothers is further intensified when Accio realizes that he loves his brother’s girlfriend, Francesca who, like everyone else, is blind to Manrico’s increasingly dangerous ideas. An intensely cinematic and incredibly incisive film about the dreams and disillusionments of the 60’s and 70’s, My Brother is an Only Child is set in the exact era of the groundbreaking early classics of Bernardo Bertolucci and Marco Bellochio. Not only does Luchetti pay explicit homage to those films — co-writing with the scripters of the The Best of Youth — he comes very close to matching their beauty, intelligence, and youthful exuberance.

Naked on the Inside

Set in a small Italian town in the 60’s

William Powell plays up his trademark

Todd Brown of Twitch says it best: “This isn’t just a story about Winnipeg, this is a story about Canuck auteur Guy Maddin’s Winnipeg, his own very personal recollections and impressions of the place he has lived his entire life. It is less a documentary than a memoir, less an exposition than a freewheeling, impressionistic rant that spins through Maddin’s own childhood and obsessions with a blend of his trademark black and white cinematography, absurdly hilarious recreations of key

events of his childhood with his own mother a willing participant, and odd diversions into quirky facts about his home town, including the fact that it was once home to the world’s smallest park — until the lone tree was exploded with dynamite — and that it has a sleepwalking rate ten times that of any other city. Hell, let’s be honest: My Winnipeg isn’t about Winnipeg at all. This is a film purely about Maddin himself as presented by himself and as such it will be embraced and beloved by Maddin enthusiasts while completely baffling those outside the cult.”

Beyond stereotypes of grass-skirt girls, this film tells a story of Hawaiian pride as the islands’ only all-male hula school celebrates its 30th anniversary. The school is a little like a martial-arts dojo, with a charismatic and dominant teacher setting the path. The men talk frankly about what it means to dance hula, both to connect with their roots and also to pursue an art form that is not always accepted, even by their families. Winner of multiple Audience