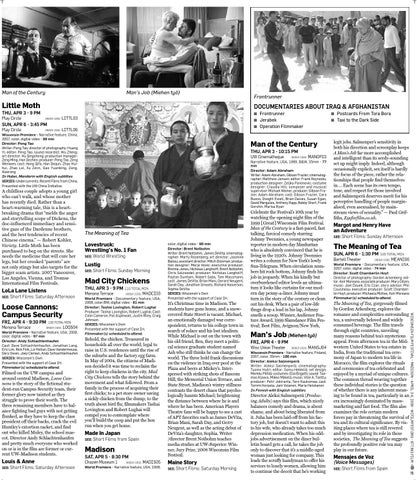 Man of the Century

A childless couple adopts a young girl who can’t walk, and whose mother has recently died. Rather than a heart-warming tale, this is a heartbreaking drama that “melds the anger and storytelling scope of Dickens, the doc-influenced immediacy and sensitive gaze of the Dardenne brothers, and the best tendencies of recent Chinese cinema.” — Robert Kohler, Variety. Little Moth has been purchased to beg on the streets. She needs the medicine that will cure her legs, but her crooked “parents” are not only stingy but also targets for the bigger scam artists. 2007 Vancouver, Los Angeles, Vienna, and Tromsø International Film Festivals. SEE: Short Films: Saturday Afternoon

Filmed on the UW campus and around central Madison, Loose Cannons is the story of the fictional student-run Campus Security team, their former glory now tainted as they struggle to prove their worth. The three remaining members have to balance fighting bad guys with not getting flunked, as they have to keep the class president off their backs, crack the evil Huntley’s extortion racket, and find out who killed Muley, the school mascot. Director Andy Schlachtenhaufen and pretty much everyone who worked on or is in the film are former or current UW-Madison students.

■ Taxi to the Dark Side

Behold, the chicken. Treasured in households all over the world; legal to raise in U.S. residences until the rise of the suburbs and the factory egg farm. In May of 2004, the citizens of Madison decided it was time to reclaim the right to keep chickens in the city. Mad City Chickens tells the story behind the movement and what followed. From a family in the process of acquiring their first chicks; to a pet store owner saving a sickly chicken from the dump; to the truth about bird flu; filmmakers Tashai Lovington and Robert Lughai will compel you to contemplate where you’ll build the coop and put the hen run when you get home.

Made In Japan SEE: Short Films from Spain

It’s Christmas time in Madison. The students have gone home, and a snowcovered State Street is vacant. Michael, an emotionally damaged war correspondent, returns to his college town in search of solace and his lost idealism. While Michael is out on the town with his old friend, Ben, they meet a political science graduate student named Ash who still thinks he can change the world. The three hold frank discussions on the violence in Iraq over pool at the Plaza and beers at Mickey’s. Interspersed with striking shots of Bascom Hill, the Memorial Union Terrace, and State Street, Madison’s wintry stillness contrasts the desert chaos that psychologically haunts Michael; heightening the distance between where he is and where he has been. American Players Theatre fans will be happy to see a cast of APT favorites such as James DeVita, Brian Mani, Sarah Day, and Gerry Neugent, as well as the acting debut of DeVita’s daughter, Sophia. Writer /director Brent Notbohm teaches media studies at UW-Superior. Winner, Jury Prize, 2008 Wisconsin Film Festival.

Celebrate the Festival’s 10th year by watching the opening night film of the 1999 [Great] Wisconsin Film Festival. Man of the Century is a fast-paced, fast talking, farcical comedy starring Johnny Twennies, a young newspaper reporter in modern day Manhattan who is absolutely convinced that he is living in the 1920’s. Johnny Twennies writes a column for New York’s lowly Sun-Telegram. When circulation numbers hit rock bottom, Johnny finds his job in jeopardy. When his kindly but overburdened editor levels an ultimatum it looks like curtains for our modern day penny-a-liner. Johnny must turn in the story of the century or clean out his desk. When a pair of low-life thugs drop a lead in his lap, Johnny smells a scoop. Winner, Audience Feature Award, 1999 Slamdance Film Festival; Best Film, Avignon/New York,

Director Aleksi Salmenperä (Producing Adults) says this film, which nicely balances comedy and drama, is about shame, and about being liberated from it. Juha has been laid-off from his factory job, but doesn’t want to admit this to his wife, who already takes too much depression medication. When his oddjobs advertisement on the diner bulletin board gets a call, he takes the job only to discover that it’s a middle-aged woman just looking for company. This leads the scruffy handyman to offer his services to lonely women, allowing him to continue the deceit that he’s working

legit jobs. Salmenper’s sensitivity in both his direction and screenplay keeps A Man’s Job far more accomplished and intelligent than its seedy-sounding set up might imply. Indeed, although occasionally explicit, sex itself is hardly the focus of the piece, rather the relationships that people find themselves in…. Each scene has its own tempo, tone, and respect for those involved and Salmenperä deserves merit for his perceptive handling of people marginalised, even asexualised, by mainstream views of sexuality.” — Paul Griffiths, Eyeforfilm.co.uk.

The Meaning of Tea, gorgeously filmed by Gordon Arkenberg, explores the romance and complexities surrounding tea, a universally beloved and widely consumed beverage. The film travels through eight countries, unveiling many reasons behind tea’s mysterious appeal. From afternoon tea in the Midwestern United States to tea estates in India, from the traditional tea ceremony of Japan to modern tea life in Morocco, the film explores the rituals and ceremonies of tea celebrated and enjoyed by a myriad of unique cultures. The common thread weaving together these individual stories is the question of whether there is any inherent meaning to be found in tea, particularly in an era increasingly dominated by massmarketing and fast food. The film also examines the role certain modern forces pay in threatening the survival of tea and its cultural significance. By visiting places where tea is still revered and by investigating its role in these societies, The Meaning of Tea suggests the profoundly positive role tea may play in our future.

Man of the Century