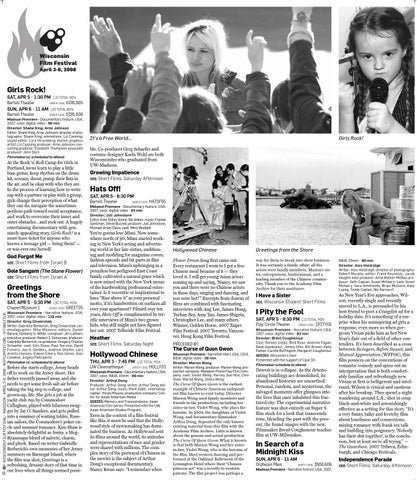 At the Rock ‘n’ Roll Camp for Girls in Portland, teens learn to play a little bass guitar, keep rhythm on the drum kit, scream, shout, pump their fists in the air, and be okay with who they are. In the process of learning how to write rap with a partner or play with a group, girls change their perception of what they can do, navigate the sometimes perilous path toward social acceptance, and work to overcome their inner and outer obstacles…and rock out. A hugely entertaining documentary with genuinely appealing story, Girls Rock! is a must-have ticket for anyone who knows a teenage girl — bring them! — or was ever one herself.

God Forgot Me SEE: Short Films from Israel B

Before she starts college, Jenny heads off to work on the Jersey shore. Her father recently passed away, and she needs to get some fresh salt air before taking the big step to college, and grown-up, life. She gets a job at the yacht club run by Commodore Callaghan, played with hilarious swagger by Jay O. Sanders, and gets pulled into a summer of waiting tables, Russian sailors, the Commodore’s poker circle and summer romance. Kim Shaw is absolutely delightful as Jenny, a MegRyanesque blend of naïveté, charm, and pluck. Based on writer Gabrielle Berberich’s own memories of her Jersey summers on Barnegat Island, where the film was shot, Greetings is a refreshing, dreamy story of that time in our lives when all things seemed possi-

ble. Co-producer Greg Schaefer and costume designer Kaela Wohl are both Wisconsinites who graduated from UW-Madison.

You’re gonna love Mimi. Now somewhere north of 90, Mimi started working in New York’s acting and advertising world in her late sixties, auditioning and modeling for magazine covers, fashion spreads and bit parts in film and television. Mimi’s upbringing in a penniless but pedigreed East Coast family cultivated a natural grace which is now mixed with the New York moxie of the hardworking professional entertainer. Is it eccentric or inspirational to have “Rise above it” as your personal motto, if it’s handwritten on surfaces all over your apartment? Filmed over ten years, Hats Off is complimented by terrific interviews of Mimi’s two grown kids, who still might not have figured her out. 2007 Telluride Film Festival.

Even in the context of a film festival like this, it must be said that the Hollywood style of moviemaking has dominated the business. As Hollywood sent its films around the world, its attitudes and representations of race and gender were shared with millions. The complex story of the portrayal of Chinese in the movies is the subject of Arthur Dong’s exceptional documentary. Nancy Kwan says: “I remember when

Greetings from the Shore

Flower Drum Song first came out. Every restaurant I went to I got a free Chinese meal because of it — they loved it. I still get young Asian actors coming up and saying, ‘Nancy, we saw you and there were no Chinese actors in those days, singing and dancing, and you were hot!’” Excerpts from dozens of films are combined with fascinating interviews with Ang Lee, James Hong, Turhan Bey, Amy Tan, James Shigeta, Christopher Lee, and many others. Winner, Golden Horse, 2007 Taipei Film Festival. 2007 Toronto, Vancouver, Hong Kong Film Festival.

way for them to break into show business. It was certainly a family affair: all the actors were family members; Marion’s sister, entrepreneur, businessman, and a leading member of the Chinese community. Thank you to the Academy Film Archive for their assistance.

As New Year’s Eve approaches, Wilson, recently single and recently moved to L.A., is persuaded by his best friend to post a Craigslist ad for a holiday date. It’s something of a surprise when his uninspiring ad gets a response, even more so when gorgeous Vivian picks him as her New Year’s date out of a field of other contenders. It’s been described as a cross between Swingers, Before Sunset, and Mutual Appreciation (WFF06), this film pounces on the conventions of romantic comedy and spins out an interpretation that is both comfortably familiar and refreshingly new. Vivian at first is belligerent and intolerant, Wilson is cynical and cautious after his breakup. They spend a night wandering around L.A., shot in crisp black-and-white and astonishingly effective as a setting for this story. “It’s a very funny, talky and kvetchy film about loneliness and connections, mixing romance with frank sex talk and building into poignancy. ‘Nobody has their shit together’, is the conclusion, but at least we’re all trying.” — The Guardian. 2007 Tribeca, Edinburgh, and Chicago Festivals.

The Curse Of Quon Gwon is the earliest example of Chinese American independent film known to exist today. Director Marion Wong used family members and friends in the production, including her sister-in-law, Violet Wong, who plays the heroine. In 2004, the daughters of Violet Wong, and documentary filmmaker Arthur Dong, deposited the only known existing material from this film with the Academy Film Archive. Little is known about the genesis and actual production The Curse Of Quon Gwon. What is known is that both Marion Wong and her sisterin-law, Violet Wong, who is the heroine of the film, liked western dancing and performed at the Oakland Ballrooom of the Lymington Hotel where their “Chinese princess act” was a novelty to western patrons. The film project was perhaps a

Detroit is in collapse. As the deteriorating buildings are demolished, its abandoned histories are unearthed. Personal, random, and mysterious, the salvaged moments offer glimpses into the lives that once inhabited this fractured city. The experimental narrative feature was shot entirely on Super 8 film stock for a look that transcends time, blending the past with the present, the found images with the new. Filmmaker Brent Coughenour teaches film at UW-Milwaukee.

In Search of a Midnight Kiss SUN, APR 6 • 11 AM Orpheum Main