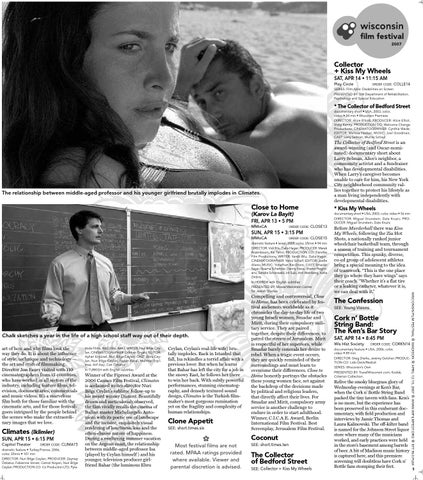 The Collector of Bedford Street is an award-winning (and Oscar-nominated) documentary short about Larry Selman, Alice’s neighbor, a community activist and a fundraiser who has developmental disabilities. When Larry’s caregiver becomes unable to care for him, his New York City neighborhood community rallies together to protect his lifestyle as a man living independently with developmental disabilities.

The relationship between middle-aged professor and his younger girlfriend brutally implodes in Climates.

Chalk sketches a year in the life of a high school staff way out of their depth. art of how and why films look the way they do. It is about the influence of style, technique and technology — the art and craft of filmmaking. Director Jon Fauer visited with 110 cinematographers from 15 countries, who have worked in all sectors of the industry, including feature films, television, documentaries, commercials and music videos. It’s a marvelous film both for those familiar with the cinematic arts, and for those festivalgoers intrigued by the people behind the scenes who make the extraordinary images that we love.

Winner of the Fipresci Award at the 2006 Cannes Film Festival, Climates is acclaimed writer-director Nuri Bilge Ceylan’s sublime follow-up to his award winner Distant. Beautifully drawn and meticulously observed, the film vividly recalls the cinema of Italian master Michelangelo Antonioni with its poetic use of landscape and the incisive, exquisitely visual rendering of loneliness, loss and the often-elusive nature of happiness. During a sweltering summer vacation on the Aegean coast, the relationship between middle-aged professor Isa (played by Ceylan himself ) and his younger, television producer girlfriend Bahar (the luminous Ebru

Ceylan, Ceylan’s real-life wife) brutally implodes. Back in Istanbul that fall, Isa rekindles a torrid affair with a previous lover. But when he learns that Bahar has left the city for a job in the snowy East, he follows her there to win her back. With subtly powerful performances, stunning cinematography, and densely textured sound design, Climates is the Turkish filmmaker’s most gorgeous rumination yet on the fragility and complexity of human relationships.

Compelling and controversial, Close to Home, has been celebrated by festival audiences worldwide as it chronicles the day-to-day life of two young Israeli women, Smadar and Mirit, during their compulsory military service. They are paired together, despite their differences, to patrol the streets of Jerusalem. Mirit is respectful of her superiors, while Smadar barely conceals her desire to rebel. When a tragic event occurs, they are quickly reminded of their surroundings and must learn to overcome their differences. Close to Home honestly portrays the obstacles these young women face, set against the backdrop of the decisions made by political and religious leaders, that directly affect their lives. For Smadar and Mirit, compulsory army service is another challenge to endure in order to start adulthood. Winner, C.I.C.A.E. Award, Berlin International Film Festival. Best Screenplay, Jerusalem Film Festival.

The Collector of Bedford Street SEE: Collector + Kiss My Wheels

Relive the smoky bluegrass glory of Wednesday evenings at Ken’s Bar, when the Cork n’ Bottle String Band packed the tiny tavern with fans. Ken’s is no more, but the experience has been preserved in this exuberant documentary, with field production and interviews by Jamie Thomas and Laura Kalinowski. The off-kilter band is named for the Johnson Street liquor store where many of the musicians worked, and early practices were held in the store’s basement among barrels of beer. A bit of Madison music history is captured here, and this premiere screening will doubtless have Cork n’ Bottle fans stomping their feet.

Before Murderball there was Kiss My Wheels, following the Zia Hot Shots, a nationally ranked junior wheelchair basketball team, through a season of training and tournament competition. This spunky, diverse, co-ed group of adolescent athletes bring a special meaning to the idea of teamwork. “This is the one place they go where they have wings” says their coach. “Whether it’s a flat tire or a leaking catheter, whatever it is, we can deal with it.”