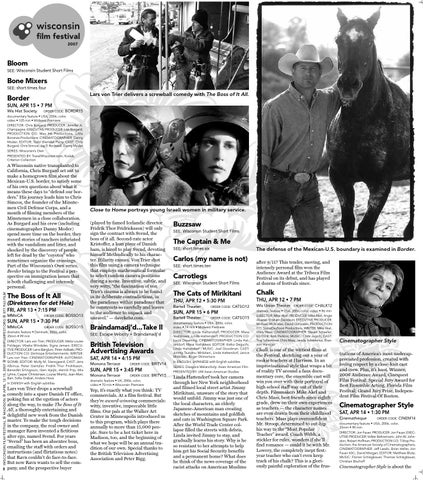 Lars von Trier delivers a screwball comedy with The Boss of It All.

A Wisconsin native transplanted to California, Chris Burgard set out to make a homegrown film about the Mexican-U.S. border, to satisfy some of his own questions about what it means these days to “defend our borders.” His journey leads him to Chris Simcox, the founder of the Minutemen Civil Defense Corps, and a month of filming members of the Minutemen in a close collaboration. As Burgard and his crew (including cinematographer Danny Moder) spend more time on the border, they record stories of ranchers infuriated with the vandalism and litter, and shocked by the discovery of people left for dead by the “coyotes” who sometimes organize the crossings. Part of the Wisconsin’s Own series, Border brings to the Festival a perspective on immigration issues that is both challenging and intensely personal.

Lars von Trier drops a screwball comedy into a spare Danish IT office, poking fun at the egotism of actors along the way, to make The Boss of It All, a thoroughly entertaining and delightful new work from the Danish master. To make the tough decisions in the company, the real owner and manager Ravn invented a fictitious alter ego, named Svend. For years “Svend” has been an absentee boss, emailing the staff with orders and instructions (and flirtatious notes) that Ravn couldn’t do face-to-face. But now Ravn wants to sell the com8 pany, and the prospective buyer

Close to Home portrays young Israeli women in military service. (played by famed Icelandic director Fridrik Thor Fridricksson) will only sign the contract with Svend, the boss of it all. Second-rate actor Kristoffer, a lean piece of Danish ham, is hired to play Svend, devoting himself Methodically to his character. Hilarity ensues. Von Trier shot this film using a camera technique that employs mathematical formulae to select random camera positions during a scene. Inventive, subtle, and very witty, “the fascination of von Trier’s cinema is always to be found in its deliberate contradictions, in the paradoxes within paradoxes that he constructs so carefully and leaves to the audience to unpack and unravel.” — davekehr.com.

Yep, it’s exactly what you think: TV commercials. At a film festival. But they’re award-winning commercials: witty, inventive, impeccable little films. Our pals at the Walker Art Center in Minneapolis introduced us to this program, which plays there annually to more than 15,000 people. Sure to be a hot ticket here in Madison, too, and the beginning of what we hope will be an annual tradition of our own. Special thanks to the British Television Advertising Association and Peter Bigg.

The Captain & Me SEE: short.times.six

The defense of the Mexican-U.S. boundary is examined in Border.

Carlos (my name is not)

after 9/11? This tender, moving, and intensely personal film won the Audience Award at the Tribeca Film Festival on its debut, and has played at dozens of festivals since.

The Cats of Mirikitani

Linda Hattendorf took her camera through her New York neighborhood and filmed local street artist Jimmy Mirikitani, unaware of the story that would unfold. Jimmy was just one of the local characters, an elderly Japanese-American man creating sketches of mountains and goldfish and cats in Washington Square Park. After the World Trade Center collapse filled the streets with debris, Linda invited Jimmy to stay, and gradually learns his story. Why is he so resistant to her attempts to help him get his Social Security benefits and a permanent home? What does he think of the news coverage of the racist attacks on American Muslims

Chalk is one of the wittiest films at the Festival, sketching out a year of rookie teachers at Harrison. In an improvisational style that wraps a bit of reality TV around a faux documentary core, the ensemble cast will win you over with their portrayal of high school staff way out of their depth. Filmmakers Mike Akel and Chris Mass, best friends since eighth grade, drew on their own experiences as teachers — the character names are even drawn from their childhood teachers. Mass plays overconfident Mr. Stroop, determined to out-hip his way to the “Most Popular Teacher” award. Coach Webb, a stickler for rules, wonders if she’ll find romance — could it be with Mr. Lowrey, the completely inept firstyear teacher who can’t even keep track of his chalk? This is a gloriously painful exploration of the frus-

Cinematographer Style is about the

UW-Madison Division of the Arts