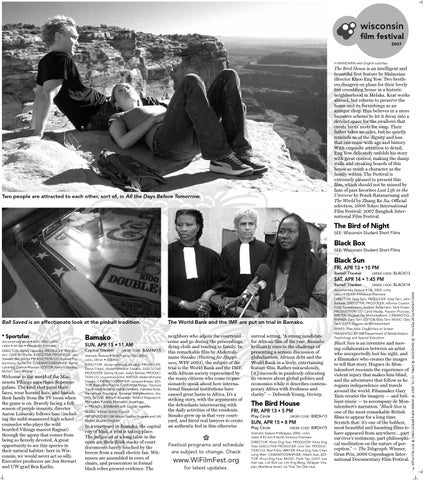 In MANDARIN with English subtitles

The Bird House is an intelligent and beautiful first feature by Malaysian director Khoo Eng Yow. Two brothers disagree on plans for their lovely but crumbling house in a historic neighborhood in Melaka. Keat works abroad, but returns to preserve the home and its furnishings as an antique shop. Hua believes in a more lucrative scheme to let it decay into a derelict space for the swallows that create birds’ nests for soup. Their father takes no sides, but he quietly reminds us of the dignity and loss that can come with age and history. With exquisite attention to detail, Eng Yow delicately unfolds his story with great control, making the damp walls and creaking boards of this house as much a character as the family within. The Festival is extremely pleased to present this film, which should not be missed by fans of past favorites Last Life in the Universe by Penek Ratanaruang and The World by Zhang Ke Jia. Official selection, 2006 Tokyo International Film Festival; 2007 Bangkok International Film Festival.

Two people are attracted to each other, sort of, in All the Days Before Tomorrow.

Welcome to the world of the Minnesota Vikings superfans. Supermegafans. The kind that paint their faces, wear horned hats, and banish their family from the TV room when the game is on. Bravely facing a full season of purple insanity, director Aaron Lubarsky follows fans (including the mild-mannered high school counselor who plays the wild bearded Vikings mascot Ragnar) through the agony that comes from being so fiercely devoted. A great opportunity to see this species in their natural habitat: here in Wisconsin, we would never act so silly. Executive producers are Jon Stewart and UW grad Ben Karlin.

The World Bank and the IMF are put on trial in Bamako.

In a courtyard in Bamako, the capital city of Mali, a trial is taking place. The judges sit at a long table in the open air, their thick stacks of court documents barely touched by the breeze from a small electric fan. Witnesses are assembled in rows of chairs, and prosecutors in formal black robes present evidence. The

neighbors who adjoin the courtyard come and go during the proceedings, dying cloth and tending to family. In this remarkable film by Abderrahmane Sissako (Waiting for Happiness, WFF 2003), the subject of the trial is the World Bank and the IMF, with African society represented by the many citizens who come to passionately speak about how international financial institutions have caused great harm to Africa. It’s a striking story, with the arguments of the defendants interweaving with the daily activities of the residents. Sissako grew up in that very courtyard, and hired real lawyers to create an authentic feel in this otherwise

surreal setting. “A strong candidate for African film of the year, Bamako brilliantly rises to the challenge of presenting a serious discussion of globalization, African debt and the World Bank in a lively, entertaining feature film. Rather miraculously, [it] succeeds in painlessly educating its viewers about global politics and economics while it describes contemporary Africa with freshness and clarity.” — Deborah Young, Variety.

Black Sun is an inventive and moving collaboration between an artist who unexpectedly lost his sight, and a filmmaker who creates the images to tell that story. Hugues de Montalembert recounts the experience of violent injury that makes him blind, and the adventures that follow as he regains independence and travels around the world. Filmmaker Gary Tarn creates the imagery — and brilliant music — to accompany de Montalembert’s narration. “Black Sun is one of the most remarkable British films to appear for a long time. Scratch that: it’s one of the boldest, most beautiful and haunting films to have appeared from anywhere.…part survivor’s testimony, part philosophical meditation on the nature of perception.” — The Telegraph. Winner, Gran Prix, 2006 Copenhagen International Documentary Film Festival.

Ball Saved is an affectionate look at the pinball tradition.