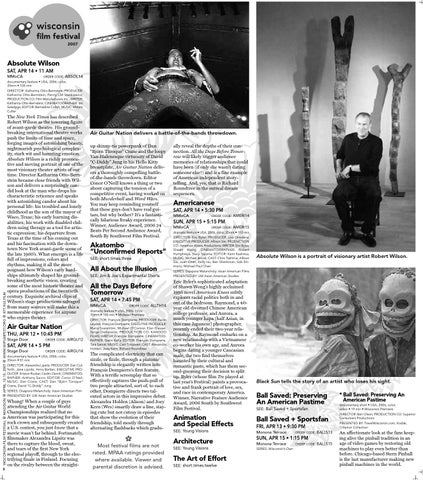 The New York Times has described Robert Wilson as the towering figure of avant-garde theatre. His groundbreaking international theatre works push the limits of time and space, forging images of astonishing beauty, nightmarish psychological complexity, stark wit and haunting emotion. Absolute Wilson is a richly provocative and moving portrait of one of the most visionary theater artists of our time. Director Katharina Otto-Bernstein became close friends with Wilson and delivers a surprisingly candid look at the man who drops his characteristic reticence and speaks with astonishing candor about his personal life: his troubled and lonely childhood as the son of the mayor of Waco, Texas; his early learning disabilities; his work with disabled children using therapy as a tool for artistic expression; his departure from Texas at the time of his coming out and his fascination with the downtown New York avant-garde scene of the late 1960’s. What emerges is a life full of impressions, colors and rhythms, making it all the more poignant how Wilson’s early hardships ultimately shaped his groundbreaking aesthetic vision, creating some of the most historic theatre and opera productions of the twentieth century. Exquisite archival clips of Wilson’s stage productions salvaged from many sources will make this a memorable experience for anyone who enjoys theater.

Whang! When a couple of guys attending the Air Guitar World Championships realized that no American was participating for this rock crown and subsequently created a U.S. contest, you just know that a movie wasn’t far behind. Fortunately, filmmaker Alexandra Lipsitz was there to capture the blood, sweat, and tears of the first New York regional playoff, through to the electrifying finale in Finland. Focusing on the rivalry between the straight-

Air Guitar Nation delivers a battle-of-the-bands throwdown. up skinny-tie powerpunk of Dan “Björn Türoque” Crane and the loopy Van-Halenesque virtuosity of David “C-Diddy” Jung in his Hello Kitty breastplate, Air Guitar Nation delivers a thoroughly compelling battleof-the-bands throwdown. Editor Conor O’Neill knows a thing or two about capturing the tension of a competitive event, having worked on both Murderball and Word Wars. You may keep reminding yourself that these guys don’t have real guitars, but why bother? It’s a fantastically hilarious freaky experience. Winner, Audience Award, 2006 24 Beats Per Second Audience Award, South By Southwest Film Festival.

All About the Illusion SEE: Jim & Joe’s Experimental Shorts

The complicated electricity that can sizzle, or fizzle, through a platonic friendship is elegantly written into François Dompierre’s first feature. With a terrific screenplay that so effectively captures the push-pull of two people attracted, sort of, to each other, Dompierre directs two talented actors in this impressive debut. Alexandra Holden (Alison) and Joey Kern (Wes) smartly draw a line, staying cute but not cutesy in episodes that show the evolution of their friendship, told mostly through alternating flashbacks which gradu-

ally reveal the depths of their connection. All the Days Before Tomorrow will likely trigger audience memories of relationships that could have been (if only she wasn’t dating someone else!) and is a fine example of American independent storytelling. And, yes, that is Richard Roundtree in the surreal dream sequences.

Eric Byler’s sophisticated adaptation of Shawn Wong’s highly acclaimed 1995 novel American Knees subtly explores racial politics both in and out of the bedroom. Raymond, a 40year old divorced Chinese American college professor, and Aurora, a much younger hapa (half Asian, in this case Japanese) photographer, recently ended their two-year relationship. As Raymond embarks on a new relationship with a Vietnamese co-worker his own age, and Aurora begins dating a younger Caucasian male, the two find themselves haunted by their cultural and romantic pasts, which has them second-guessing their decision to split up. Byler (whose film Tre played at last year’s Festival) paints a provocative and frank portrait of love, sex, and race in contemporary America. Winner, Narrative Feature Audience Award, 2006 South by Southwest Film Festival.

Absolute Wilson is a portrait of visionary artist Robert Wilson.

Black Sun tells the story of an artist who loses his sight.

The Art of Effort SEE: short.times.twelve

An affectionate look at the fans keeping alive the pinball tradition in an age of video games by restoring old machines to play even better than before. Chicago-based Stern Pinball is the last manufacturer making new pinball machines in the world.