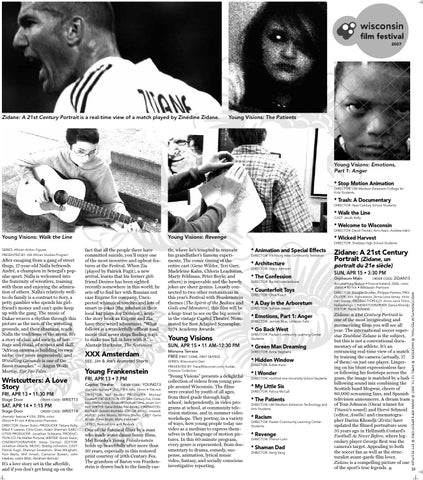 Zidane: A 21st Century Portrait is a real-time view of a match played by Zinédine Zidane.

It’s a love story set in the afterlife, and if you don’t get hung up on the

tle, where he’s tempted to recreate his grandfather’s famous experiments. The comic timing of the entire cast (Gene Wilder, Teri Garr, Madeleine Kahn, Chloris Leachman, Marty Feldman, Peter Boyle, and others) is impeccable and the bawdy jokes are sheer genius. Loosely connected to two other restorations in this year’s Festival with Frankenstein themes (The Spirit of the Beehive and Gods and Monsters), this film will be a huge treat to see on the big screen in the vintage Capitol Theater. Nominated for Best Adapted Screenplay, 1974 Academy Awards.

One of the funniest films by a man who made some damn funny films, Mel Brooks’s Young Frankenstein holds up beautifully after more than 30 years, especially in this restored print courtesy of 20th Century Fox. The grandson of Baron von Frankenstein is drawn back to the family cas-

* A Day in the Arboretum DIRECTOR: Sullivan Sweet

“Young Visions” presents a delightful collection of videos from young people around Wisconsin. The films were created by youth of all ages, from third grade through high school; independently, in video programs at school, at community television stations, and in summer video workshops. They portray, in a variety of ways, how young people today use video as a medium to express themselves in the language of motion pictures. In this 60-minute program, every genre is represented; from documentary to drama, comedy, suspense, animation, lyrical music video, fantasy, and socially conscious investigative reporting.

After escaping from a gang of street thugs, 17-year-old Nalla befriends André, a champion in Senegal’s popular sport. Nalla is welcomed into the fraternity of wrestlers, training with them and enjoying the admiration of others. Nalla’s relatively wellto-do family is a contrast to Sory, a petty gambler who spends his girlfriend’s money and can’t quite keep up with the gang. The music of Dakar weaves a rhythm through this picture as the men of the wrestling grounds, and their shamans, teach Nalla the traditions of the arena. It’s a story of class and society, of heritage and ritual, of respect and skill. “African cinema is building its own niche, ever more impressively, and Wrestling Grounds is one of the finest examples.” — Angus Wolfe Murray, Eye For Film.

fact that all the people there have committed suicide, you’ll enjoy one of the most inventive and upbeat features at the Festival. When Zia (played by Patrick Fugit), a new arrival, learns that his former girlfriend Desiree has been sighted recently somewhere in this world, he sets off to find her with Russian nut case Eugene for company. Unexpected whimsical touches and lots of smart in-jokes (the jukebox in their local bar plays Joy Division), keep the story brisk as Eugene and Zia have their weird adventures. “What follows is a wonderfully offbeat road movie that never stops finding ways to make you fall in love with it.” — Alastair Harkness, The Scotsman.

Zidane: a 21st Century Portrait is one of the most invigorating and mesmerizing films you will see all year. The international soccer superstar Zinédine Zidane is the subject, but this is not a conventional documentary of an athlete. It’s an entrancing real-time view of a match by training the camera (actually, 17 of them) on just one player. Lingering on his blunt expressionless face or following his footsteps across the grass, the image is matched by a lush billowing sound mix combining the Scottish band Mogwai, cheers of 80,000 screaming fans, and Spanish television announcers. A dream team of Tom Johnson (Oscar winner for Titanic’s sound) and Hervé Schneid (editor, Amélie) and cinematographer Darius Khondji (Evita) have updated the filmed portraiture seen 35 years ago in Hellmuth Costard’s Football As Never Before, where legendary player George Best was the camera’s target. Appealing to both the soccer fan as well as the structuralist avant-garde film lover, Zidane is a compelling picture of one of the sport’s true legends. ✿ 33