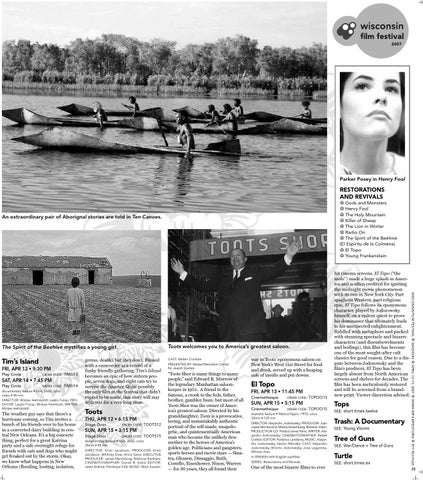 An extraordinary pair of Aborignal stories are told in Ten Canoes.

The weather guy says that there’s a hurricane coming, so Tim invites a bunch of his friends over to his home in a converted dairy building in central New Orleans. It’s a big concrete thing, perfect for a great Katrina party and a safe overnight refuge for friends with cats and dogs who might get freaked out by the storm. Okay, we know what happens in New Orleans (flooding, looting, isolation,

germs, death), but they don’t. Filmed with a camcorder as a record of a funky friendly gathering, Tim’s Island becomes an epic of how sixteen people, seven dogs, and eight cats try to survive the disaster. Quite possibly the only film in the festival that didn’t expect to be made, this story will stay with you for a very long time.

“Toots Shor is many things to many people,” said Edward R. Murrow of the legendary Manhattan saloonkeeper in 1955. A friend to the famous, a crook to the feds, father, brother, gambler, bum: but most of all Toots Shor was the owner of America’s greatest saloon. Directed by his granddaughter, Toots is a provocative, loving, and unmistakably authentic portrait of the self-made, unapologetic, and quintessentially American man who became the unlikely denmother to the heroes of America’s golden age. Politicians and gangsters, sports heroes and movie stars — Sinatra, Gleason, Dimaggio, Ruth, Costello, Eisenhower, Nixon, Warren — for 30 years, they all found their

way to Toots’ eponymous saloon on New York’s West 51st Street for food and drink, served up with a heaping side of insults and put downs.

One of the most bizarre films to ever

The Spirit of the Beehive mystifies a young girl.

hit cinema screens, El Topo (“the mole”) made a huge splash in America and is often credited for igniting the midnight movie phenomenon with its run in New York City. Part spaghetti Western, part religious epic, El Topo follows its eponymous character, played by Jodorowsky himself, on a violent quest to prove his dominance that ultimately leads to his unexpected enlightenment. Riddled with metaphors and packed with stunning spectacle and bizarre characters (and disembowelments and boilings), this film has become one of the most sought-after cult classics for good reason. Due to a dispute between Jodorowsky and the film’s producer, El Topo has been largely absent from North American screens and shelves for decades. The film has been meticulously restored and will be screened from a brandnew print. Viewer discretion advised.