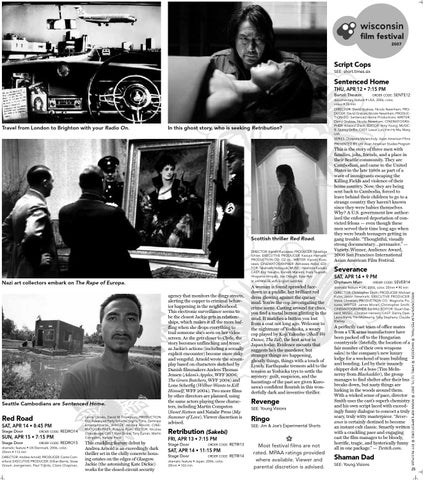 Travel from London to Brighton with your Radio On.

In this ghost story, who is seeking Retribution?

Nazi art collectors embark on The Rape of Europa.

This crackling feature debut by Andrea Arnold is an exceedingly dark thriller set in the chilly concrete housing estates on the edges of Glasgow. Jackie (the astonishing Kate Dickie) works for the closed-circuit security

A woman is found sprawled facedown in a puddle, her brilliant red dress glowing against the queasy mud. You’re the cop investigating the crime scene. Casting around for clues, you find a metal button glinting in the mud. It matches a button you lost from a coat not long ago. Welcome to the nightmare of Yoshioka, a weary cop played by Koji Yakusho (Shall We Dance, The Eel), the best actor in Japan today. Evidence mounts that suggests he’s the murderer, but stranger things are happening, ghostly things, things with a touch of Lynch. Earthquake tremors add to the tension as Yoshioka trys to settle the mystery: guilt, suspicion, and the hauntings of the past are given Kurosawa’s confident flourish in this wonderfully dark and inventive thriller.

Most festival films are not rated. MPAA ratings provided where available. Viewer and parental discretion is advised.

This is the story of three men with families, jobs, friends, and a place in their Seattle community. They are Cambodian, and came to the United States in the late 1980s as part of a wave of immigrants escaping the Killing Fields and violence of their home country. Now, they are being sent back to Cambodia, forced to leave behind their children to go to a strange country they haven’t known since they were babies themselves. Why? A U.S. government law authorized the enforced deportation of convicted felons — even though these men served their time long ago when they were brash teenagers getting in gang trouble. “Thoughtful, visually strong documentary…persuasive.” — Variety. Winner, Audience Award, 2006 San Francisco International Asian American Film Festival.

A perfectly cast team of office mates from a UK arms manufacturer have been packed off to the Hungarian countryside (fatefully, the location of a fair number of their own weapons sales) to the company’s new luxury lodge for a weekend of team building and bonding. Led by their insanely chipper dolt of a boss (Tim McInnerny from Blackadder), the group manages to find shelter after their bus breaks down, but nasty things are lurking in the woods around them. With a wicked sense of pace, director Smith uses the cast’s superb chemistry and his own script laced with exceedingly funny dialogue to concoct a truly scary, truly witty masterpiece. “Severance is certainly destined to become an instant cult classic. Smartly written with a crackling pace and engaging cast the film manages to be bloody, horrific, tragic, and hysterically funny all in one package.” — Twitch.com.

agency that monitors the dingy streets, alerting the copper to criminal behavior happening in the neighborhood. This electronic surveillance seems to be the closest Jackie gets in relationships, which makes it all the more baffling when she drops everything to trail someone she’s seen on her video screen. As she gets closer to Clyde, the story becomes unflinching and tense, as Jackie’s actions (including a sexually explicit encounter) become more risky and vengeful. Arnold wrote the screenplay based on characters sketched by Danish filmmakers Anders Thomas Jensen (Adam’s Apples, WFF 2006; The Green Butchers, WFF 2004) and Lone Scherfig (Wilbur Wants to Kill Himself, WFF 2004). Two more films by other directors are planned, using the same actors playing these characters, including Martin Compston (Sweet Sixteen and Natalie Press (My Summer of Love). Viewer discretion is advised.