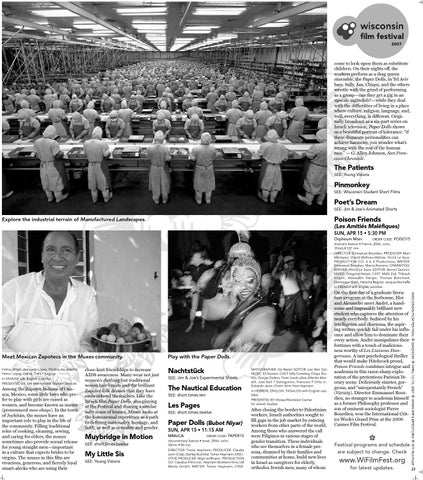 come to look upon them as substitute children. On their nights off, the workers perform as a drag queen ensemble, the Paper Dolls, in Tel Aviv bars. Sally, Jan, Chiqui, and the others wrestle with the grind of performing as a group—can they get a gig in an upscale nightclub?—while they deal with the difficulties of living in a place where culture, religion, language, and, well, everything, is different. Originally broadcast as a six-part series on Israeli television, Paper Dolls shows us a beautiful portrait of tolerance: “if these disparate personalities can achieve harmony, you wonder what’s wrong with the rest of the human race.” — G. Allen Johnson, San Francisco Chronicle.

Among the Zapotec Indians of Oaxaca, Mexico, some little boys who prefer to play with girls are raised as women, and become known as muxes (pronounced moo-shays). In the town of Juchitán, the muxes have an important role to play in the life of the community. Filling traditional roles of cooking, cleaning, sewing, and caring for elders, the muxes sometimes also provide sexual release for young straight men—important in a culture that expects brides to be virgins. The muxes in this film are vivacious, generous, and fiercely loyal smart-alecks who are using their

Play with the Paper Dolls.

close-knit friendships to increase AIDS awareness. Many wear not just women’s clothing but traditional woven hair braids and the brilliant Zapotec folk dresses that they have embroidered themselves. Like the Israeli film Paper Dolls, also playing at the Festival and sharing a similar salty sense of humor, Muxes looks at the homosexual experience as a path to defining nationality, heritage, and faith, as well as sexuality and gender.

After closing the border to Palestinian workers, Israeli authorities sought to fill gaps in the job market by enticing workers from other parts of the world. Among those who answered the call were Filipinos in various stages of gender transition. These individuals who see themselves in a female persona, shunned by their families and communities at home, build new lives in Israel as caregivers for elderly, orthodox Jewish men, many of whom

On the first day of a graduate literature program at the Sorbonne, Eloi and Alexandre meet André, a handsome and impossibly brilliant new student who captures the attention of nearly everybody. Seduced by his intelligence and charisma, the aspiring writers quickly fall under his influence and allow him to dominate their every action. André manipulates their fortunes with a touch of maliciousness worthy of Les Liaisons Dangereuses. A taut psychological thriller that would make Hitchcock proud, Poison Friends combines intrigue and academia in this razor-sharp exploration of the pretentious Parisian literary scene. Deliciously sinister, gorgeous, and “unrepentantly French” (Variety). Director Emmanuel Bourdieu, no stranger to academia himself as a former Philosophy professor and son of eminent sociologist Pierre Bourdieu, won the International Critics Week’s Grand Prize at the 2006 Cannes Film Festival.