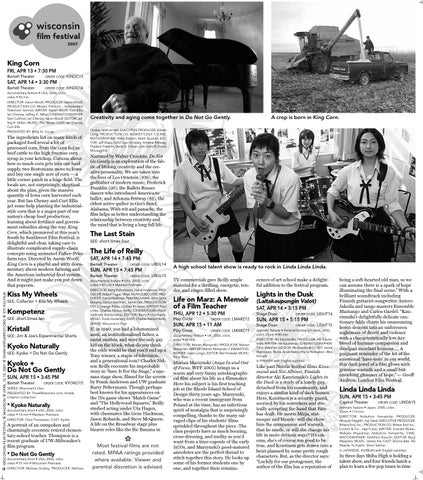 The ingredients list on many kinds of packaged food reveal a lot of processed corn, from the corn fed to beef cattle to the high fructose corn syrup in your ketchup. Curious about how so much corn gets into our food supply, two Bostonians move to Iowa and buy one single acre of corn — a little corner patch in a huge field. The locals are, not surprisingly, skeptical about the plan, given the massive quantity of Iowa corn harvested each year. But Ian Cheney and Curt Ellis get some help planting the industrialstyle corn that is a major part of our nation’s cheap food production, learning about fertilizer and government subsidies along the way. King Corn, which premiered at this year’s South by Southwest Film Festival, is delightful and clear, taking care to illustrate complicated supply-chain concepts using animated Fisher-Price farm toys. Directed by Aaron Woolf, King Corn is a playful and witty documentary about modern farming and the American industrial food system. And it might just make you put down that popcorn.

A portrait of an outspoken and charmingly eccentric retired elementary-school teacher. Thompson is a recent graduate of UW-Milwaukee’s film program.

* Do Not Go Gently

Creativity and aging come together in Do Not Go Gently.

A crop is born in King Corn.

Narrated by Walter Cronkite, Do Not Go Gently is an exploration of the fabric of lifelong creativity and the creative personality. We are taken into the lives of Leo Ornstein (109), the godfather of modern music; Frederick Franklin (90), the Ballets Russes dancer who introduced America to ballet; and Arlonzia Pettway (82), the eldest active quilter in Gee’s Bend, Alabama. With wit and panache, the film helps us better understanding the relationship between creativity and the mind that is living a long full life.

If, in 1940, you had a lobotomized aunt, an institutionalized father, a racist mother, and were the only gay kid on the block, what do you think the odds would be that you’d end up a Tony winner, a staple of television, and a generational icon? Charles Nelson Reilly recounts his improbable story in “Save It For the Stage,” a oneman stage show, filmed for the screen by Frank Anderson and UW graduate Barry Poltermann. Though perhaps best known for his appearances on the 70s game shows “Match Game” and “The Hollywood Squares,” Reilly studied acting under Uta Hagen, with classmates like Gene Hackman, Jason Robards, and Steve McQueen. A life on the Broadway stage plus bizarre roles like the Bic Banana in

cences of art school make a delightful addition to the festival program.

Marian Marzynski (Anya In and Out of Focus, WFF 2005) brings us a warm and very funny autobiographical film about his life as a filmmaker. Here his subject is his first teaching job at the Rhode Island School of Design thirty years ago. Marzynski, who was a recent immigrant from Poland at the time, has an infectious spirit of nostalgia that is surprisingly compelling, thanks to the many salvaged clips of his students’ films sprinkled throughout the piece. The class projects have as much boozing, cross-dressing, and nudity as you’d want from a time-capsule of the early 1970s, and Marzynski’s good-natured anecdotes are the perfect thread to stitch together this story. He looks up some of his former students one by one, and together their reminis-

Like past Nordic festival films Kinamand and Noi Albinoi, Finnish director Aki Kaurismaki’s Lights in the Dusk is a study of a lonely guy, detached from his community, and enjoys a similar kind of dark humor. Here, Koistinen is a security guard, scorned by his coworkers and stoically accepting the hand that Fate has dealt. He meets Mirja, statuesque and blonde: will she show him the compassion and warmth that he needs, or will she change his life in more devious ways? It’s cinema, she’s of course too good to be true, and Koistinen gets drawn into a heist planned by some pretty rough characters. But, as the director says: “Luckily for our protagonist, the author of the film has a reputation of

being a soft-hearted old man, so we can assume there is a spark of hope illuminating the final scene.” With a brilliant soundtrack including Finnish guitarist-songwriter Antero Jakoila and tango masters Ensemble Mastango and Carlos Gardel. “Kaurismäki’s delightfully delicate cautionary fable charts his unassuming hero’s descent into an unforeseen nightmare of deceit and violence with a characteristically low-key blend of humane compassion and deadpan mordant humour…. A poignant reminder of the lot of the emotional ‘have-nots’ in our world, this dark jewel of a film glows with genuine warmth and a small but enriching glimmer of hope.” — Geoff Andrew, London Film Festival.

In three days Shiba High is holding a talent show, and four friends hatch a plan to learn a few pop tunes in time