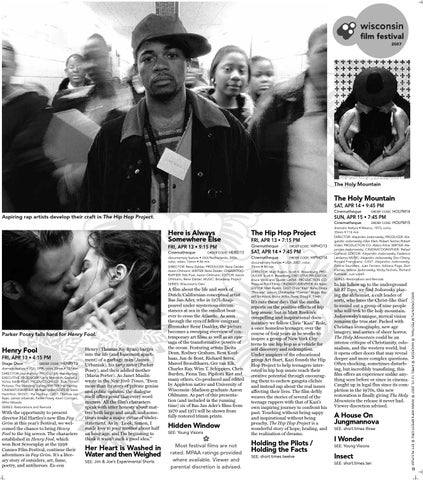 Here is Always Somewhere Else

With the opportunity to present director Hal Hartley’s new film Fay Grim at this year’s Festival, we welcomed the chance to bring Henry Fool to the big screen. The characters established in Henry Fool, which won Best Screenplay at the 1998 Cannes Film Festival, continue their adventures in Fay Grim. It’s a literary story of outsiders, art, fame, poetry, and antiheroes. Ex-con

Henry (Thomas Jay Ryan) barges into the life (and basement apartment) of a garbage man (James Urbaniak), his tarty sister (Parker Posey), and their addled mother (Maria Porter). As Janet Maslin wrote in the New York Times, “Even more than its story of private genius and public opinion, the dialogue itself offers proof that every word matters. All the film’s characters speak with utter honesty about matters both large and small, and sometimes make a major virtue of understatement. As in: ‘Look, Simon, I made love to your mother about half an hour ago, and I’m beginning to think it wasn’t such a good idea.’”

Her Heart is Washed in Water and then Weighed SEE: Jim & Joe’s Experimental Shorts

A film about the life and work of Dutch/Californian conceptual artist Bas Jan Ader, who in 1975 disappeared under mysterious circumstances at sea in the smallest boat ever to cross the Atlantic. As seen through the eyes of fellow emigrant filmmaker Rene Daalder, the picture becomes a sweeping overview of contemporary art films as well as an epic saga of the transformative powers of the ocean. Featuring artists Tacita Dean, Rodney Graham, Rem Koolhaas, Jan de Bont, Richard Serra, Marcel Broodthaers, Ger van Elk, Charles Ray, Wim T. Schippers, Chris Burden, Fiona Tan, Pipilotti Rist and many others. Co-produced and edited by Appleton native and University of Wisconsin–Madison graduate Aaron Ohlmann. As part of this presentation (and included in the running time) six of Bas Jan Ader’s films from 1970 and 1971 will be shown from fully restored 16mm prints.

It’s rare these days that the media reports on the positive effects of hip hop music, but in Matt Ruskin’s compelling and inspirational documentary we follow Chris “Kazi” Role, a once homeless teenager, over the course of four years as he works to inspire a group of New York City teens to use hip hop as a vehicle for self discovery and redemption. Under auspices of the educational group Art Start, Kazi founds the Hip Hop Project to help teenagers interested in hip hop music reach their creative potential through encouraging them to eschew gangsta clichés and instead rap about the real issues affecting their lives. The film deftly weaves the stories of several of the teenage rappers with that of Kazi’s own inspiring journey to confront his past. Touching without being sappy and inspirational without being preachy, The Hip Hop Project is a wonderful story of hope, healing, and the realization of dreams.

In his follow up to the underground hit El Topo, we find Jodorosky playing the alchemist, a cult leader of sorts, who lures the Christ-like thief to round out a group of nine people who will trek to the holy mountain. Jodorowsky’s unique, surreal vision remains the true star. Packed with Christian iconography, new age imagery, and scenes of sheer horror, The Holy Mountain could be an intense critique of Christianity, colonialism, and the western world, but it opens other doors that may reveal deeper and more complex questions. Often shocking, sometimes disturbing, but incredibly transfixing, this film offers an experience unlike anything seen before or since in cinema. Caught up in legal flux since its completion in the 1970s, this new restoration is finally giving The Holy Mountain the release it never had. Viewer discretion advised.

A House On Jungmannova SEE: short.times.three