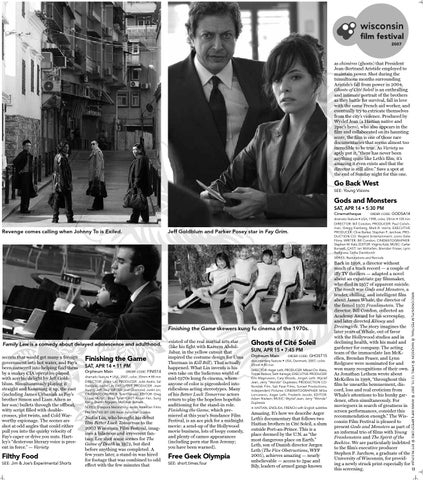 as chimères (ghosts) that President Jean-Bertrand Aristide employed to maintain power. Shot during the tumultuous months surrounding Aristide’s fall from power in 2004, Ghosts of Cité Soleil is an enthralling and intimate portrait of the brothers as they battle for survival, fall in love with the same French aid worker, and eventually try to extricate themselves from the city’s violence. Produced by Wyclef Jean (a Haitian native and 2pac’s hero), who also appears in the film and collaborated on its haunting score, the film is one of those rare documentaries that seems almost too incredible to be true. As Variety so aptly put it, “there has never been anything quite like Leth’s film; it’s amazing it even exists and that the director is still alive.” Save a spot at the end of Sunday night for this one.

Revenge comes calling when Johnny To is Exiled.

secrets that would get many a foreign government into hot water, and Fay’s been cornered into helping find them by a snakey CIA operative played with acerbic delight by Jeff Goldblum. Simultaneously playing it straight and hamming it up, the cast (including James Urbaniak as Fay’s brother Simon and Liam Aiken as her son) bullets through the offbeat, witty script filled with doublecrosses, plot twists, and Cold Warworthy espionage. The scenes are shot at odd angles that could either pull you into the quirky velocity of Fay’s caper or drive you nuts. Hartley’s “dexterous literary voice is present in force.” — Variety

Justin Lin, who brought his debut film Better Luck Tomorrow to the 2003 Wisconsin Film Festival, imagines a hilarious and irreverent fantasy. Lee shot some scenes for The Game of Death in 1972, but died before anything was completed. A few years later, a stand-in was hired for footage that was combined to odd effect with the few minutes that

existed of the real martial arts star (like his fight with Kareem AbdulJabar, in the yellow catsuit that inspired the costume design for Uma Thurman in Kill Bill). That actually happened. What Lin invents is his own take on the ludicrous world of mid-1970s kung fu cinema, where anyone of color is pigeonholed into ridiculous acting stereotypes. Many of his Better Luck Tomorrow actors return to play the hopeless hopefuls auditioning for the stand-in role. Finishing the Game, which premiered at this year’s Sundance Film Festival, is an ace pick for a midnight movie: a send-up of the Hollywood movie business, lots of loopy comedy, and plenty of cameo appearances (including porn star Ron Jeremy; you have been warned).

Amazing. It’s how we describe Asger Leth’s documentary that follows two Haitian brothers in Cité Soleil, a slum outside Port-au-Prince. This is a place deemed by the U.N. as “the most dangerous place on Earth.” Leth, son of Danish director Jørgen Leth (The Five Obstructions, WFF 2005), achieves amazing — nearly unbelievable — access to 2pac and Bily, leaders of armed gangs known

Back in 1998, a director without much of a track record — a couple of iffy TV thrillers — adapted a novel about an expatriate gay filmmaker, who died in 1957 of apparent suicide. The result was Gods and Monsters, a tender, chilling, and intelligent film about James Whale, the director of the famed 1931 Frankenstein. The director, Bill Condon, collected an Academy Award for his screenplay, and later directed Kinsey and Dreamgirls. The story imagines the later years of Whale, out of favor with the Hollywood studios and in declining health, with his maid and gardener for company. The acting team of the immaculate Ian McKellen, Brendan Fraser, and Lynn Redgrave were nominated for and won many recognitions of their own. As Jonathan Lethem wrote about McKellen in 1998, “throughout this film he unearths bemusement, discord, loss and real eroticism from Whale’s attentions to his hunky gardener, often simultaneously. For moviegoers in search of greatness in screen performances, consider this recommendation enough.” The Wisconsin Film Festival is pleased to present Gods and Monsters as part of an informal trio of films with Young Frankenstein and The Spirit of the Beehive. We are particularly indebted to the film’s executive producer Stephen P. Jarchow, a graduate of the University of Wisconsin, for providing a newly struck print especially for 13 this screening.

Finishing the Game skewers kung fu cinema of the 1970s. Family Law is a comedy about delayed adolescence and adulthood.