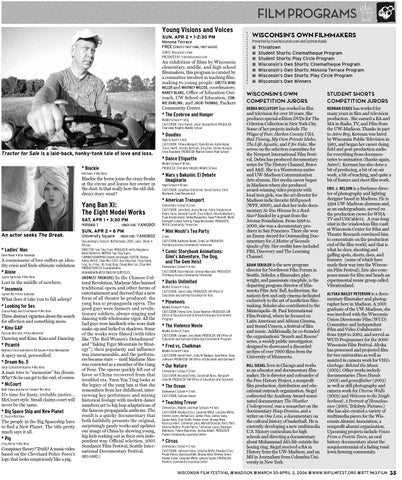 Tractor for Sale is a laid-back, honky-tonk tale of love and loss.

Blackie the horse joins the crazy freaks at the circus and leaves her owner in the dust. Is that really how the old children’s story went?

An actor seeks The Break.

(MIDWEST PREMIERE) In the Chinese Cul-

Lost in the middle of nowhere.

What does it take you to fall asleep?

Three abstract vignettes about the search for affection and something more.

Dancing and Kino. Kino and Dancing.

A man tries to “memorize” his dream. Why? So he can get to the end, of course.

The people in the Big Spaceship have to find a New Planet. The title pretty much says it all.

Conspiracy theory? Truth? A music video based on the Cleveland Police Force’s logo that looks suspiciously like a pig.

tural Revolution, Madame Mao banned traditional opera and other forms of entertainment and decreed that a new form of all theater be produced: the yang ban xi propaganda opera. The good guys were farmers and revolutionary soldiers, always singing and dancing with wholesome vigor. All the bad guys were landlords who wore dark make-up and lurked in shadows. Some of the works were filmed (with titles like “The Red Women’s Detachment” and “Taking Tiger Mountain by Strategy”), their popularity and influence was immeasurable, and the performers became stars — until Madame Mao was convicted as a member of the Gang of Four. The operas quickly fell out of favor as China recovered from that troubled era. Yuen Yan Ting looks at the legacy of the yang ban xi that she remembers from her childhood, interviewing key performers and mixing historical footage with modern dance numbers set to hip hop adaptations of the famous propaganda anthems. The result is a quirky documentary that both faithfully presents the original, surprisingly gaudy works and updates our image of China by showing young, hip kids rocking out in their own independent way. Official selection, 2005 Sundance Film Festival, Seattle International Documentary Festival. (MEG HAMEL)

WISCONSIN’S OWN FILMMAKERS Presented by travelwisconsin.com and Eastman Kodak ■ ■ ■ ■ ■ ■ ■

DEBRA MCCLUTCHY has worked in film and television for over 10 years. She produces special-edition DVDs for The Criterion Collection in New York City. Some of her projects include The Wages of Fear, Harlan County USA, Bad Timing, My Own Private Idaho, The Life Aquatic, and F for Fake. She serves on the selection committee for the Newport International Film Festival. Debra has produced documentary series for The History Channel, Bravo and A&E. She is a Wauwatosa native and UW-Madison Communication Arts alumna. Her media career began in Madison where she produced award-winning video projects with local teen girls, was the art directer for Madison indie favorite Milkpunch (WFF, 2000), and shot her indie documentary So You Wanna be a Rock Star? funded by a grant from the Jerome Foundation. From 1998 to 2000, she was a documentary producer in San Francisco. There she won an Emmy Award for Outstanding Documentary for A Matter of Seconds: Quake of 89. Her credits have included PBS, Discovery and The Learning Channel.

KERMAN ECKES has worked for

ADAM SEKULER is the new program director for Northwest Film Forum in Seattle. Sekuler, a filmmaker, playwright, and passionate cinephile, is the departing program director of Minnesota Film Arts’ Bell Auditorium, the nation’s first and only cinema dedicated exclusively to the art of nonfiction filmmaking. Sekuler also contributed to the Minneapolis–St. Paul International Film Festival, where he focused on Latin American and African Cinema, and Sound Unseen, a festival of film and music. Additionally, he co-founded the organization’s “Search and Rescue” series, a weekly public investigation designed to showcased a discarded archive of over 7000 films from the University of Minnesota.

as an educator and documentary filmmaker. He is director and cofounder of the Free History Project, a nonprofit film production, distribution and educational outreach organization. Siegel codirected the Academy Award-nominated documentary The Weather Underground, was a researcher on the documentary Hoop Dreams, and a writer on One Love, a documentary on the cultural history of basketball. He is currently developing a new multimedia U.S. History curriculum for high schools and directing a documentary about Muhammad Ali’s life outside the boxing ring. Siegel received a BA in History from the UW-Madison, and an MS in Journalism from Columbia University in New York.

many years in film and television production . She earned a BA and MA in Radio, TV, and Film from the UW-Madison. Thanks in part to Astro Boy, Kerman was hired by Wisconsin Public Television in 1982, and began her career doing field and post-production audio for everything from documentaries to animation (thanks again, Astro!). Kerman has also done a bit of producing, a bit of on-air work, a bit of teaching, and quite a bit of feature and short film work. ERIC J. NELSON is a freelance direc-

tor of photography and lighting designer based in Madison. He is 1994 UW-Madison alumnus and, as an undergraduate, served on the production crews for WHATV and CitiCable12. A year-long stint in the windowless film vault at Wisconsin Center for Film and Theatre Research convinced him to concentrate on the production end of the film world; and that is what he does, shooting and gaffing spots, shorts, docs, and features (some of which have made their way into the Wisconsin Film Festival). Eric also composes music for film and heads an experimental music group called, Vibrationland. ALYSKA BAILEY PETERSON is a docu-

mentary filmmaker and photographer here in Madison. A 2001 graduate of the UW-Madison, she was involved with the Wisconsin Union Directorate Film (WUD) Committee and Independent Film and Video Collaborative from 1998 to 2002, and served as WUD Programmer for the 2000 Wisconsin Film Festival. Alyska has processed and projected film for two universities as well as assisted in camera work for VH1’s Garbage: Behind the Music (2002). Other works include documentaries These Hands (2001) and grandfather (2002) as well as still photography and camera work for Uterine Walls (2002) and Welcome to the Neighborhood: A Portrait of Homelessness (2005, Trilobyte Pictures.) She has also created a variety of multimedia pieces for the Wisconsin Alumni Association, a nonprofit alumni organization. Upcoming projects include Voices From a Prairie Town, an oral history documentary about the sesquicentennial of a fading rural Iowa farming community.