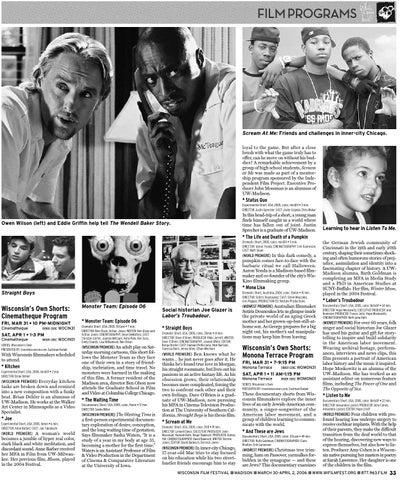 Scream At Me: Friends and challenges in inner-city Chicago. loyal to the game. But after a close brush with what the game truly has to offer, can he move on without his buddies? A remarkable achievement by a group of high school students, Scream at Me was made as part of a mentorship program sponsored by the Independent Film Project. Executive Producer John Mossman is an alumnus of UW-Madison.

In this head-trip of a short, a young man finds himself caught in a world where time has fallen out of joint. Justin Sprecher is a graduate of UW-Madison.

Learning to hear in Listen To Me.

(WORLD PREMIERE) In this dark comedy, a pumpkin comes face-to-face with the barbaric ritual we call Halloween. Aaron Yonda is a Madison-based filmmaker and co-founder of the city’s WisKino filmmaking group.

With Wisconsin filmmakers scheduled to attend.

(WISCONSIN PREMIERE) Everyday kitchen tasks are broken down and remixed into a new composition with a funky beat. Brian Dehler is an alumnus of UW-Madison. He works at the Walker Art Center in Minneapolis as a Video Specialist.

becomes a jumble of hyper real color, stark black and white meditation, and discordant sound. Anne Barber received her MFA in Film from UW-Milwaukee. Her previous film, Bloom, played in the 2004 Festival.

urday morning cartoons, this short follows the Monster Team as they face one of their own in a story of friendship, inebriation, and time travel. No monsters were harmed in the making of this film. A former resident of the Madison area, director Ben Olson now attends the Graduate School in Film and Video at Columbia College Chicago.

(WISCONSIN PREMIERE) The Waiting Time is a first-person experimental documentary exploration of desire, conception, and the long waiting time of gestation. Says filmmaker Sasha Waters, “It is a study of a year in my body at age 35, becoming a mother for the first time.” Waters is an Assistant Professor of Film &amp; Video Production in the Department of Cinema &amp; Comparative Literature at the University of Iowa.

(WORLD PREMIERE) Ben knows what he

wants… he just never goes after it. He thinks he’s found true love in Morgan, his straight roommate, but lives out his passions in an active fantasy life. As his obsession grows, their relationship becomes more complicated, forcing the two to confront each other and their own feelings. Dave O’Brien is a graduate of UW-Madison, now pursuing his MFA in Cinema-Television Production at The University of Southern California. Straight Boys is his thesis film.

Sotiris Dounoukos lets us glimpse inside the private world of an aging Greek mother and her grown-up-but-still-athome son. As George prepares for a big night out, his mother’s sad manipulations may keep him from leaving.

These documentary shorts from Wisconsin filmmakers explore the inner lives of an early Jewish-American community, a singer-songwriter of the American labor movement, and a group of children learning to communicate with the world.

(MIDWEST PREMIERE) Christmas tree trimming, ham on Passover, yarmulkes forbidden in the synagogue — and these are Jews? This documentary examines

the German Jewish community of Cincinnati in the 19th and early 20th century, shaping their sometimes shocking and often humorous stories of prejudice, assimilation and identity into a fascinating chapter of history. A UWMadison alumna, Ruth Goldman is completing an MFA in Media Study and a PhD in American Studies at SUNY-Buffalo. Her film, Winter Muse, played in the 2004 Festival.

(MIDWEST PREMIERE) For over 60 years, folk

singer and social historian Joe Glazer has used his guitar and gift for storytelling to inspire and build solidarity in the American labor movement. Weaving archival footage, performances, interviews and news clips, this film presents a portrait of American labor history and the music it inspired. Hope Moskowitz is an alumna of the UW-Madison. She has worked as an assistant editor on numerous feature films, including The Power of One and The Opposite of Sex.

(WORLD PREMIERE) Four children with profound hearing loss undergo surgery to receive cochlear implants. With the help of their parents, they make the difficult transition from the deaf world to that of the hearing, discovering new ways to express themselves, but also how to listen. Producer Amy Cohen is a Wisconsin native pursuing her masters in poetry at Sarah Lawrence. Her daughter is one of the children in the film.