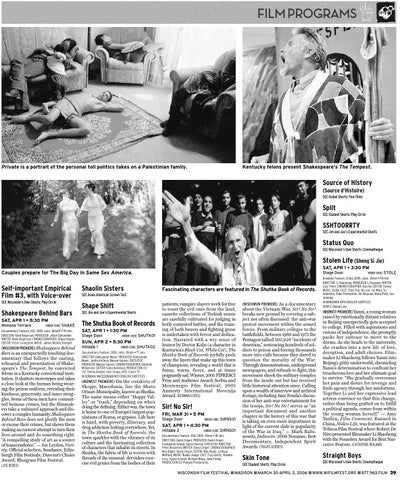 Private is a portrait of the personal toll politics takes on a Palestinian family.

Couples prepare for The Big Day in Same Sex America.

The Shutka Book of Records

Bars is an unexpectedly touching documentary that follows the casting, rehearsal and presentation of Shakespeare’s The Tempest, by convicted felons in a Kentucky correctional institution. It shatters stereotypes and takes a close look at the human being wearing the prison uniform, revealing their kindness, generosity, and inner struggles. Some of these men have committed heinous crimes, but the filmmakers take a unbiased approach and discover a complex humanity. Shakespeare Behind Bars does not glorify the men or excuse their crimes, but shows them making an earnest attempt to turn their lives around and do something right. “A compelling study of art as a source of transcendence.” — Joe Leydon, Variety. Official selection, Sundance, Edinburgh Film Festivals; Director’s Choice Award, Bluegrass Film Festival.

Fascinating characters are featured in The Shutka Book of Records.

(MIDWEST PREMIERE) On the outskirts of

Skopje, Macedonia, lies the Shuto Orizari Municipality, known as Shutka. The name means either “Happy Valley” or “trash,” depending on who’s doing the defining. Either way, the town is home to one of Europe’s largest populations of Roma, or gypsies. Life here is hard, with poverty, illiteracy, and drug addiction lurking everywhere. Yet, in The Shutka Book of Records, the town sparkles with the vibrancy of its culture and the fascinating collection of characters that inhabit its streets. In Shutka, the fabric of life is woven with threads of the unusual: dervishes exorcise evil genies from the bodies of their

patients, vampire slayers work for free to roust the evil ones from the land, cassette collections of Turkish music are carefully cultivated for judging in hotly contested battles, and the training of both boxers and fighting geese is undertaken with fervor and dedication. Narrated with a wry sense of humor by Doctor Koljo (a character in Kusturica’s Black Cat, White Cat), The Shutka Book of Records joyfully peels away the layers that make up this town of champions, revealing a world that is funny, warm, fierce, and at times poignantly sad. Winner, 2005 FIPRESCI Prize and Audience Award, Serbia and Montenegro Film Festival; 2005 Amnesty International Slovenija Award. (KERMAN ECKES)

(WISCONSIN PREMIERE) As a documentary

about the Vietnam War, Sir! No Sir! breaks new ground by covering a subject not often discussed: the anti-war protest movement within the armed forces. From military colleges to the battlefields, between 1966 and 1971 the Pentagon tallied 503,926 “incidents of desertion,” sentencing hundreds of soldiers to prison and forcing thousands more into exile because they dared to question the morality of the War. Through demonstrations, underground newspapers, and refusals to fight, this movement shook the military complex from the inside out but has received little historical attention since. Calling upon a wealth of interview and archival footage, including Jane Fonda’s discussion of her anti-war entertainment for the troops, Sir! No Sir! serves as “an important document and another chapter in the history of this war that is taking on even more importance in light of the current slide in popularity of the War in Iraq.” — Mark Rabinowitz, Indiewire. 2006 Nominee, Best Documentary, Independent Spirit Awards. (TRAVIS GERDES)

(MIDWEST PREMIERE) Yanni, a young woman raised by emotionally distant relatives in Beijing unexpectedly gets accepted to college. Filled with aspirations and visions of independence, she promptly packs her suitcase to move to the dorms. As she heads to the university, she crashes into a new life of love, deception, and adult choices. Filmmaker Li Shaohong follows Yanni into Beijing’s gritty underworld, chronicling Yanni’s determination to confront her treacherous love and her ultimate goal to survive. “She gradually overcomes her pain and desire for revenge and finds agency through her misfortune. Together Li and her expressive lead actress convince us that this change, rather than being grafted on to fulfill a political agenda, comes from within the young woman herself.” — Amy Taubin, Film Comment. Banned in China, Stolen Life, was featured at the Tribeca Film Festival where Robert De Niro presented filmmaker Li Shaohong with the Founders Award for Best Narrative Feature. (CATHERINE REILAND)