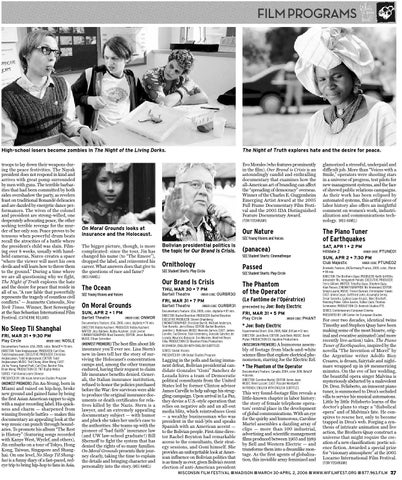 High-school losers become zombies in The Night of the Living Dorks.

The Night of Truth explores hate and the desire for peace.

troops to lay down their weapons during the peace festivities. The Nayak president does not respond in kind and arrives with great pomp surrounded by men with guns. The terrible barbarities that had been committed by both sides overshadow the party, as revelers feast on traditional Bonandé delicacies and are dazzled by energetic dance performances. The wives of the colonel and president are strong-willed, one desperately advocating peace, the other seeking terrible revenge for the murder of her only son. Peace proves to be tenuous when powerful drum beats recall the atrocities of a battle where the president’s child was slain. Filming over 8 weeks, usually with handheld cameras, Narco creates a space “where the viewer will meet his own devils and will learn how to throw them to the ground.” During a time where we are all questioning why we fight, The Night of Truth explores the hate and the desire for peace that reside in all of us. “A raw fable that powerfully represents the tragedy of countless civil conflicts.” — Jeannette Catsoulis, New York Times. Winner, Best Screenplay at the San Sebastian International Film Festival. (CATHERINE REILAND)

Evo Morales (who features prominently in the film). Our Brand is Crisis is an astoundingly candid and enthralling documentary that examines how the all-American art of branding can affect the “spreading of democracy” overseas. Winner of the Charles E. Guggenheim Emerging Artist Award at the 2005 Full Frame Documentary Film Festival and the 2005 IDA Distinguished Feature Documentary Award.

(MIDWEST PREMIERE) Jin Au-Yeung, born in Miami and raised on hip-hop, broke new ground and gained fame by being the first Asian American rapper to sign with a major recording label. His quickness and charm — sharpened from winning freestyle battles — makes this documentary an appealing look at the way music can punch through boundaries. To promote his album “The Rest is History” (featuring songs recorded with Kanye West, Wyclef, and others), Jin embarks on a tour of Tokyo, Hong Kong, Taiwan, Singapore and Shanghai. On one level, No Sleep Til Shanghai is a funny diary of a fast-paced, redeye trip to bring hip-hop to fans in Asia.

On Moral Grounds looks at insurance and the Holocaust.

The Piano Tuner of Earthquakes

The bigger picture, though, is more complicated: since the tour, Jin has changed his name (to “The Emcee”), dropped the label, and reinvented his career. What answers does that give to the questions of race and fame?

Bolivian presidential politics is the topic for Our Brand Is Crisis.

Our Brand Is Crisis

(MIDWEST PREMIERE) The best film about life insurance you’ll ever see. Lisa Stern’s new in-laws tell her the story of surviving the Holocaust’s concentration camps and, among the other traumas endured, having their request to claim life insurance benefits denied. Generali, the Italian insurance institution, refused to honor the policies purchased before the War: few survivors were able to produce the original insurance documents or death certificates for relatives killed by the Nazis. Stern is a lawyer, and an extremely appealing documentary subject — with humor and pluck she takes her uncle’s case to the authorities. She teams up with the pioneer of “bad faith” insurance law (and UW law-school graduate!) Bill Shernoff to fight the system that has denied the rights of so many families. On Moral Grounds presents their journey clearly, taking the time to explain the details and bringing character and personality into the story. (MEG HAMEL)

The Phantom of the Operator

Lagging in the polls and facing immanent defeat, Bolivian presidential candidate Gonzales “Goni” Sanchez de Lozada hires a team of Democratic political consultants from the United States led by former Clinton advisor James Carville to help salvage his struggling campaign. Upon arrival in La Paz, they devise a U.S.-style operation that relies on negative ads and an all-out media blitz, which reintroduces Goni — a wealthy businessman who was president in the mid-’90s and speaks Spanish with an American accent — to the Bolivian people. First-time director Rachel Boynton had remarkable access to the consultants, their strategy sessions, and Goni himself. She provides an unforgettable look at American influence on Bolivian politics that is as timely as ever, given Bolivia’s recent election of anti-American president

glamorized a stressful, underpaid and difficult job. More than “Voices with a Smile,” operators were shooting stars in a universe of progress, test pilots for new management systems, and the face of shrewd public relations campaigns. As their work has been eclipsed by automated systems, this artful piece of labor history also offers an insightful comment on women’s work, industrialization and communications technology. (MEG HAMEL)

This wry found-footage film reveals a little-known chapter in labor history: the story of female telephone operators’ central place in the development of global communications. With an eye for the quirky and humorous, Caroline Martel assembles a dazzling array of clips — more than 100 industrial, advertising and scientific management films produced between 1903 and 1989 by Bell and Western Electric — and transforms them into a dreamlike montage. As the first agents of globalization, this invisible army feminized and

For over two decades, identical twins Timothy and Stephen Quay have been making some of the most bizarre, original and evocative animated (and more recently live-action) tales. The Piano Tuner of Earthquakes, inspired by the novella “The Invention of Morel” by the Argentine writer Adolfo Bioy Cesares, is dream, fairytale and nightmare wrapped up in 98 mesmerizing minutes. On the eve of her wedding, the beautiful opera singer Malvina is mysteriously abducted by a malevolent Dr. Droz. Felisberto, an innocent piano tuner, is summoned to Droz’s secluded villa to service his musical automatons. Little by little Felisberto learns of the doctor’s plans to stage a ‘‘diabolical opera’’ and of Malvina’s fate. He conspires to rescue her, only to become trapped in Droz’s web. Forging a synthesis of intricate animation and live action, the Brothers Quay construct a universe that might require the creation of a new classification: poetic science fiction. Awarded a special prize for “visionary atmosphere” at the 2005 Locarno International Film Festival. (TOM YOSHIKAMI)