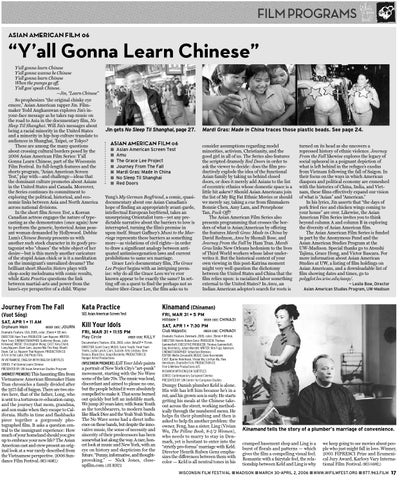 “Y’all Gonna Learn Chinese” Y’all gonna learn Chinese Y’all gonna wanna be Chinese Y’all gonna learn Chinese When the pumps go off, Y’all gon’ speak Chinese. —Jin, “Learn Chinese” So prophesizes “the original chinky eye emcee,” Asian American rapper Jin. Filmmaker Todd Angkasuwan explores Jin’s inyour-face message as he takes rap music on the road to Asia in the documentary film, No Sleep Til Shanghai. Will Jin’s messages about being a racial minority in the United States and a minority in hip-hop culture translate to audiences in Shanghai, Taipei, or Tokyo? These are among the many questions about crossing cultural borders posed by the 2006 Asian American Film Series: Y’all Gonna Learn Chinese, part of the Wisconsin Film Festival. Its full-length features and the shorts program, “Asian American Screen Test,” play with—and challenge—ideas that the dominant culture promotes about Asians in the United States and Canada. Moreover, the Series continues its commitment to exploring the political, historical, and economic links between Asia and North America across national divisions. In the short film Screen Test, a Korean Canadian actress engages the nature of typecasting as she demonstrates (once again) how to perform the generic, hysterical Asian peasant woman demanded by Hollywood. Debbie Lum’s Chinese Beauty presents us with another such stock character in its goofy protagonist who “chases” the white object of her desire—but is this merely another caricature of the stupid Asian chick or is it a meditation on the immigrant’s unrealized dreams? The brilliant short Shaolin Sisters plays with chop-socky melodrama with comic results, while Kata Practice questions the link between martial-arts and power from the knee’s-eye perspective of a child. Wayne

Jin gets No Sleep Til Shanghai, page 27.

Yung’s My German Boyfriend, a comic, quasidocumentary about one Asian Canadian’s hope of finding an appropriately avant-garde, intellectual European boyfriend, takes an unsurprising Orientalist turn—yet any predictable narrative about the barriers to love is interrupted, turning the film’s premise in upon itself. Stuart Gaffney’s Muni to the Marriage represents these barriers as something more—as violations of civil rights—in order to draw a significant analogy between antiquated antimiscegenation laws and current prohibitions to same sex marriage. Grace Lee’s documentary film, The Grace Lee Project begins with an intriguing premise: why do all the Grace Lees we’ve ever known appear to be exactly the same? In setting off on a quest to find the perhaps not so elusive über-Grace Lee, the film asks us to

Mardi Gras: Made in China traces those plastic beads. See page 24. consider assumptions regarding model minorities, activism, Christianity, and the good girl in all of us. The Series also features the scripted dramedy Red Doors in order to ask the viewer to decide: does the film productively explode the idea of the functional Asian family by taking us behind closed doors, or does it merely add Asians to the list of eccentric ethnics whose domestic space is a little bit askew? Should Asian Americans join the list of My Big Fat Ethnic Movies or should we merely say, taking a cue from filmmakers Bonnie Chen, Amy Lam, and Persephone Tan, Fuck Off? The Asian American Film Series also presents programming that crosses the borders of what is Asian/American by offering the features Mardi Gras: Made in China by David Redmon, Amu by Shonali Bose, and Journey From the Fall by Ham Tran. Mardi Gras links New Orleans hedonism to the lives of Third World workers whose labor underwrites it. But the historical context of your own viewing in this post-Katrina moment might very well question the dichotomy between the United States and China that the film relies upon: is racialized labor something external to the United States? In Amu, an Indian American adoptee’s search for roots is

Journey From The Fall

(MIDWEST PREMIERE) This haunting film from

Vietnamese American filmmaker Ham Tran chronicles a family divided after the 1975 fall of Saigon. There are two stories here, that of the father, Long, who is sent to a torturous re-education camp, and the journey that mom, grandma, and son make when they escape to California. Shifts in time and flashbacks piece together a gorgeously photographed film. It asks a question central to the immigrant experience: How much of your homeland should you give up to embrace your new life? The Asian American cast and crew present an original look at a war rarely described from the Vietnamese perspective. 2006 Sundance Film Festival. (MEG HAMEL)

turned on its head as she uncovers a repressed history of ethnic violence. Journey From the Fall likewise explores the legacy of social upheaval in a poignant depiction of what is left behind in the refugee’s exodus from Vietnam following the fall of Saigon. In their focus on the ways in which American diaspora and political economy are enmeshed with the histories of China, India, and Vietnam, these films effectively expand our vision of what is “Asian” and “American.” In his lyrics, Jin asserts that “the days of pork fried rice and chicken wings coming to your house” are over. Likewise, the Asian American Film Series invites you to think beyond column A and column B in exploring the diversity of Asian American film. The Asian American Film Series is funded in part by the Anonymous Fund and the Asian American Studies Program at the UW-Madison. Special thanks go to Atsushi Tajima, Grace Hong, and Victor Bascara. For more information about Asian American Studies at UW, a listing of film holdings on Asian Americans, and a downloadable list of film showing dates and times, go to polyglot.lss.wisc.edu/aasp/. — Leslie Bow, Director Asian American Studies Program, UW-Madison

a portrait of New York City’s “art-punk” movement, starting with the No Wave scene of the late 70s. The music was loud, discordant and aimed to please no one, but the people behind it were absolutely compelled to make it. That scene burned out quickly but left an indelible mark. We jump 20 years later, with Sonic Youth as the torchbearers, to modern bands like Black Dice and the Yeah Yeah Yeahs. The No Wave scene had a direct influence on these bands, but despite the innovative music, the sense of necessity and sincerity of their predecessors has been somewhat lost along the way. A rare, honest look at music and New York, with an eye on history and skepticism for the future. “Funny, informative, and thoughtprovoking.” — Nick Jones, closeupfilm.com. (JOE BERES)

Dumpy Danish plumber Keld is alone. His wife has left him because he’s in a rut, and his grown son is surly. He starts getting his meals at the Chinese takeout across the street, working methodically through the numbered menu. He helps fix their plumbing and then is asked to help fix another problem: the owner, Feng, has a sister, Ling (Vivian Wu, The Pillow Book, 8-1/2 Women), who needs to marry to stay in Denmark, yet is hesitant to enter into the “strictly pro-forma” marriage with Keld. Director Henrik Ruben Genz emphasizes the differences between them with color — Keld is all neutral tones in his

Kinamand tells the story of a plumber’s marriage of convenience. cramped basement shop and Ling is a burst of florals and patterns — which gives the film a compelling visual feel. Romantic with a fairytale feel, the relationship between Keld and Ling is why

UW-Madison Division of the Arts