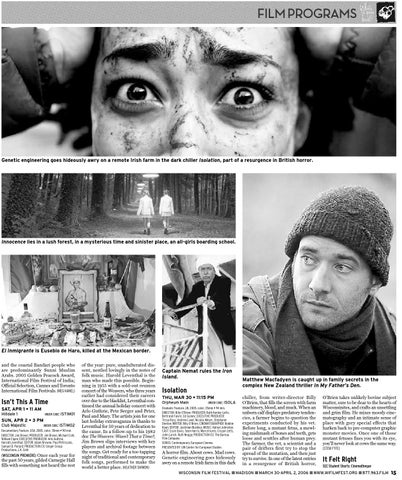 Genetic engineering goes hideously awry on a remote Irish farm in the dark chiller Isolation, part of a resurgence in British horror.

Innocence lies in a lush forest, in a mysterious time and sinister place, an all-girls boarding school.

(WISCONSIN PREMIERE) Once each year for

the past 50 years, gilded Carnegie Hall fills with something not heard the rest

of the year: pure, unadulterated dissent, nestled lovingly in the notes of folk music. Harold Leventhal is the man who made this possible. Beginning in 1955 with a sold-out reunion concert of the Weavers, who three years earlier had considered their careers over due to the blacklist, Leventhal continued the annual holiday concert with Arlo Guthrie, Pete Seeger and Peter, Paul and Mary. The artists join for one last holiday extravaganza in thanks to Leventhal for 50 years of dedication to the cause. In a follow-up to his 1982 doc The Weavers: Wasn’t That a Time?, Jim Brown slips interviews with key players and archival footage between the songs. Get ready for a toe-tapping night of traditional and contemporary folk songs, performed to make the world a better place. (HEATHER SHIMON)

A horror film. About cows. Mad cows. Genetic engineering goes hideously awry on a remote Irish farm in this dark

Matthew Macfadyen is caught up in family secrets in the complex New Zealand thriller In My Father’s Den. chiller, from writer-director Billy O’Brien, that fills the screen with farm machinery, blood, and muck. When an unborn calf displays predatory tendencies, a farmer begins to question the experiments conducted by his vet. Before long, a mutant fetus, a mewling mishmash of bones and teeth, gets loose and scuttles after human prey. The farmer, the vet, a scientist and a pair of drifters first try to stop the spread of the mutation, and then just try to survive. In one of the latest entries in a resurgence of British horror,

O’Brien takes unlikely bovine subject matter, sure to be dear to the hearts of Wisconsinites, and crafts an unsettling and grim film. He mixes moody cinematography and an intimate sense of place with gory special effects that harken back to pre-computer graphic monster movies. Once one of those mutant fetuses fixes you with its eye, you’ll never look at cows the same way. (STEW FYFE)