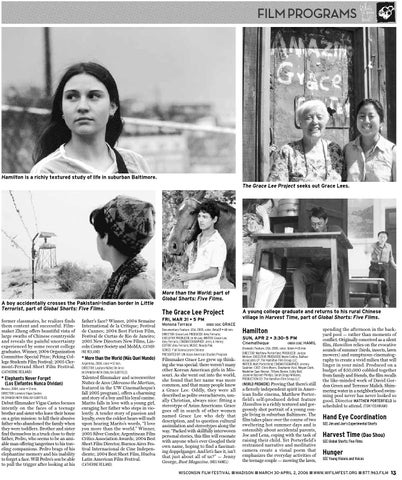 Hamilton is a richly textured study of life in suburban Baltimore. The Grace Lee Project seeks out Grace Lees.

Debut filmmaker Vigas Castes focuses intently on the faces of a teenage brother and sister who leave their house on a grim mission: to kill their abusive father who abandoned the family when they were toddlers. Brother and sister find themselves in a truck close to their father, Pedro, who seems to be an amiable man offering tangerines to his traveling companions. Pedro brags of his elephantine memory and his inability to forget a face. Will Pedro’s son be able to pull the trigger after looking at his

More than the World: part of Global Shorts: Five Films.

A young college graduate and returns to his rural Chinese village in Harvest Time, part of Global Shorts: Five Films.

Filmmaker Grace Lee grew up thinking she was special: there weren’t many other Korean American girls in Missouri. As she went out into the world, she found that her name was more common, and that many people knew a Grace Lee. Oddly, they were all described as polite overachievers, usually Christian, always nice: fitting a stereotype of Asian Americans. Grace goes off in search of other women named Grace Lee who defy that description, and to question cultural assimilation and stereotypes along the way. “Packed with skillfully interwoven personal stories, this film will resonate with anyone who’s ever Googled their own name, hoping to find a fascinating doppelganger. And let’s face it, isn’t that just about all of us?” — Jenny George, Bust Magazine. (MEG HAMEL)

(WORLD PREMIERE) Proving that there’s still a fiercely independent spirit in American Indie cinema, Matthew Porterfield’s self-produced debut feature Hamilton is a richly textured and gorgeously shot portrait of a young couple living in suburban Baltimore. The film takes place over the course of two sweltering hot summer days and is ostensibly about accidental parents, Joe and Lena, coping with the task of raising their child. Yet Porterfield’s restrained narrative and meditative camera create a visual poem that emphasizes the everyday activities of the teenage couple — mowing the lawn,

spending the afternoon in the backyard pool — rather than moments of conflict. Originally conceived as a silent film, Hamilton relies on the evocative sounds of summer (birds, insects, lawn mowers) and sumptuous cinematography to create a vivid milieu that will linger in your mind. Produced on a budget of $50,000 cobbled together from family and friends, the film recalls the like-minded work of David Gordon Green and Terrence Malick. Shimmering water in a neighborhood swimming pool never has never looked so good. Director MATTHEW PORTERFIELD is scheduled to attend. (TOM YOSHIKAMI)