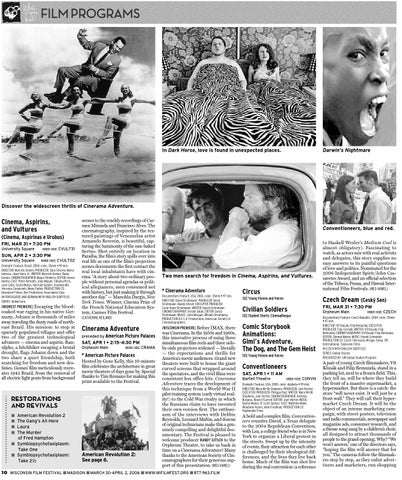 In Dark Horse, love is found in unexpected places.

soaked war raging in his native Germany, Johann is thousands of miles away traveling the dusty roads of northeast Brazil. His mission: to stop at sparsely populated villages and offer two of the greatest technological advances — cinema and aspirin. Ranulpho, a hitchhiker escaping a brutal drought, flags Johann down and the two share a quiet friendship, both searching for freedom and new destinies. Gomes’ film meticulously recreates 1942 Brazil, from the removal of all electric light posts from background

scenes to the crackly recordings of Carmen Miranda and Francisco Alves. The cinematography, inspired by the textured paintings of Venezuelan artist Armando Reverón, is beautiful, capturing the luminosity of the sun-baked Sertao. Shot entirely on location in Paraíba, the film’s story spills over into real life as one of the film’s projection scenes documents the first contact the real local inhabitants have with cinema. “A story about two ordinary people without personal agendas or political allegiances, men consumed not with history, but just making it through another day.” — Manohla Dargis, New York Times. Winner, Cinema Prize of the French National Education System, Cannes Film Festival. (CATHERINE REILAND)

* American Picture Palaces Hosted by Gene Kelly, this 10-minute film celebrates the architecture in great movie theaters of days gone by. Special thanks to Tim Romano for making this print available to the Festival.

(WISCONSIN PREMIERE) Before IMAX, there was Cinerama. In the 1950s and 1960s, this innovative process of using three simultaneous film reels and three sideby-side projectors widened — literally — the expectations and thrills for America’s movie audiences. Grand new theaters were built to house the giant curved screens that wrapped around the spectators, and the vivid films were consistent box office hits. Cinerama Adventure traces the development of this technique from a World War II pilot training system (early virtual reality!) to the Cold War rivalry in which the Russians claim to have invented their own version first. The enthusiasm of the interviews with Debbie Reynolds, Leonard Maltin, and dozens of original technicians make this a genuinely compelling and delightful documentary. The Festival is pleased to welcome producer RANDY GITSCH to the Orpheum Theatre, to take us back in time on a Cinerama Adventure! Many thanks to the American Society of Cinematographers for their generous support of this presentation. (MEG HAMEL)

to Haskell Wexler’s Medium Cool is almost obligatory). Fascinating to watch, as actors mix with real activists and delegates, this story supplies no easy answers to its painful questions of love and politics. Nominated for the 2006 Independent Spirit/John Cassavetes Award, and an official selection of the Tribeca, Pusan, and Hawaii International Film Festivals. (MEG HAMEL)

A bold and complex film, Conventioneers reunites David, a Texas delegate to the 2004 Republican Convention, with Lea, a college friend who is in New York to organize a Liberal protest in the streets. Swept up by the intensity of events, their attraction for each other is challenged by their ideological differences, and the lives they live back home. Much of the film was shot live during the real convention (a reference

A pair of young Czech filmmakers, Vít Klusák and Filip Remunda, stand in a parking lot, next to a frozen field. This, they tell us, will be where they build the front of a massive supermarket, a hypermarket. But there is a catch: the store “will never exist. It will just be a front wall.” They will call their hypermarket Czech Dream. It will be the object of an intense marketing campaign, with street posters, television and radio commercials, newspaper and magazine ads, consumer research, and a theme song sung by a children’s choir, all designed to attract thousands of people to the grand opening. Why? “We won’t answer,” one of the directors says, “hoping the film will answer that for you.” The cameras follow the filmmakers step by step, as they enlist advertisers and marketers, run shopping