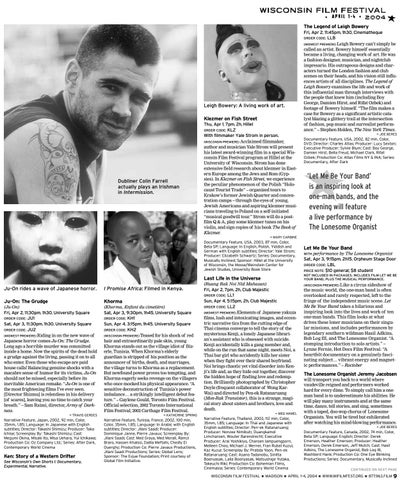 The Legend of Leigh Bowery

Thu, Apr 1, 7pm, 2h, Hillel ORDER CODE: KLZ With filmmaker Yale Strom in person. (WISCONSIN PREMIERE) Acclaimed filmmaker, author and musician Yale Strom will present his latest award-winning film in a special Wisconsin Film Festival program at Hillel at the University of Wisconsin. Strom has done extensive field research about klezmer in Eastern Europe among the Jews and Rom (Gypsies). In Klezmer on Fish Street, we experience the peculiar phenomenon of the Polish “Holocaust Tourist Trade” – organized tours to Krakow’s former Jewish Quarter and concentration camps – through the eyes of young, Jewish Americans and aspiring klezmer musicians traveling to Poland on a self-initiated “musical goodwill tour.” Strom will do a postfilm Q & A, play some klezmer tunes on his violin, and sign copies of his book The Book of Klezmer.

Fri, Apr 2, 11:45pm, 1h30, Cinematheque ORDER CODE: LLB (MIDWEST PREMIERE) Leigh Bowery can’t simply be called an artist. Bowery himself essentially became a living, changing work of art. He was a fashion designer, musician, and nightclub impresario. His outrageous designs and characters turned the London fashion and club scenes on their heads, and his vision still influences artists of all disciplines. The Legend of Leigh Bowery examines the life and work of this influential man through interviews with the people that knew him (including Boy George, Damien Hirst, and Rifat Ozbek) and footage of Bowery himself. “The film makes a case for Bowery as a significant artistic catalyst blazing a glittery trail at the intersection of fashion, pop music and surrealist performance.” – Stephen Holden, The New York Times. — JOE BERES

‘Let Me Be Your Band’ is an inspiring look at one-man bands, and the evening will feature a live performance by The Lonesome Organist

I Promise Africa: Filmed in Kenya.

Fri, Apr 2, 11:30pm, 1h30, University Square ORDER CODE: JU1 Sat, Apr 3, 11:30pm, 1h30, University Square ORDER CODE: JU2 (MIDWEST PREMIERE) Riding in on the new wave of Japanese horror comes Ju-On: The Grudge. Long ago a horrible murder was committed inside a home. Now the spirits of the dead hold a grudge against the living, passing it on to all who enter. Even those who escape are paid house calls! Balancing genuine shocks with a macabre sense of humor for its victims, Ju-On should not be missed, especially before its inevitable American remake. “Ju-On is one of the most frightening films I’ve ever seen. [Director Shizmu] is relentless in his delivery [of scares], leaving you no time to catch your breath.” – Sam Raimi, director, Army of Darkness.

by The Lonesome Organist

Last Life in the Universe Ju-On rides a wave of Japanese horror.

Let Me Be Your Band

Fri, Apr 2, 7pm, 2h, Club Majestic ORDER CODE: LL1 Sun, Apr 4, 5:15pm, 2h, Club Majestic ORDER CODE: LL2 (MIDWEST PREMIERE) Elements of Japanese yakuza films, lush and intoxicating images, and eccentric narrative tics from the cutting edge of Thai cinema converge to tell the story of the mysterious Kenji, a lonely Japanese librarian’s assistant who is obsessed with suicide. Kenji accidentally kills a gang member and, while on the run that same night, meets Noi, a Thai bar girl who accidently kills her sister when they fight over their shared boyfriend. Noi brings chaotic yet vital disorder into Kenji’s life and, as they hide out together, discover the hidden hope of finding love and redemption. Brilliantly photographed by Christopher Doyle (frequent collaborator of Wong KarWai) and directed by Pen-ek Ratanaruang (Mon-Rak Transistor), this is a strange, magical story about sisters and brothers, love and death. — MEG HAMEL

(WISCONSIN PREMIERE) Like a circus sideshow of the music world, the one-man band is often overlooked and rarely respected, left to the fringe of the independent music scene. Let Me Be Your Band takes a hilarious and inspiring look into the lives and work of ten one-man bands. This film looks at what drives these loner musicians on their singular missions, and includes performances by legendary southern wildman Hasil Adkins, Bob Log III, and The Lonesome Organist. “A stomping introduction to solo artists.” – Lynne Fernie, Hot Docs Film Festival. “A heartfelt documentary on a genuinely fascinating subject… vibrant energy and magnetic performances.” – Roctober

The Lonesome Organist Jeremy Jacobsen will transport you back to a world where vaudeville reigned and performers worked hard for every dime. To simply call him a oneman band is to underestimate his abilities. He will play many instruments and at the same time, dance, tell stories, and sing, sometimes with a taped, doo-wop chorus of Lonesome Organists. You will be tired but exhilerated after watching his mind-blowing performance. — JOE BERES