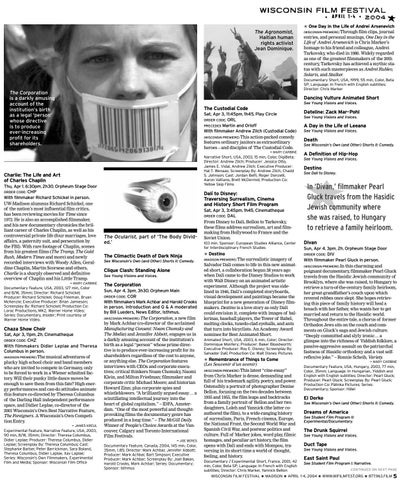 ★ One Day in the Life of Andrei Arsenevich

(WISCONSIN PREMIERE) Through film clips, journal entries, and personal musings, One Day in the Life of Andrei Arsenevich is Chris Marker’s homage to his friend and colleague, Andrei Tarkovsky, who died in 1986. Widely regarded as one of the greatest filmmakers of the 20th century, Tarkovsky has achieved a mythic status with such masterpieces as Andrei Rublev, Solaris, and Stalker.

The Corporation is a darkly amusing account of the institution’s birth as a legal ‘person’ whose directive is to produce ever-increasing profit for its shareholders.

Charlie: The Life and Art of Charles Chaplin Thu, Apr 1, 6:30pm, 2h30, Orpheum Stage Door ORDER CODE: CHP With filmmaker Richard Schickel in person. UW-Madison alumnus Richard Schickel, one of the nation’s most influential film critics, has been reviewing movies for Time since 1972. He is also an accomplished filmmaker, and his new documentary chronicles the brilliant career of Charles Chaplin, as well as his controversial private life (four marriages, love affairs, a paternity suit, and persecution by the FBI). With rare footage of Chaplin, scenes from his greatest films (The Tramp, The Gold Rush, Modern Times and more) and newly recorded interviews with Woody Allen, Geraldine Chaplin, Martin Scorsese and others, Charlie is a sharply observed and definitive overview of Chaplin and his Little Tramp. — MARY CARBINE

Chaza Show Choir Sat, Apr 3, 11pm, 2h, Cinematheque ORDER CODE: CHZ With filmmakers Didier Leplae and Theresa Columbus in person. (MADISON PREMIERE) The musical adventures of plucky high school choir and band members who are invited to compete in Germany, only to be forced to work in a Wiener schnitzel factory. Will their punky little dance moves be enough to save them from this fate? High energy performances and can-do attitudes animate this feature co-directed by Theresa Columbus of the Darling Hall independent performance space, and Didier Leplae, co-director of the 2001 Wisconsin’s Own Best Narrative Feature, The Foreigners. A Wisconsin’s Own Competition Entry. — JAMES KREUL

The Ocularist, part of ‘The Body Divided.’ The Climactic Death of Dark Ninja See Wisconsin’s Own (and Other) Shorts II: Comedy.

The Corporation Sun, Apr 4, 3pm, 3h30, Orpheum Main ORDER CODE: COR With filmmakers Mark Achbar and Harold Crooks in person. Introduction and Q & A moderated by Bill Lueders, News Editor, Isthmus. (WISCONSIN PREMIERE) The Corporation, a new film by Mark Achbar (co-director of the acclaimed Manufacturing Consent: Noam Chomsky and The Media) and Jennifer Abbott, engages us in a darkly amusing account of the institution’s birth as a legal “person” whose prime directive is to produce ever-increasing profit for its shareholders regardless of the cost to anyone, or anything else. The Corporation features interviews with CEOs and corporate executives; critical thinkers Noam Chomsky, Naomi Klein, and Milton Friedman; filmmaker and corporate critic Michael Moore; and historian Howard Zinn; plus corporate spies and whistleblowers. “A brilliantly argued essay… a scintillating intellectual journey into the heart of global capitalism.” – IDFA, Amsterdam. “One of the most powerful and thoughtprovoking films the documentary genre has produced in a long time.” – The McGill Daily. Winner of People’s Choice Awards at the Vancouver, Calgary and Toronto International Film Festivals. — JOE BERES

★ Destino (MADISON PREMIERE) The surrealistic imagery of Salvador Dalí comes to life in this new animated short, a collaboration begun 58 years ago when Dalí came to the Disney Studios to work with Walt Disney on an animated artistic experiment. Although the project was sidelined in 1946, Dalí’s completed storyboards, visual development and paintings became the blueprint for a new generation of Disney filmmakers. Destino is a love story as only Dalí could envision it, complete with images of ballerinas, baseball players, the Tower of Babel, melting clocks, tuxedo-clad eyeballs, and ants that turn into bicyclists. An Academy Award nominee for Best Animated Short.

★ Remembrance of Things to Come (Les Souvenir d’un avenir) (WISCONSIN PREMIERE) This latest “cine-essay” from Chris Marker is dense, demanding and full of his trademark agility, poetry, and power. Ostensibly a portrait of photographer Denise Bellon, focusing on the two decades between 1935 and 1955, the film leaps and backtracks from a family portrait of Bellon and her two daughters, Loleh and Yannick (the latter coauthored the film), to a wide-ranging history of surrealism, Paris, French cinema, Europe, the National Front, the Second World War and Spanish Civil War, and postwar politics and culture. Full of Marker jokes, word play, filmic homages, and peculiar art history, the film opens with Dalí and ends with Mompou, traversing in its short time a world of thought, feeling, and history.

A Day in the Life of Leeana See Young Visions and Voices.

Death See Wisconsin’s Own (and Other) Shorts II: Comedy.

A Definition of Hip-Hop See Young Visions and Voices.

El Dorko See Wisconsin’s Own (and Other) Shorts II: Comedy.