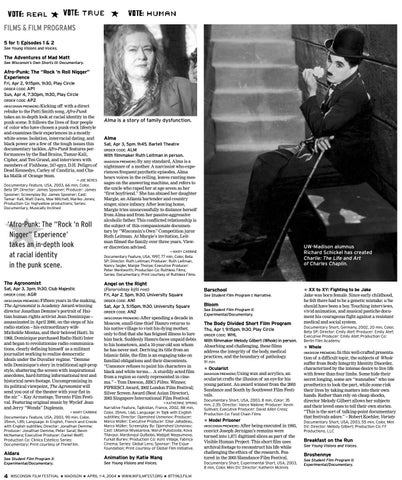 Alma is a story of family dysfunction.

Alma Sat, Apr 3, 5pm, 1h45, Bartell Theatre ORDER CODE: ALM With filmmaker Ruth Leitman in person. (MADISON PREMIERE) By any standard, Alma is a nightmare of a mother. A narcissist who experiences frequent psychotic episodes, Alma hears voices in the ceiling, leaves ranting messages on the answering machine, and refers to the uncle who raped her at age seven as her “first boyfriend.” She has abused her daughter Margie, an Atlanta bartender and country singer, since infancy. After leaving home, Margie tries unsuccessfully to distance herself from Alma and from her passive-aggressive alcoholic father. This conflicted relationship is the subject of this compassionate documentary by “Wisconsin’s Own” Competition juror Ruth Leitman. At Margie’s invitation, Leitman filmed the family over three years. Viewer discretion advised.

Angel on the Right

★ XX to XY: Fighting to be Jake

Fri, Apr 2, 5pm, 1h30, University Square ORDER CODE: AN1 Sat, Apr 3, 5:15pm, 1h30, University Square ORDER CODE: AN2 (WISCONSIN PREMIERE) After spending a decade in Moscow, small-time thief Hamro returns to his native village to visit his dying mother, only to find that she has feigned illness to lure him back. Suddenly Hamro faces unpaid debts to his hometown, and a 10-year-old son whom he has never met. Deriving its title from an Islamic fable, the film is an engaging take on familial obligations and their discontents. “Usmonov refuses to paint his characters in black and white terms… A sturdily acted film from a region so rarely represented in cinema.” – Tom Dawson, BBCi Films. Winner, FIPRESCI Award, 2002 London Film Festival; Silver Screen Award (Best Asian Director), 2003 Singapore International Film Festival.

Jake was born female. Since early childhood, he felt there had to be a genetic mistake: s/he should have been a boy. Touching interviews, vivid animation, and musical pastiche document his courageous fight against a resistant medical and social system.

★ Ocularist (MADISON PREMIERE) Using wax and acrylics, an ocularist crafts the illusion of an eye for his young patient. An award winner from the 2003 Sundance and South by Southwest Film Festivals.

★ Model Prisoner (WISCONSIN PREMIERE) After being executed in 1993,

★ Whole (MADISON PREMIERE) In this well-crafted presentation of a difficult topic, the subjects of Whole suffer from Body Integrity Identity Disorder, characterized by the intense desire to live life with fewer than four limbs. Some hide their secret longing, some are “wannabes” who use prosthetics to look the part, while some risk their lives by taking matters into their own hands. Rather than rely on cheap shocks, director Melody Gilbert allows her subjects and their loved ones to tell their own stories. “This is the sort of talking-point documentary that festivals adore.” – Robert Koehler, Variety

Breakfast on the Run See Young Visions and Voices.