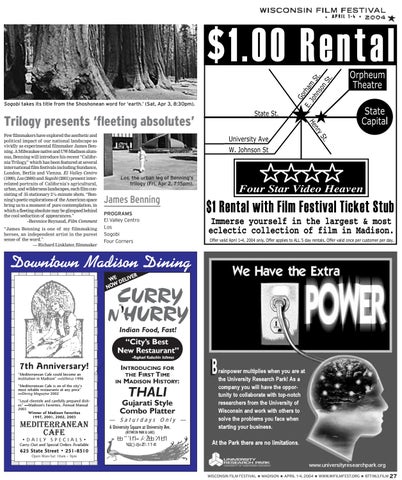 Trilogy presents ‘fleeting absolutes’ Few filmmakers have explored the aesthetic and political impact of our national landscape as vividly as experimental filmmaker James Benning. A Milwaukee native and UW-Madison alumnus, Benning will introduce his recent “California Trilogy,” which has been featured at several international film festivals including Sundance, London, Berlin and Vienna. El Valley Centro (1999), Los (2000) and Sogobi (2001) present interrelated portraits of California’s agricultural, urban, and wilderness landscapes, each film consisting of 35 stationary 2½-minute shots. “Benning’s poetic explorations of the American space bring us to a moment of pure contemplation, in which a fleeting absolute may be glimpsed behind the cool seduction of appearances.” –Berenice Reynaud, Film Comment “James Benning is one of my filmmaking heroes, an independent artist in the purest sense of the word.” — Richard Linklater, filmmaker

7th Anniversary! “Mediterranean Cafe could become an institution in Madison” —Isthmus 1996 “Mediterranean Cafe is on of the city’s most reliable restaurants at any price” —Dining Magazine 2002 “Loyal clientele and carefully prepared dishes” —Madison's Favorites, Annual Manual 2003 Winner of Madison Favorites 1997, 2001, 2002, 2003

INTRODUCING FOR THE FIRST TIME IN MADISON HISTORY:

rainpower multiplies when you are at the University Research Park! As a company you will have the opportunity to collaborate with top-notch researchers from the University of Wisconsin and work with others to solve the problems you face when starting your business.

At the Park there are no limitations.