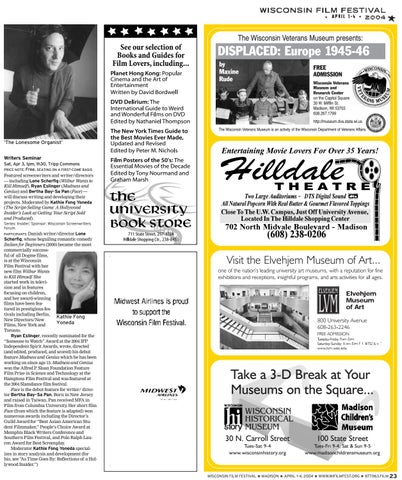 Scherfig, whose beguiling romantic comedy Italian for Beginners (2000) became the most commercially successful of all Dogme films, is at the Wisconsin Film Festival with her new film Wilbur Wants to Kill Himself. She started work in television and in features focusing on children, and her award-winning films have been featured in prestigious festivals including Berlin, Kathie Fong New Directors/New Yoneda Films, New York and Toronto. Ryan Eslinger, recently nominated for the “Someone to Watch” Award at the 2004 IFP Independent Spirit Awards, wrote, directed (and edited, produced, and scored) his debut feature Madness and Genius which he has been working on since age 13. Madness and Genius won the Alfred P. Sloan Foundation Feature Film Prize in Science and Technology at the Hamptons Film Festival and was featured at the 2004 Slamdance film festival. Face is the debut feature for writer/ director Bertha Bay-Sa Pan. Born in New Jersey and raised in Taiwan, Pan received MFA in Film from Columbia University. Her short film Face (from which the feature is adapted) won numerous awards including the Director’s Guild Award for “Best Asian American Student Filmmaker,” People’s Choice Award at Memphis Black Writers Conference and Southern Film Festival, and Polo Ralph Lauren Award for Best Screenplay. Moderator Kathie Fong Yoneda specializes in story analysis and development (for bio, see “As Time Goes By: Reflections of a Hollywood Insider.”)

Visit the Elvehjem Museum of Art... one of the nation’s leading university art museums, with a reputation for fine exhibitions and receptions, insightful programs, and arts activities for all ages.

Take a 3-D Break at Your Museums on the Square... WISCONSIN HISTORICAL MUSEUM 30 N. Carroll Street