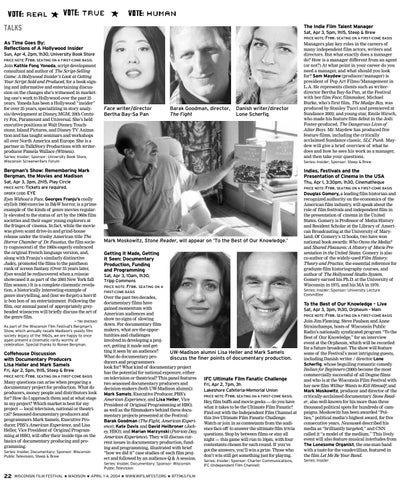 TALKS As Time Goes By: Reflections of A Hollywood Insider Sun, Apr 4, 2pm, 1h30, University Book Store PRICE NOTE: Free. SEATING ON A FIRST-COME BASIS. Join Kathie Fong Yoneda, script development consultant and author of The Script-Selling Game: A Hollywood Insider’s Look at Getting Your Script Sold and Produced, for a book-signing and informative and entertaining discussion on the changes she’s witnessed in marketing one’s work to Hollywood over the past 25 years. Yoneda has been a Hollywood “insider” for over 25 years, specializing in story analysis/development at Disney, MGM, 20th Century Fox, Paramount and Universal. She’s held executive positions at Walt Disney, Touchstone, Island Pictures, and Disney TV Animation and has taught seminars and workshops all over North America and Europe. She is a partner in TalkStory Productions with writerproducer Pamela Wallace (Witness).

Sat, Apr 3, 5pm, 1h15, Steep & Brew PRICE NOTE: Free. SEATING ON A FIRST-COME BASIS Managers play key roles in the careers of many independent film actors, writers and directors. But what exactly does a manager do? How is a manager different from an agent (or not?) At what point in your career do you need a manager, and what should you look for? Sam Maydew (producer/manager) is president of Pop Art Films/Management in L.A. He represents clients such as writerdirector Bertha Bay-Sa Pan, at the Festival with her film Face; filmmaker, Michael Burke, who’s first film, The Mudge Boy, was produced by Stanley Tucci and premiered at Sundance 2003; and young star, Emile Hirsch, who made his feature film debut in the Jodi Foster-produced, The Dangerous Lives of Altar Boys. Mr. Maydew has produced five feature films, including the critically acclaimed Sundance classic, SLC Punk. Maydew will give a brief overview of what he does and how he sees his work as a manager, and then take your questions. Series: Insider; Sponsor: Steep & Brew

Indies, Festivals and the Presentation of Cinema in the USA

Sat, Apr 3, 3pm, 2h15, Play Circle PRICE NOTE: Tickets are required. ORDER CODE: EYE Eyes Without a Face, Georges Franju’s coolly stylish 1960 exercise in B&W horror, is a prime example of the kinds of genre movies regularly elevated to the status of art by the 1960s film societies and their eager young explorers at the fringes of cinema. In fact, while the movie was given scant drive-in and grind-house release under the trashy American title The Horror Chamber of Dr. Faustus, the film society cognoscenti of the 1960s eagerly embraced the original French language version, and, along with Franju’s similarly distinctive Judex, promoted the films to the pantheon rank of screen fantasy. (Over 35 years later, Eyes would be rediscovered when a reissue showcased it as part of the 2003 New York fall film season.) It is a complete cinematic revelation, a historically interesting example of genre storytelling, and (lest we forget) a horrific bon bon of an entertainment. Following the film, our annual panel of appropriately greyheaded wiseacres will briefly discuss the art of the genre film.

Thu, Apr 1, 3:30pm, 1h30, Cinematheque PRICE NOTE: Free. SEATING ON A FIRST-COME BASIS Douglas Gomery, a leading film historian and recognized authority on the economics of the American film industry, will speak about the role of film festivals and independent film in the presentation of cinema in the United States. Gomery is Professor of Media History and Resident Scholar at the Library of American Broadcasting at the University of Maryland. Of Gomery’s 12 books, two have won national book awards: Who Owns the Media? and Shared Pleasures: A History of Movie Presentation in the United States. Gomery is also co-author of the widely-used Film History: Theory and Practice, the essential reference for graduate film historiography courses, and author of The Hollywood Studio System. Gomery earned his Ph.D. at the University of Wisconsin in 1975, and his MA in 1970.

As part of the Wisconsin Film Festival’s Bergman’s Show, which annually recalls Madison’s yeasty film society legacy of the 1960s, we are happy to once again present a cinematic rarity worthy of celebration. Special thanks to Ronee Bergman.

Coffehouse Discussion with Documentary Producers Lisa Heller and Mark Samels Fri, Apr 2, 5pm, 1h15, Steep & Brew PRICE NOTE: Free. SEATING ON A FIRST-COME BASIS Many questions can arise when preparing a documentary project for production. What do producers, money people and distributors look for? How do I approach them and at what stage in my project? Which market is best for my project — local television, national or theatrical? Seasoned documentary producers and programmers Mark Samels, Executive Producer, PBS’s American Experience, and Lisa Heller, Vice President of Original Programming at HBO, will offer their inside tips on the basics of documentary producing and programming. Series: Insider, Documentary; Sponsor: Wisconsin Public Television, Steep & Brew

Mark Moskowitz, Stone Reader, will appear on ‘To the Best of Our Knowledge.’ Getting it Made, Getting it Seen: Documentary Production, Funding and Programming Sat, Apr 3, 10am, 1h30, Tripp Commons PRICE NOTE: Free. SEATING ON A FIRST-COME BASIS

Over the past two decades, documentary films have gained momentum with American audiences and show no signs of slowing down. For documentary filmmakers, what are the opportunities and challenges involved in developing a project, getting it made and getting it seen by an audience? UW-Madison alumni Lisa Heller and Mark Samels What do documentary prodiscuss the finer points of documentary production. ducers and programmers look for? What kind of documentary project has the potential for national exposure, either on television or theatrical? This panel features IFC Ultimate Film Fanatic Challenge two seasoned documentary producers and Fri, Apr 2, 7pm, 3h decision-makers (both UW-Madison alumni): Lakeshore Cafeteria-Memorial Union Mark Samels, Executive Producer, PBS’s PRICE NOTE: Free. SEATING ON A FIRST-COME BASIS. American Experience, and Lisa Heller, Vice Hey, film buffs and movie geeks — do you have President of Original Programming at HBO, what it takes to be the Ultimate Film Fanatic? as well as the filmmakers behind three docuFind out with the Independent Film Channel at mentary projects presented at the Festival: this live Ultimate Film Fanatic Challenge. Barak Goodman (The Fight, American ExperiWatch or join in as contestants from the audience); Kate Davis and David Heilbroner (Jockence face off to answer the ultimate film trivia ey, HBO); and Marian Marzynski (Patriots Day, questions. Stop by between films or stay all American Experience). They will discuss curnight — this game will run to 10pm, with four rent issues in documentary production, fundcontestants chosen for each round. If you’ve ing and programming, illustrated with brief got the answers, you’ll win a prize. Those who “how we did it” case studies of each film projdon’t win still get something just for playing. ect and followed by an audience Q & A session. Series: Insider; Sponsor: Charter Communications, Series: Insider, Documentary; Sponsor: Wisconsin Public Television

To the Best of Our Knowledge - Live Sat, Apr 3, 3pm, 1h30, Orpheum - Main PRICE NOTE: Free. SEATING ON A FIRST-COME BASIS Join Jim Fleming, Steve Paulson and Anne Strainchamps, hosts of Wisconsin Public Radio’s nationally syndicated program “To the Best of Our Knowledge,” for an interview event at the Orpheum, which will be recorded for a future broadcast. The show will feature some of the Festival’s most intriguing guests, including Danish writer / director Lone Scherfig, whose beguiling romantic comedy Italian for Beginners (2000) became the most commercially successful of all Dogme films and who is at the Wisconsin Film Festival with her new film Wilbur Wants to Kill Himself; and Mark Moskowitz, producer and director of the critically-acclaimed documentary Stone Reader, also well-known for his more than three thousand political spots for hundreds of campaigns. Moskowitz has been awarded “Pollies,” political media’s highest award, for five consecutive years. Newsweek described his media as “brilliantly targeted,” and CNN called it “a model of the medium.” This lively event will also feature musical interludes from The Lonesome Organist, the one-man band with a taste for the vaudevillian, featured in the film Let Me Be Your Band. Series: Insider