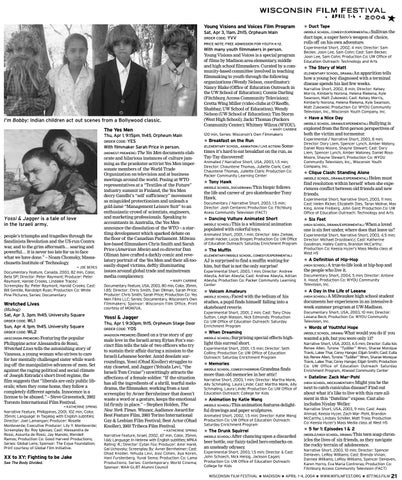 (MIDDLE SCHOOL, COMEDY/EXPERIMENTAL) Sullivan the duct tape, a super hero’s weapon of choice, rolls off on his own adventure.

Yossi & Jagger is a tale of love in the Israeli army. people’s triumphs and tragedies through the Sandinista Revolution and the US-run Contra war, and to the grim aftermath… searing and powerful… it is never too late for us to face what we have done.” – Noam Chomsky, Massachusetts Institute of Technology. — JOE BERES

XX to XY: Fighting to be Jake See The Body Divided.

Thu, Apr 1, 9:15pm, 1h45, Orpheum Main ORDER CODE: YES With filmmaker Sarah Price in person. (MIDWEST PREMIERE) The Yes Men documents elaborate and hilarious instances of culture jamming as the prankster-activist Yes Men impersonate members of the World Trade Organization on television and at business meetings around the world. Posing at WTO representatives at a “Textiles of the Future” industry summit in Finland, the Yes Men decry Gandhi’s “self sufficiency” movement as misguided protectionism and unleash a gold-lamé “Management Leisure Suit” to an enthusiastic crowd of scientists, engineers, and marketing professionals. Speaking to accountants in Australia, the Yes Men announce the dissolution of the WTO – a startling development which sparked debate on the floor of the Canadian Parliament. Milwaukee-based filmmakers Chris Smith and Sarah Price (American Movie) and co-director Dan Ollman have crafted a darkly comic and revelatory portrait of the Yes Men and their all-tooeasily-duped victims, deftly illuminating issues around global trade and mainstream media complacency. — MARY CARBINE

★ Breakfast on the Run (ELEMENTARY SCHOOL, ANIMATION / LIVE ACTION) Some-

the life and career of pro skateboarder Tony Hawk.

★ The Story of Matt (ELEMENTARY SCHOOL, DRAMA) An apparition tells how a young boy diagnosed with a terminal disease spends his last few weeks.

★ Have a Nice Day (MIDDLE SCHOOL, DRAMA/EXPERIMENTAL) Bullying is

find resolution within herself when she experiences conflict between old friends and new friends.

(MIDDLE SCHOOL) This is a whimsical animation

(HIGH SCHOOL, DRAMA/EXPERIMENTAL) When a loved

one is six feet under, where does that leave us?

AJ is surprised to find a muffin waiting for him, but that is not the only surprise!

the people who live it.

★ A Day in the Life of Leeana

(MIDDLE SCHOOL) Faced with the tedium of

his studies, a pupil finds himself falling into a skateboard reverie.

(MIDDLE SCHOOL, DRAMA) What would you do if

documents her experiences in an intensive 8week summer program at UW-Madison.

★ Words of Youthful Hope you

★ Dateline: Zack Mar-Pohl (HIGH SCHOOL, MOCKUMENTARY) Might you be the next to catch cuniculus disease? Find out about what it’s like to live with this rare ailment in this “Dateline” expose. Cast also includes Nyalay Weller.

(MIDDLE SCHOOL) After chancing upon a discarded

(MIDDLE/HIGH SCHOOL, DRAMA) This teen soap chronicles the lives of six friends, as they navigate the rocky terrain of adolescence.