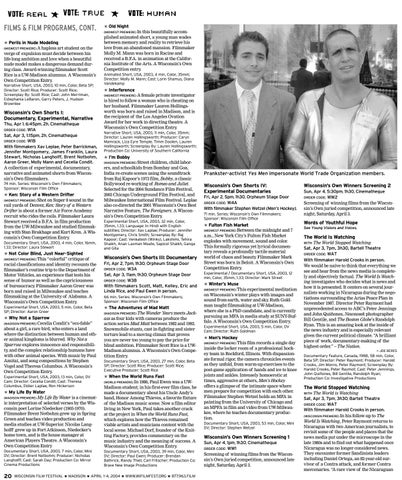 FILMS & FILM PROGRAMS, CONT. ★ Perils in Nude Modeling (MIDWEST PREMIERE) A hapless art student on the verge of expulsion must decide between his life-long ambition and love when a beautiful nude model makes a dangerous demand during class. Award-winning filmmaker Scott Rice is a UW-Madison alumnus. A Wisconsin’s Own Competition Entry.

★ Ken: Story of a Western Drifter (MIDWEST PREMIERE) Shot on Super 8 sound in the rail yards of Denver, Ken: Story of a Western Drifter is about a former Air Force Academy recruit who rides the rails. Filmmaker Laura Stewart received a B.F.A. in film production from the UW-Milwaukee and studied filmmaking with Stan Brakhage and Kurt Kren. A Wisconsin’s Own Competition Entry.

★ Not Color Blind, Just Near-Sighted (MIDWEST PREMIERE) This “colorful” critique of racial classifications and identity recounts the filmmaker’s routine trip to the Department of Motor Vehicles, an experience that tests his sense of humor as well as the capriciousness of bureaucracy. Filmmaker Aaron Greer was born and raised in Milwaukee and teaches filmmaking at the University of Alabama. A Wisconsin’s Own Competition Entry.

★ Old Night (MIDWEST PREMIERE) In this beautifully accomplished animated short, a young man wades between memory and reality to retrieve his love from an abandoned mansion. Filmmaker Molly M. Mann was born in Racine and received a B.F.A. in animation at the California Institute of the Arts. A Wisconsin’s Own Competition entry.

★ Interference (MIDWEST PREMIERE) A female private investigator is hired to follow a woman who is cheating on her husband. Filmmaker Lauren Hollingsworth was born and raised in Madison, and is the recipient of the Los Angeles Ovation Award for her work in directing theatre. A Wisconsin’s Own Competition Entry.

★ The Adventures of Mad Matt

★ Why Not a Sparrow

ass as four kids with cameras produce the action series Mad Matt between 1982 and 1992. Snowmobile stunts, cast in-fighting and sister torture lead to a moving climax that proves you are never too young to pay the price for blind ambition. Filmmaker Scott Rice is a UWMadison alumnus. A Wisconsin’s Own Competition Entry.

about a girl, a rare bird, who enters a land where the distinction between human and other animal kingdoms is blurred. Why Not a Sparrow explores innocence and responsibility, and the complex relationship humans have with other animal species. With music by Paul Amitai, and song compositions by Stephen Vogel and Theresa Columbus. A Wisconsin’s Own Competition Entry. Experimental Short, USA, 2003, 13 min, Color, DV Cam; Director: Cecelia Condit; Cast: Theresa Columbus, Didier Laplae, Ron Hickerson

★ When the World Runs Fast

ic interpretation of selected verses by the Wisconsin poet Lorine Niedecker (1903-1970). Filmmaker Brent Notbohm grew up in Spring Green and teaches video production and media studies at UW-Superior. Nicolas Langholff grew up in Fort Atkinson, Niedecker’s home town, and is the house manager at American Players Theatre. A Wisconsin’s Own Competition Entry

(WORLD PREMIERE) In 1986, Paul Ewen was a UWMadison student; in his first-ever film class, he made a documentary about his Uncle Andy’s band, Honor Among Thieves, a favorite fixture of the Madison music scene. Now a film editor living in New York, Paul takes another crack at the project in When the World Runs Fast, which explores how the Thieves remained viable artists and musicians content with the local scene. Michael Dorf, founder of the Knitting Factory, provides commentary on the music industry and the meaning of success. A Wisconsin’s Own Competition Entry.

★ Fulton Fish Market (MIDWEST PREMIERE) Between the midnight and 7

★ Winter’s Muse (MIDWEST PREMIERE) This experimental meditation on Wisconsin’s winter plays with images and sound from earth, water and sky. Ruth Goldman taught filmmaking at UW-Madison, where she is a PhD candidate, and is currently pursuing an MFA in media study at SUNY-Buffalo. A Wisconsin’s Own Competition Entry.

★ Men’s Hockey (MIDWEST PREMIERE) This film records a single day inside the locker room of a professional hockey team in Rockford, Illinois. With dispassionate formal rigor, the camera chronicles events as they unfold, from warm-up exercises to the post-game application of hands and ice to knee joints and ankles. Intensely homoerotic at times, aggressive at others, Men’s Hockey offers a glimpse of the intimate space where men prepare for competition with each other. Filmmaker Stephen Wetzel holds an MFA in painting from the University of Chicago and an MPFA in film and video from UW-Milwaukee, where he teaches documentary production.

The World Is Watching WITH The

Sat, Apr 3, 7pm, 3h30, Bartell Theatre ORDER CODE: WAT With filmmaker Harold Crooks in person. We would be naïve to think that everything we see and hear from the news media is completely and objectively factual. The World Is Watching investigates who decides what is news and how it is presented. It centers on several journalists working in Nicaragua during the negotiations surrounding the Arias Peace Plan in November 1987. Director Peter Raymont had unprecedented access to ABC’s Peter Jennings and John Quiñones, Newsweek photographer Bill Gentile, and The Boston Globe’s Randolph Ryan. This is an amazing look at the inside of the news industry and is especially relevant given the current political climate. “A brilliant piece of work, documentary-making of the highest order.” – The Nation. — JOE BERES

The World Stopped Watching WITH The

Sat, Apr 3, 7pm, 3h30, Bartell Theatre ORDER CODE: WAT With filmmaker Harold Crooks in person. (WISCONSIN PREMIERE) In his follow-up to The World Is Watching, Peter Raymont returns to Nicaragua with two American journalists, to revisit some of the people and places that the news media put under the microscope in the late 1980s and to find out what happened once Nicaragua was no longer considered news. They encounter former Sandinista leaders including Daniel Ortega, an 82-year-old survivor of a Contra attack, and former Contra mercenaries. “A rare view of the Nicaraguan