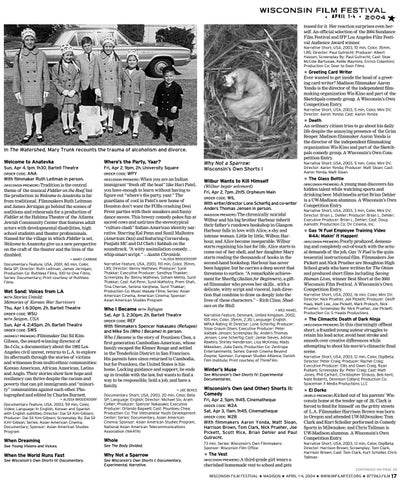 ★ Greeting Card Writer Ever wanted to get inside the head of a greeting card writer? Madison filmmaker Aaron Yonda is the director of the independent filmmaking organization Wis-Kino and part of the Sketchpals comedy group. A Wisconsin’s Own Competition Entry. Narrative Short, USA, 2003, 5 min, Color, Mini DV; Director: Aaron Yonda; Cast: Aaron Yonda

★ Death An ordinary citizen tries to go about his daily life despite the annoying presence of the Grim Reaper. Madison filmmaker Aaron Yonda is the director of the independent filmmaking organization Wis-Kino and part of the Sketchpals comedy group. A Wisconsin’s Own Competition Entry.

In The Watershed, Mary Trunk recounts the trauma of alcoholism and divorce. Welcome to Anatevka

Sun, Apr 4, 1pm, 1h30, Bartell Theatre ORDER CODE: ANA With filmmaker Ruth Leitman in person. (WISCONSIN PREMIERE) Tradition is the central theme of the musical Fiddler on the Roof, but the production in Welcome to Anatevka is far from traditional. Filmmakers Ruth Leitman and James Jernigan go behind the scenes of auditions and rehearsals for a production of Fiddler at the Habima Theater of the Atlanta Jewish Community Center that features adult actors with developmental disabilities, high school students and theater professionals. Named for the village in which Fiddler is set, Welcome to Anatevka give us a new perspective on the craft of the theater and the lives of the disabled.

Fri, Apr 2, 9pm, 2h, University Square ORDER CODE: WPY (WISCONSIN PREMIERE) When you are an Indian immigrant “fresh off the boat” like Hari Patel, you have enough to learn without having to figure out “where’s the party, yaar.” The guardians of cool in Patel’s new home of Houston don’t want the FOBs crashing Desi Fever parties with their sneakers and funny dance moves. This breezy comedy pokes fun at sacred cows and satirizes the stereotypical “culture clash” Indian-American identity narrative. Starring Kal Penn and Sunil Malhotra (American Desi) and featuring Cornershop, Panjabi MC and DJ Cheb i Sabbah on the soundtrack. “A witty assimilation comedy… whip-smart script.” – Austin Chronicle. — ALISSA BRODERDORF

Sun, Apr 4, 2:45pm, 2h, Bartell Theatre ORDER CODE: SWS (MIDWEST PREMIERE) Filmmaker Dai Sil KimGibson, the award-winning director of Sa-I-Gu, a documentary about the 1992 Los Angeles civil unrest, returns to L.A. to explore its aftermath through the stories of victims and witnesses from multi-ethnic communities: Korean American, African American, Latino and Anglo. Their stories show how hope and resiliency can thrive despite the racism and poverty that can pit immigrants and “minority” communities against each other. Photographed and edited by Charles Burnett.

Who I Became WITH Refugee

Why Not a Sparrow: Wisconsin’s Own Shorts I

Wilbur Wants to Kill Himself

Fri, Apr 2, 7pm, 2h15, Orpheum Main ORDER CODE: WIL With writer/director Lone Scherfig and co-writer Anders Thomas Jensen in person. (MADISON PREMIERE) The chronically suicidal Wilbur and his big brother Harbour inherit their father’s rundown bookshop in Glasgow. Harbour falls in love with Alice, a shy and intense woman. Little by little, Wilbur, Harbour, and Alice become inseparable. Wilbur starts regaining his lust for life, Alice starts to come out of her shell, and her daughter Mary starts reading the thousands of books in the second-hand bookshop. Harbour has never been happier, but he carries a deep secret that threatens to surface. “A remarkable achievement for Sherfig (Italian for Beginners), a gifted filmmaker who proves her skills...with a delicate, witty script and visceral, lush direction that combine to draw us deeply into the lives of these characters.” – Rich Cline, Shadows on the Wall. — MEG HAMEL

Sat, Apr 3, 2:30pm, 2h, Bartell Theatre ORDER CODE: REF With filmmakers Spencer Nakasako (Refugee) and Mike Siv (Who I Became) in person. Who I Became is the story of Pounloeu Chea, a first generation Cambodian-American, whose family escaped the Khmer Rouge and settled in the Tenderloin District in San Francisco. His parents have since returned to Cambodia, but for Pounloeu, the United States is his home. Lacking guidance and support, he ends up in trouble with the law, but wants to find a way to be responsible, hold a job, and have a family. — JOE BERES

Wisconsin’s Own (and Other) Shorts II: Comedy

When the World Runs Fast

Why Not a Sparrow

★ The Climactic Death of Dark Ninja (WISCONSIN PREMIERE) In this charmingly offbeat short, a frazzled young auteur struggles to retain his lead actor, avoid heat stroke and smooth over creative differences while attempting to shoot his movie’s climactic final scene.

★ El Dorko (WORLD PREMIERE) Kicked out of his parents’ Wisconsin home at the tender age of 28, Clark is forced to fend for himself on the gritty streets of L.A. Filmmaker Harrison Brown was born in Oregon and attended UW-Milwaukee; Tom Clark and Kurt Scholler performed in Comedy Sportz in Milwaukee; and Chris Tallman is UW-Madison alumnus. A Wisconsin’s Own Competition Entry.