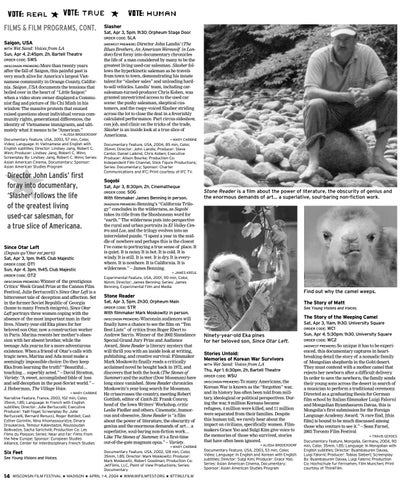 Sun, Apr 4, 2:45pm, 2h, Bartell Theatre ORDER CODE: SWS (WISCONSIN PREMIERE) More than twenty years after the fall of Saigon, this painful past is very much alive for America’s largest Vietnamese community in Orange County, California. Saigon ,USA documents the tensions that boiled over in the heart of “Little Saigon” when a video store owner displayed a Communist flag and picture of Ho Chi Minh in his window. The massive protests that ensued raised questions about individual versus community rights, generational differences, the identity of Vietnamese immigrants, and ultimately what it means to be “American.” — ALISSA BRODERDORF

Sat, Apr 3, 1pm, 1h45, Club Majestic ORDER CODE: OT1 Sun, Apr 4, 3pm, 1h45, Club Majestic ORDER CODE: OT2 (WISCONSIN PREMIERE) Winner of the prestigious Critics’ Week Grand Prize at the Cannes Film Festival, Julie Bertuccelli’s Since Otar Left is a bittersweet tale of deception and affection. Set in the former Soviet Republic of Georgia (home to many French émigrés), Since Otar Left portrays three women coping with the absence of the most important man in their lives. Ninety-year-old Eka pines for her beloved son Otar, now a construction worker in Paris. Marina resents her mother’s obsession with her absent brother, while the teenage Ada yearns for a more adventurous existence. When a friend of Otar’s calls with tragic news, Marina and Ada must make a seemingly impossible choice: Do they keep Eka from learning the truth? “Beautiful… touching… superbly acted.” – David Stratton, Variety. “A sweet, accomplished fable of loss and self-deception in the post-Soviet world.” – J. Hoberman, The Village Voice. — MARY CARBINE

Slasher Sat, Apr 3, 5pm, 1h30, Orpheum Stage Door ORDER CODE: SLA (MIDWEST PREMIERE) Director John Landis’ (The Blues Brothers, An American Werewolf in London) first foray into documentary chronicles the life of a man considered by many to be the greatest living used-car salesman. Slasher follows the hyperkinetic saleman as he travels from town to town, demonstrating his innate talent for “slasher sales” and unloading hardto-sell vehicles. Landis’ team, including carsalesman-turned-producer Chris Koben, was granted unrestricted access to the used car scene: the pushy salesman, skeptical customers, and the raspy-voiced Slasher striding across the lot to close the deal in a feverishly calculated performance. Part circus sideshow, con job, and clinic on the tricks of the trade, Slasher is an inside look at a true slice of Americana. — MARY CARBINE

Sogobi Sat, Apr 3, 8:30pm, 2h, Cinematheque ORDER CODE: SOG With filmmaker James Benning in person. (MADISON PREMIERE) Benning’s “California Trilogy” concludes in the wilderness, as Sogobi takes its title from the Shoshonean word for “earth.” The wilderness puts into perspective the rural and urban portraits in El Valley Centro and Los, and the trilogy evolves into an interrelated puzzle. “I spent a year in the middle of nowhere and perhaps this is the closest I’ve come to portraying a true sense of place. It is quiet. It is noisy. It is hot. It is cold. It is windy. It is still. It is wet. It is dry. It is everywhere. It is nowhere. It is California. It is wilderness.” – James Benning. — JAMES KREUL

Find out why the camel weeps.

Stone Reader Sat, Apr 3, 5pm, 2h30, Orpheum Main ORDER CODE: STR With filmmaker Mark Moskowitz in person. (WISCONSIN PREMIERE) Wisconsin audiences will finally have a chance to see the film on “Ten Best Lists” of critics from Roger Ebert to Andrew Sarris. Winner of the 2002 Slamdance Special Grand Jury Prize and Audience Award, Stone Reader is literary mystery that will thrill you with an inside look at writing, publishing, and creative survival. Filmmaker Mark Moskowitz finally reads a critically acclaimed novel he bought back in 1972, and discovers that both the book (The Stones of Summer) and the author (Dow Mossman) have long since vanished. Stone Reader chronicles Moskowitz’s year-long search for Mossman. He crisscrosses the country, meeting Robert Gottlieb, editor of Catch-22, Frank Conroy, head of the Iowa Writers’ Workshop, critic Leslie Fiedler and others. Cinematic, humorous and obsessive, Stone Reader is “a film about the power of literature, the obscurity of genius and the enormous demands of art… a superlative, soul-baring non-fiction work… Like The Stones of Summer, it’s a first-time out-of-the-gate magnum opus.” – Variety. — MARY CARBINE

Stone Reader is a film about the power of literature, the obscurity of genius and the enormous demands of art… a superlative, soul-baring non-fiction work.

The Story of Matt See Young Visions and Voices.

The Story of the Weeping Camel

Thu, Apr 1, 6:30pm, 2h, Bartell Theatre ORDER CODE: WSU (WISCONSIN PREMIERE) To many Americans, the Korean War is known as the “forgotten” war, and its history has often been told from military, ideological or political perspectives. During the war, 9 million Koreans became refugees, 4 million were killed, and 11 million were separated from their families. Despite this human toll, we rarely hear about the impact on civilians, specifically women. Filmmakers Grace Yoo and Sulgi Kim give voice to the memories of those who survived, stories that have often been ignored. — ALISSA BRODERDORF

Sat, Apr 3, 11am, 1h30, University Square ORDER CODE: WC1 Sun, Apr 4, 5:30pm, 1h30, University Square ORDER CODE: WC2 (MIDWEST PREMIERE) So unique it has to be experienced, this documentary captures in heartbreaking detail the story of a nomadic family of Mongolian shepherds in the Gobi desert. They must contend with a mother camel that rejects her newborn after a difficult delivery. In order to save the newborn, the family sends their young sons across the desert in search of a musician to perform a traditional ceremony. Directed as a graduating thesis for German film school by Italian filmmaker Luigi Falorni and Mongolian Byambasuren Davaa, this is Mongolia’s first submission for the Foreign Language Academy Award. “A rare find, [this film] is bound to be much discussed among those who venture to see it.” – Sean Farnel, 2003 Toronto Film Festival — TRAVIS GERDES