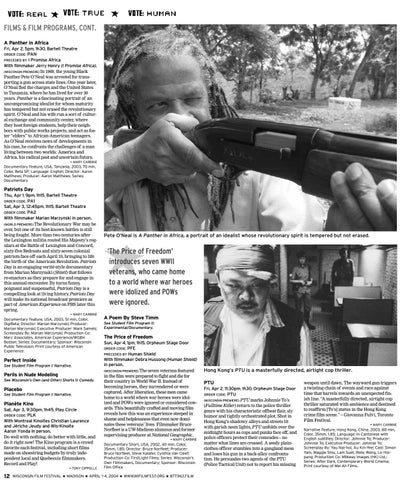 FILMS & FILM PROGRAMS, CONT. A Panther in Africa Fri, Apr 2, 5pm, 1h30, Bartell Theatre ORDER CODE: PAN PRECEDED BY I Promise Africa With filmmaker Jerry Henry (I Promise Africa). (WISCONSIN PREMIERE) In 1969, the young Black Panther Pete O’Neal was arrested for transporting a gun across state lines. One year later, O’Neal fled the charges and the United States to Tanzania, where he has lived for over 30 years. Panther is a fascinating portrait of an uncompromising idealist for whom maturity has tempered but not erased the revolutionary spirit. O’Neal and his wife run a sort of cultural exchange and community center, where they host foreign students, help their neighbors with public works projects, and act as foster “elders” to African-American teenagers. As O’Neal receives news of developments in his case, he confronts the challenges of a man living between two worlds: America and Africa, his radical past and uncertain future. — MARY CARBINE

Patriots Day Thu, Apr 1, 9pm, 1h15, Bartell Theatre ORDER CODE: PA1 Sat, Apr 3, 12:45pm, 1h15, Bartell Theatre ORDER CODE: PA2 With filmmaker Marian Marzynski in person. (WORLD PREMIERE) The Revolutionary War may be over, but one of its best-known battles is still being fought. More than two centuries after the Lexington militia routed His Majesty’s regulars at the Battle of Lexington and Concord, sixty-five Redcoats and sixty-seven colonial patriots face off each April 19, bringing to life the birth of the American Revolution. Patriots Day is an engaging verité-style documentary from Marian Marzynski (Shtetl) that follows re-enactors as they prepare for and engage in this annual encounter. By turns funny, poignant and suspenseful, Patriots Day is a compelling look at living history. Patriots Day will make its national broadcast premiere as part of American Experience on PBS later this spring. — MARY CARBINE

Perils in Nude Modeling See Wisconsin’s Own (and Other) Shorts II: Comedy.

Planète Kino Sat, Apr 3, 9:30pm, 1h45, Play Circle ORDER CODE: PLK With Montreal Kinoites Christian Laurence and Jéricho Jeudy and Wis-Kinoite Aaron Yonda in person. Do well with nothing, do better with little, and do it right now! The Kino program is a crowd favorite each festival, including short films made on shoestring budgets by truly independent local and Quebecois filmmakers. Record and Play! — TONY CIPPOLLE

Pete O’Neal is A Panther in Africa, a portrait of an idealist whose revolutionary spirit is tempered but not erased.

‘The Price of Freedom’ introduces seven WWII veterans, who came home to a world where war heroes were idolized and POWs were ignored. A Poem By Steve Timm See Student Film Program II: Experimental/Documentary.

The Price of Freedom Sun, Apr 4, 1pm, 1h15, Orpheum Stage Door ORDER CODE: PFE PRECEDED BY Human Shield With filmmaker Debra Hussong (Human Shield) in person. (WISCONSIN PREMIERE) The seven veterans featured in the film were prepared to fight and die for their country in World War II. Instead of becoming heroes, they surrendered or were captured. After liberation, these men came home to a world where war heroes were idolized and POWs were ignored or considered cowards. This beautifully crafted and moving film reveals how this was an experience steeped in shame and helplessness that even now dominates these veterans’ lives. Filmmaker Bruce Norfleet is a UW-Madison alumnus and former supervising producer at National Geographic. — MARY CARBINE