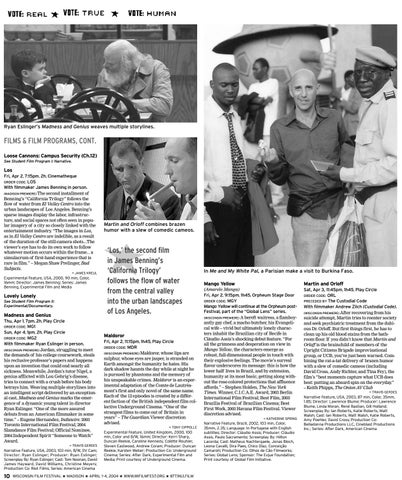 Los Fri, Apr 2, 7:15pm, 2h, Cinematheque ORDER CODE: LOS With filmmaker James Benning in person. (MADISON PREMIERE) The second installment of Benning’s “California Trilogy” follows the flow of water from El Valley Centro into the urban landscapes of Los Angeles. Benning’s sparse images display the labor, infrastructure, and social spaces not often seen in popular imagery of a city so closely linked with the entertainment industry. “The images in Los, as in El Valley Centro are indelible, as a result of the duration of the still-camera shots...The viewer’s eye has to do its own work to follow whatever motion occurs within the frame... a simulacrum of first-hand experience that is rare in film.” – Megan Shaw Prelinger, Bad Subjects. — JAMES KREUL

Martin and Orloff combines brazen humor with a slew of comedic cameos.

‘Los,’ the second film in James Benning’s ‘California Trilogy’ follows the flow of water from the central valley into the urban landscapes of Los Angeles. Maldoror Fri, Apr 2, 11:15pm, 1h45, Play Circle ORDER CODE: MDR (WISCONSIN PREMIERE) Maldoror, whose lips are sulphur, whose eyes are jasper, is stranded on Earth amongst the humanity he hates. His dark shadow haunts the day while at night he is pursued by phantoms and the memory of his unspeakable crimes. Maldoror is an experimental adaptation of the Comte de Lautréamont’s first and only novel of the same name. Each of the 12 episodes is created by a different faction of the British independent film collective Underground Cinema. “One of the strangest films to come out of Britain in years” – The Guardian.Viewer discretion advised. — TONY CIPPOLLE

In Me and My White Pal, a Parisian make a visit to Burkina Faso. Mango Yellow

Sat, Apr 3, 11:45pm, 1h45, Play Circle ORDER CODE: ORL PRECEDED BY The Custodial Code With filmmaker Andrew Zilch (Custodial Code). (WISCONSIN PREMIERE) After recovering from his suicide attempt, Martin tries to reenter society and seek psychiatric treatment from the dubious Dr. Orloff. But first things first, he has to clean up his old blood stains from the bathroom floor. If you didn’t know that Martin and Orloff is the brainchild of members of the Upright Citizens Brigade improvisational group, or UCB, you’ve just been warned. Combining the rat-a-tat delivery of brazen humor with a slew of comedic cameos (including David Cross, Andy Richter, and Tina Fey), the film’s “best moments capture what UCB does best: putting an absurd spin on the everyday.” – Keith Phipps, The Onion AV Club

Fri, Apr 2, 9:15pm, 1h45, Orpheum Stage Door ORDER CODE: MGY Mango Yellow will continue at the Orpheum postFestival, part of the “Global Lens” series. (WISCONSIN PREMIERE) A bereft waitress, a flamboyantly gay chef, a macho butcher, his Evangelical wife – vivid but ultimately lonely characters inhabit the Brazilian city of Recife in Cláudio Assis’s shocking debut feature. “For all the grimness and desperation on view in Mango Yellow, the characters emerge as robust, full-dimensional people in touch with their explosive feelings. The movie’s surreal flavor underscores its message: this is how the lower half lives in Brazil, and by extension, humanity at its most basic, getting along without the rose-colored protections that affluence affords.” – Stephen Holden, The New York Times. Winner, C.I.C.A.E. Award, 2003 Berlin International Film Festival; Best Film, 2003 Brazilia Festival of Brazilian Cinema; Best First Work, 2003 Havana Film Festival. Viewer discretion advised. — KATHERINE SPRING