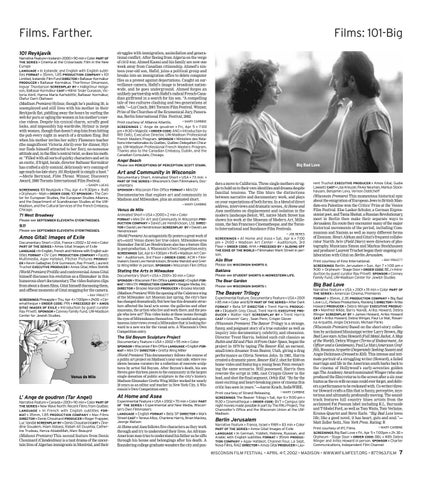 (Madison Premiere) Hylnur, though he’s pushing 30, is unemployed and still lives with his mother in their Reykjavík flat, piddling away the hours by surfing the web for porn or ogling the women in his mother’s exercise videos. Despite his cynical charm, scruffy good looks, and impossibly hip wardrobe, Hylnur is inept with women, though that doesn’t stop him from hitting the pub every night in search of a drunken fling. But when his mother invites her sultry Flamenco teacher (the magnificent Victoria Abril) over for dinner, Hylnur finds himself attracted to her fiery, no-nonsense attitude and, in the film’s central twist, so does his mother. “Filled with all sorts of quirky characters and set in an exotic, if frigid, locale, director Baltasar Kormákur has crafted a slyly comical, deliciously wry coming-ofage much-too-late story. 101 Reykjavík is simply a hoot.” —Merle Bertrand, Film Threat. Winner, Discovery Award, 2000 Toronto International Film Festival. — SANDY LUCAS SCREENINGS 101 Reykjavík > Thu, Apr 4 > 9:30pm > 1h45 > Orpheum - Main > ORDER CODE: 101 SPONSOR > The Cen-

Documentaries that explore art and community in Madison and Milwaukee, plus an animated short. — MARY CARBINE

Documentary Short > USA > 2001 > 30 min > Color SPONSOR > Wisconsin Film Office LANGUAGE > English FORMAT > Mini DV PRODUCTION COMPANY > Magpie Media, Inc. DIRECTOR > Brooke Maroldi PRODUCER > Brooke Maroldi (Madison Premiere) With the opening of the Calatrava wing of the Milwaukee Art Museum last spring, the city’s face has changed dramatically. But how has this dramatic structure affected the local arts scene: the galleries and other museums, the artists who live and work there, and the people who love art? This video looks at these issues through the eyes of Milwaukeans themselves. The candid and spontaneous interviews reveal a Milwaukee that is looking forward to a new era for the visual arts. A Wisconsin’s Own Competition entry.

At Home and Asea

At Home and Asea follows five characters as they work through and try to understand their lives. An AfricanAmerican man tries to understand his father as he sifts through his house and belongings after his death. A floundering college graduate wanders the city and pon-

(Midwest Premiere) This second feature from Denis Chouinard (Clandestines) is a taut drama of the uncertain lives of Algerian immigrants in Montréal, and their

ders a move to California. Three single mothers struggle to hold on to their own identities and dreams despite familial tensions. The film blurs the distinctions between narrative and documentary work, and plays on your expectations of both forms. In a blend of direct address, interviews and dramatic scenes, At Home and Asea meditates on displacement and isolation in the modern landscape.Beloit, WI, native Mark Street has shown his work at the Museum of Modern Art, Millenium, the San Francisco Cinematheque, and the Toronto International and Sundance Film Festivals.

Stating the Arts in Milwaukee

(Wisconsin Premiere) The Beaver Trilogy is a strange, funny, and poignant story of a true outsider as well as inquiry into documentary, celebrity, and obsession. Director Trent Harris, behind such cult classics as Rubin and Ed and Plan 10 From Outer Space, began the project in 1979 by taping The Beaver Kid, an earnest, small-town dreamer from Beaver, Utah, giving a drag performance as Olivia Newton John. In 1981, Harris created a dramatic piece, Beaver Kid 2, shot for $100 on home video and featuring a young Sean Penn reenacting the same scenario. Still possessed, Harris then rewrote the script in 1985, cast Crispin Glover in the lead, and shot the final segment, Orkly Kid. “By far the most exciting and heart-breaking piece of cinema this critic has seen in years.”—Aaron Krach, IndieWIRE. — MARY CARBINE Print courtesy of Strand Releasing. SCREENINGS The Beaver Trilogy > Sat, Apr 6 > 11:00 pm > 1h30 > Cinematheque > ORDER CODE: BVT > Campus late night movies made possible in part by The RWJ Project, The Chancellor’s Office and the Wisconsin Union at the UWMadison.