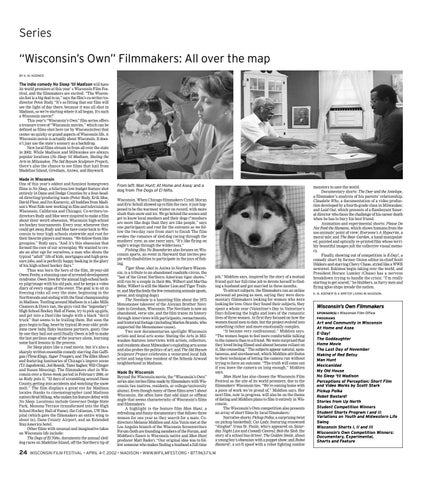 Series “Wisconsin’s Own” Filmmakers: All over the map BY K. M. KODNER

The indie comedy No Sleep ‘til Madison will have its world premiere at this year’ s Wisconsin Film Festival, and the filmmakers are excited. “The Wisconsin fest is a big deal to us,” says the film’s co-writer/codirector Peter Rudy. “It’s so fitting that our film will see the light of day there, because it was all shot in Madison, so we’re starting where it all began. It’s such a Wisconsin movie!” This year’s “Wisconsin’s Own” film series offers a treasure trove of “Wisconsin movies,” which can be defined as films shot here (or by Wisconsinites) that center on quirky or grand aspects of Wisconsin life. A Wisconsin movie is actually about Wisconsin. It doesn’t just use the state’s scenery as a backdrop. New local films stream in from all over the state in 2002. While Madison and Milwaukee are always popular locations (No Sleep ‘til Madison, Stating the Arts in Milwaukee, The Sid Boyum Sculpture Project), there’s also the chance to see films that hail from Madeline Island, Gresham, Aniwa, and Hayward.

Made in Wisconsin One of this year’s oddest and funniest homegrown films is No Sleep, a hilarious low-budget feature shot entirely in Dane and Dodge Counties by a four-headed directing/producing team (Peter Rudy, Erik Moe, David Fleer, and Ivo Knezevic, all buddies from Madison’s West Side now working in film and television in Wisconsin, California and Chicago). Co-writers/codirectors Rudy and Moe were inspired to make a film about their weird obsession, Wisconsin high-school ice-hockey tournaments. Every year, whenever they could get away, Rudy and Moe have come back to Wisconsin to tour high schools statewide and root for their favorite players and teams. “We follow them like groupies,” Rudy says. “And it’s this obsession that formed the core of our screenplay. We wanted to create an alter ego for ourselves, a man who shuns the typical “adult” life of kids, mortgages and high-pressure jobs, and is perfectly happy basking in the glory of his high-school hockey days.” Thus was born the hero of the film, 30-year-old Owen Fenby, a stunning case of arrested-development syndrome. Owen lives for the annual high-school hockey pilgrimage with his old pals, and he keeps a video diary of every stage of the event. The goal is to sit in freezing rinks all over the state, beginning in the Northwoods and ending with the final championship in Madison. Tootling around Madison in a Lake Mills Cleaners & Dyers van, the guys visit the “legendary” High School Hockey Hall of Fame, try to pick up girls, and get into a Duel-like tangle with a black “devil truck” that seems to be trailing them. But soon the guys begin to flag, beset by typical 30-year-olds’ problems (new baby, flaky business partners, gout). One by one they bail out until finally Owen is left to make the last perilous stage of the journey alone, learning some hard lessons in the process. No Sleep plays like a road movie, but it’s also a sharply written ensemble comedy starring Jim Gaffigan (Three Kings, Super Troopers, and The Ellen Show) and featuring luminaries of Chicago’s improv scene (TJ Jagodowski, Jed Resnik, Tami Sagher, Will Clinger and Susan Messing). The filmmakers shot in Wisconsin over a three-week period in February 2000, or as Rudy puts it, “22 days of scrambling around Dane County, getting into accidents and watching the snow melt.” The film displays a great eye for Madison locales thanks to cinematographer (and Madison native) Brad Milsap, who makes his feature debut with No Sleep. Locations include Governor Dodge State Park, Monona Terrace (transformed into the High School Hockey Hall of Fame), the Coliseum, UW Hospital (which gave the filmmakers an entire wing to shoot in), Dane County Airport, and an Extended StayAmerica hotel. Other films with unusual and imaginative takes on Wisconsin life include: The Dogs of El Niño, documents the annual sleddog races on Madeline Island, off the Northern tip of

From left: Man Hunt; At Home and Asea; and a dog from The Dogs of El Niño. Wisconsin. When Chicago filmmakers Cyndi Moran and Eric Scholl showed up to film the race, it just happened to be the warmest winter on record, with more slush than snow and ice. We go behind the scenes and get to know local mushers and their dogs (“mushers are more like dogs than they are like people,” says one participant) and root for the entrants as we follow the two-day race from start to finish The film evokes the romance of sled-dog racing through the mushers’ eyes; as one racer says, “It’s like flying on eagle’s wings through the wilderness.” Fishing Has No Boundaries also focuses on Wisconsin sports, an event in Hayward that invites people with disabilities to participate in the joys of fishing. Tiger Show, shot in Aniwa in Northern Wisconsin, is a tribute to an abandoned roadside circus, the “last of the Great Northern American tiger shows,” still run by a couple in their 80s, Wilbert and Martha Behn. Wilbert is still the Master Lion and Tiger Trainer, and Martha feeds the few remaining animals (goats, geese, and singing dogs). The Novitiate is a haunting film about the 1975 Menomonee takeover of the Alexian Brother Novitiate in Gresham, Wisconsin. The Novitiate is now an abandoned, eerie site, and the film traces its history through interviews with participants, reenactments, and historical footage (including Marlon Brando, who supported the Menomonee cause). Two new documentaries spotlight Wisconsin artists and local arts scene: Stating the Arts in Milwaukee features interviews with artists, collectors, and residents about Milwaukee’s exploding arts scene and also probes the politics of art; and The Sid Boyum Sculpture Project celebrates a venerated local folk artist and long-time resident of the Schenk-Atwood neighborhood in Madison.

Made By Wisconsin Beyond the Wisconsin movie, the “Wisconsin’s Own” series also invites films made by filmmakers with Wisconsin ties (natives, residents, or college/university alums). Even though many of these films aren’t about Wisconsin, the often have that odd slant or offbeat angle that seems characteristic of Wisconsin’s films and filmmakers. A highlight is the feature film Man Hunt, a refreshing and funny documentary that follows three women for one year as they search for a mate. Codirectors Melanie Middien and Alia Yunis met at the Los Angeles branch of the Wisconsin Screenwriters Forum (both are founding members of the Forum, and Middien’s fiancé is Wisconsin native and Man Hunt producer Matt Rader). “Our original idea was to follow someone who makes finding a husband a full-time

job,” Middien says, inspired by the story of a mutual friend quit her full-time job to devote herself to finding a husband and got married in three months. To attract subjects, the filmmakers ran an online personal ad posing as men, saying they were documentary filmmakers looking for women who were looking for love. Once they found their subjects, they spent a whole year (Valentine’s Day to Valentine’s Day) following the highs and lows of the romantic lives of three women. At first they focused on how the women found men to date, but the project evolved into something richer and more emotionally complex. “It became very confessional,” Middien says. “The women began to feel more comfortable talking to the camera than to a friend. We were surprised that they loved being filmed and almost became reliant on it, like counseling.” The subjects appear natural, spontaneous, and unrehearsed, which Middien attributes to their technique of letting the camera run without trying to force an outcome. “The truth will come out if you leave the camera on long enough,” Middien says. Man Hunt has also chosen the Wisconsin Film Festival as the site of its world premiere, due to the filmmakers’ Wisconsin ties. “We’re coming home with a piece of work we’re proud of,” Middien says. Her next film, now in progress, will also be on the theme of dating and Middien plans to film it entirely in Wisconsin. The Wisconsin’s Own competition also presents an array of short films by local filmmakers: Narrative shorts: Pickup Polka, a surprising twist on pickup basketball; Cat Lady, featuring renowned “dingbat” Irma St. Paule, who’s appeared on Saturday Night Live and Comedy Central; Bob the Slob, the story of a school bus driver; The Golden Smile, about a young boy’s obsession with a puppet show; and Robot Bastard!, a sci-fi spoof with a robot fighting zombie

monsters to save the world. Documentary shorts: The Deer and the Antelope, a filmmaker’s analysis of his parents’ relationship; Claudette Who, a documentation of a video production developed by a fourth-grade class in Milwaukee; and Laid Out, which presents of a flamboyant funeral director who faces the challenge of his career death when he has to bury his best friend. Animation and experimental shorts: Please Do Not Feed the Humans, which shows humans from the zoo animals’ point of view; Everyone’s A Hypocrite, a moral tale; and The Bear Garden, a hand-manipulated, painted and optically re-printed film whose terribly beautiful images jolt the collective visual memory. Finally, showing out of competition is E-Day!, a comedy short by former Onion editor-in-chief Scott Dikkers and starring Chevy Chase, styled like a WWII newsreel. Eskimos begin taking over the world, and President Horace Lumley (Chase) has a nervous breakdown trying to handle the crisis: “I’m really starting to get scared,” he blubbers, as furry men and flying igloo ships invade the nation. K. M. KODNER IS A WRITER LIVING IN MADISON.