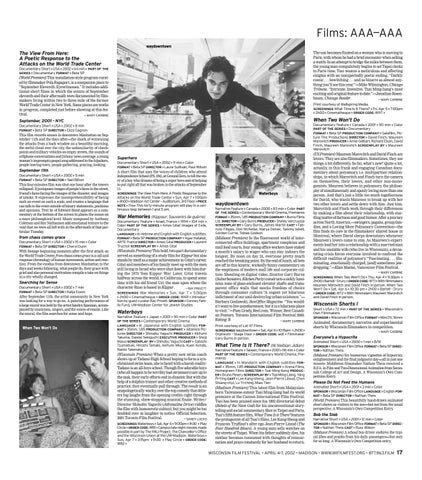 The View From Here: A Poetic Response to the Attacks on the World Trade Center

The son becomes fixated on a woman who is moving to Paris, with whom he had a brief encounter when selling a watch. In an attempt to bridge the miles between them, the young man compulsively begins to set Tapei clocks to Paris time. Tsai weaves a meticulous and affecting enigma with an unexpectedly poetic ending. “Darkly comic . . . bewitching . . . and as bizarre as almost anything you’ll see this year.”—Mike Wilmington, Chicago Tribune. “Intricate. Inventive. Tsai Ming-liang’s most exciting and original feature to date.”—Jonathan Rosenbaum, Chicago Reader. — MARY CARBINE

(World Premiere) This installation-style program curated by filmmaker Pola Rapaport, is a companion piece to “September Eleventh: Eyewitnesses.” It includes additional short films in which the events of September eleventh and their aftermath were documented by filmmakers living within two to three mile of the former World Trade Center in New York. Some pieces are works in progress, completed just before showing at this festival. — MARY CARBINE

When Two Won’t Do

Documentary Short > USA > 2002 > 8 min FORMAT > Beta SP DIRECTOR > Eliza Gagnon This film records scenes in downtown Manhattan on September 11th and the days after—the shock of witnessing the attacks from a back window on a beautiful morning, the awful cloud over the city, the unfamiliarity of checkpoints and military vehicles on empty streets, the sounds of cellphone conversations and 24-hour news coverage, a young woman’s impromptu gospel song addressed to the hijackers, people leaving town, people gathering, praying, looking.

September 11th Documentary Short > USA > 2002 > 5 min FORMAT > Beta SP DIRECTOR > Yael Bitton This four-minutes film was shot one hour after the towers collapsed. It juxtaposes images of people’s faces in the street, friend’s faces facing the images of the disaster, and images of smoke. It expresses the incomprehensibility of facing such an event on such a scale, and creates a language that can talk to the event outside of binary statements, positions and opinions. Text by of Edward Bond appears as a commentary at the bottom of the screen to places the issues on a more philosophical level. Music composed by Anthony Coleman and Roy Nathanson add emotional texture to the void that we were all left with in the aftermath of that particular Tuesday.

from chaos comes grace Documentary Short > USA > 2002 > 15 min > Color FORMAT > Beta SP DIRECTOR > Cheryl Dunn With footage beginning moments after the first attack on the World Trade Center, from chaos comes grace is a call and response chronology of human movements, action and reaction. From the exodus from downtown Manhattan to the days and weeks following, what people do, their grace with grief and also personal motivation compile a take on things in a city wholly changed.

Searching for Sense Documentary Short > USA > 2002 > 7 min FORMAT > Beta SP DIRECTOR > Katja Esson After September 11th, the artist community in New York was looking for a way to go on. A painting performance of a large mural was held by the artist Sandra Spannan, accompanied by musicians, singers, and the voices of emails. Like the mural, the film searches for sense and hope.

When Two Won’t Do

Superhero Documentary Short > USA > 2002 > 9 min > Color FORMAT > Beta SP DIRECTOR > Laure Sullivan, Paul Wilson A short film that uses the voices of children who attend Independence School (P.S. 234), at Ground Zero, to tell the story of a boy who dreams of being a super hero and of helping to put right all that was broken in the attacks of September 11. SCREENINGS The View From Here: A Poetic Response to the Attacks on the World Trade Center > Sun, Apr 7 > 1:00pm > 4h00 > Madison Art Center - Auditorium, 3rd Floor > PRICE NOTE > Free This forty-minute program will play in a continuous loop between 1 and 5 pm.

(Wisconsin Premiere) This bold, two-part documentary served as something of a study film for Kippur but also stands by itself as a major achievement in Gitaï’s career. Gitaï and members of his family meet up with the men still living in Israel who were shot down with him during the 1973 Yom Kippur War. Later, Gitaï travels halfway across the world, to California, to spend some time with his old friend Uzi, the man upon whom the character Ruso is based in Kippur. — RAY PRIVETT SCREENINGS War Memories > Sun, Apr 7 > 5:00pm > 2h00 > Cinematheque > ORDER CODE: WAR > Introduction by guest curator Ray Privett. SPONSOR > Conney Fam-

(Wisconsin Premiere) When a pretty new swim coach shows up at Tadano High School hoping to form a synchronized swim team, she is faced with a harsh reality: Tadano is an all-boys school. Though five adorable boys (who all happen to be terribly bad swimmers) are up to the task, their early efforts end in disaster. But with the help of a dolphin trainer and other creative methods of practice, they eventually pull through. The result is an unapologetically wacky, over-the-top comedy that delivers big laughs from the opening credits right through the stunning, show-stopping musical finale. Writer/ Director Shinobu Yaguchi (Adrenaline Drive) riddles the film with homoerotic subtext, but you might be too doubled over in laughter to notice. Official Selection, 2001 Toronto Film Festival. — SANDY LUCAS SCREENINGS Waterboys > Sat, Apr 6 > 9:00pm > 1h30 > Play Circle > ORDER CODE: WB1 > Campus late night movies made

(Madison Premiere) This latest film from Malaysianborn Taiwanese auteur Tsai Ming-liang had its world premiere at the Cannes International Film Festival. Tsai has been praised since his 1992 directorial debut (Rebels of the Neon God) for his unconventional storytelling and social commentary. Shot in Taipei and Paris, Tsai’s fifth feature film, What Time Is it There? features the protagonist of all Tsai’s films, Lee Kang-Sheng and Francois Truffaut’s alter ego Jean-Pierre Léaud (The Four Hundred Blows). A young man sells watches on the streets of Taipei. When his father suddenly dies, his mother becomes consumed with thoughts of reincarnation and prays constantly for her husband to return.

(US Premiere) Maureen Marovitch and David Finch are lovers. They are also filmmakers. Sometimes, they see things a bit differently. So far, what’s new? Quite a lot, actually, in this frank and engaging Canadian documentary about polyamory, i.e. multipartner relationships, in which Marovitch and Finch turn the camera on themselves, their lovers, and other non-monogamists. Maureen believes in polyamory, the philosophy of simultaneously and openly loving more than one person. And that’s just a little too much togetherness for David, who wants Maureen to break up with her two other lovers and settle down with him. Just him. Marovitch and Finch work through their differences by making a film about their relationship, with startling matter-of-factness and good humor. After a journey across North America,—swingers, pagans, group families, and a Loving More Polyamory Convention—the film finds its core in the filmmakers’ shared house in Montreal, where David sleeps downstairs whenever Maureen’s lovers come to stay. As Maureen’s experiments lead her into a relationship with a married man and his unstable wife (who live in Wisconsin), a devastating crisis forces everyone involved to confront the difficult realities of polyamory. “Fascinating . . . illuminating, emotionally charged, [and] sometimes jawdropping.”—Elan Mastai, Vancouver Film Festival. — MARY CARBINE SCREENINGS When Two Won’t Do > Thu, Apr 4 > 9:30pm > 2h00 > Bartell - Drury > ORDER CODE: WT1 > With filmmakers