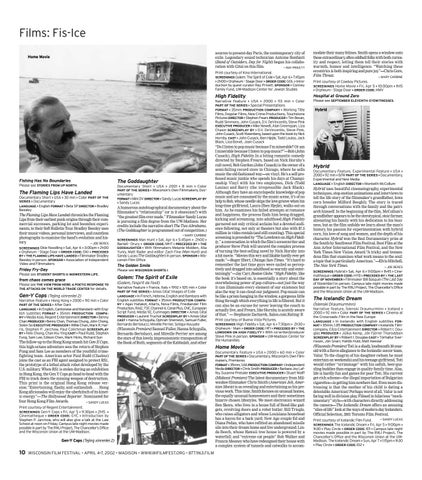 Fishing Has No Boundaries

Please see STORIES FROM UP NORTH.

A humorous autobiographical documentary about the filmmaker’s “relationship” (or is it obsession?) with “the greatest film ever made.” Filmmaker Sandy Lucas is pursuing a film degree from the UW-Madison. Her credits include the narrative short The Two Abrahams. (The Goddaughter is programmed out of competition.) — MARY CARBINE SCREENINGS Man Hunt > Sat, Apr 6 > 5:45pm > 2h00 > Bartell - Drury > ORDER CODE: MHT > PRECEDED BY > THE GODDAUGHTER > With filmmakers Melanie Middien, Alia

from chaos comes grace Please see THE VIEW FROM HERE: A POETIC RESPONSE TO THE ATTACKS ON THE WORLD TRADE CENTER for details.

The follow-up to the Hong Kong smash hit Gen-X Cops, this high-octane adventure sees the return of Stephen Fung and Sam Lee as members of the youthful crimefighting team. American actor Paul Rudd (Clueless) joins the cast as an FBI agent assigned to protect RS1, the prototype of a lethal attack robot developed by the U.S. military. When RS1 is stolen during an exhibition in Hong Kong, the Gen Y Cops go head-to-head with the FBI to track down the missing weapon of destruction. This print is the original Hong Kong release version.“Entertaining, flashy, and outlandish . . . Hong Kong aficionados will enjoy the uberkitsch of its kinetic energy.”—The Hollywood Reporter. Nominated for four Hong Kong Film Awards. — SANDY LUCAS

(Wisconsin Premiere) Samuel Fuller, Hanna Schygulla, Bernardo Bertolucci, and Mireille Perrier are among the stars of this lovely, impressionistic transposition of the Book of Ruth, segments of the Kabbalah, and other

Print courtesy of Regent Entertainment. SCREENINGS Gen-Y Cops > Fri, Apr 5 > 9:30pm > 2h15 > Cinematheque > ORDER CODE: GYC > Introduction by Stephen P. Jarchow, who will also give a talk at the Law School at noon on Friday. Campus late night movies made possible in part by The RWJ Project, The Chancellor’s Office and the Wisconsin Union at the UW-Madison.

“Do I listen to pop music because I’m miserable? Or am I miserable because I listen to pop music?”—Rob (John Cusack), High Fidelity.In a biting romantic comedy directed by Stephen Frears, based on Nick Hornby’s cult novel, Rob Gordon (John Cusack) is the owner of a semi-failing record store in Chicago, where he sells music the old-fashioned way—on vinyl. He’s a self-professed music junkie who spends his days at Championship Vinyl with his two employees, Dick (Todd Louiso) and Barry (the irrepressible Jack Black). Although they have an encyclopedic knowledge of pop music and are consumed by the music scene, it’s of no help to Rob, whose needle skips the love groove when his long-time girlfriend, Laura (Iben Hjejle), walks out on him. As he examines his failed attempts at romance and happiness, the process finds him being dragged, kicking and screaming, into adulthood.High Fidelity garnered not only critical acclaim but a devoted audience following, not only at theaters but also with $7.5 million in video rentals (and still counting). This special screening is preceded by “The Lowdown on High Fidelity,” a conversation in which the film’s screenwriter and producer Steve Pink will unravel the complex process of turning the best-selling novel by Nick Hornby into a hit movie. “Movies this wry and likable hardly ever get made.”—Roger Ebert, Chicago Sun-Times. “It’s hard to remember the last time guys were nailed so perceptively and dragged into adulthood so warmly and entertainingly.”—Jay Carr, Boston Globe. “High Fidelity, like the book it’s based on, is essentially a story about the overwhelming power of pop culture—not just the way it can illuminate every element of our existence but also the way it can cloud our judgment. Pop music can be like a prism hanging in the window, a gorgeous little thing through which everything in life is filtered. But it can also be an excuse for never leaving the couch to actually live, and Frears, like Hornby, is acutely aware of that.” — Stephanie Zacharek, Salon.com.Rating: R Print courtesy of Buena Vista Pictures. SCREENINGS High Fidelity > Sat, Apr 6 > 7:30pm > 2h30 > Orpheum - Main > ORDER CODE: HFI > PRECEDED BY > THE LOWDOWN ON HIGH FIDELITY > With co-writer/producer Steve Pink in person. SPONSOR > UW-Madison Center for the Humanities

(Midwest Premiere) The latest documentary from Milwaukee filmmaker Chris Smith (American Job, American Movie) is as revealing and entertaining as his previous work. This time, Smith focuses on unusual homes, the equally unusual homeowners and their sometimes bizarre chosen lifestyles. We meet electronics wizard Ben Skora, who lives in a house full of Bond-like gadgets, revolving doors and a robot butler; Bill Triegle, who raises alligators and whose Louisiana houseboat has a bayou for a back yard; New Age couple Ed and Diana Pedan, who have refitted an abandoned missile silo into their dream home and live underground; Linda Beech, whose Hawaii tree house is powered by a waterfall; and “extreme cat people” Bob Walker and Francis Mooney who have redesigned their house with a complex system of tunnels and catwalks to accom-

Hybrid uses beautiful cinematography, experimental techniques, stop-motion animations and interviews to tell the life story of the filmmaker’s grandfather, Iowa corn breeder Milford Beeghly. The story is traced through conversations with the family and the patriarch himself. In the beginning of the film, McCollum’s grandfather appears to be the sterotypical, stoic farmer, alienating his family with his dedication to his business, but as the film unfolds we learn about the man’s history, his passion for experimentation with hybrid corn, his love of song and women, and the depth of his character. Hybrid won the Best Documentary prize at the South by Southwest Film Festival, Best Film at the Ann Arbor International Film Festival, and the New York Times New Vision Award.“A tricky and tremendous film that examines what work means to the soul: a topic that is particularly American.”—Elvis Mitchell, The New York Times. — JOE BERES SCREENINGS Hybrid > Sat, Apr 6 > 9:00pm > 1h45 > Cinematheque > ORDER CODE: HYB > PRECEDED BY > THE LAST DAY OF NOVEMBER > Filmmaker Bill Basquin (The Last Day of November) in person. Campus late night movies made possible in part by The RWJ Project, The Chancellor’s Office and the Wisconsin Union at the UW-Madison.

(Wisconsin Premiere) Toti is a shady, loudmouth 30-yearold with a fierce allegiance to the Icelandic soccer team, Valur. To the chagrin of his daughter (whom he must entertain on weekends) and his teenage girlfriend, Toti would rather “scrimmage” with his oafish, beer-guzzling buddies than engage in quality family time. Alas, life is hardly fun and games for poor Toti. His current get-rich scheme—the illegal importation of Bulgarian cigarettes—is getting him nowhere fast. Even more distressing is that the mother of his child is dating a detestable American! Perhaps worst of all, Valur is not faring well in division play. Filmed in hilarious “mockumentary” style—with characters directly addressing the camera—The Icelandic Dream offers an amusing “slice-of-life” look at the ways of modern-day Icelanders. Official Selection, 2001 Toronto Film Festival. — SANDY LUCAS Print courtesy of Icelandic Film Fund. SCREENINGS The Icelandic Dream > Fri, Apr 5 > 9:00pm > 1h30 > Play Circle > ORDER CODE: ID1 > Campus late night movies made possible in part by The RWJ Project, The Chancellor’s Office and the Wisconsin Union at the UWMadison. The Icelandic Dream > Sun, Apr 7 > 1:15pm > 1h30 > Play Circle > ORDER CODE: ID2 >