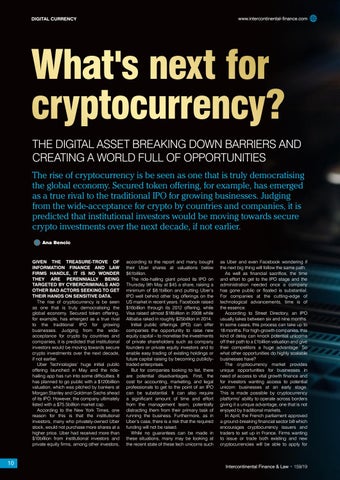 What&#39;s next for cryptocurrency? THE DIGITAL ASSET BREAKING DOWN BARRIERS AND CREATING A WORLD FULL OF OPPORTUNITIES The rise of cryptocurrency is be seen as one that is truly democratising the global economy. Secured token offering, for example, has emerged as a true rival to the traditional IPO for growing businesses. Judging from the wide-acceptance for crypto by countries and companies, it is predicted that institutional investors would be moving towards secure crypto investments over the next decade, if not earlier. Ana Bencic

GIVEN THE TREASURE-TROVE OF INFORMATION FINANCE AND LAW FIRMS HANDLE, IT IS NO WONDER THEY ARE PERENNIALLY BEING TARGETED BY CYBERCRIMINALS AND OTHER BAD ACTORS SEEKING TO GET THEIR HANDS ON SENSITIVE DATA. The rise of cryptocurrency is be seen as one that is truly democratising the global economy. Secured token offering, for example, has emerged as a true rival to the traditional IPO for growing businesses. Judging from the wideacceptance for crypto by countries and companies, it is predicted that institutional investors would be moving towards secure crypto investments over the next decade, if not earlier. Uber Technologies’ huge initial public offering launched in May and the ridehailing app has run into some difficulties. It has planned to go public with a $120billion valuation, which was pitched by bankers at Morgan Stanley and Goldman Sachs ahead of its IPO. However, the company ultimately listed with a $75.5billion market cap. According to the New York Times, one reason for this is that the institutional investors, many who privately-owned Uber stock, would not purchase more shares at a higher price. Uber had received more than $10billion from institutional investors and private equity firms, among other investors,

according to the report and many bought their Uber shares at valuations below $61billion. The ride-hailing giant priced its IPO on Thursday 9th May at $45 a share, raising a minimum of $8.1billion and putting Uber’s IPO well behind other big offerings on the US market in recent years. Facebook raised $16billion through its 2012 offering, while Visa raised almost $18billion in 2008 while Alibaba raked in roughly $25billion in 2014. Initial public offerings (IPO) can offer companies the opportunity to raise new equity capital – to monetise the investments of private shareholders such as company founders or private equity investors and to enable easy trading of existing holdings or future capital raising by becoming publiclytraded enterprises. But for companies looking to list, there are potential disadvantages. First, the cost for accounting, marketing, and legal professionals to get to the point of an IPO can be substantial. It can also require a significant amount of time and effort from the management team, potentially distracting them from their primary task of running the business. Furthermore, as in Uber’s case, there is a risk that the required funding will not be raised. While no guarantees can be made in these situations, many may be looking at the recent state of these tech unicorns such

as Uber and even Facebook wondering if the next big thing will follow the same path. As well as financial sacrifice, the time and effort to get to the IPO stage and the administration needed once a company has gone public or floated is substantial. For companies at the cutting-edge of technological advancements, time is of the essence. According to Street Directory, an IPO usually takes between six and nine months. In some cases, this process can take up to 18 months. For high-growth companies, this kind of delay can knock potential unicorns off their path to a £1billion valuation and give their competitors a huge advantage. So what other opportunities do highly scalable businesses have? The cryptocurrency market provides unique opportunities for businesses in need of access to vital growth finance and for investors wanting access to potential unicorn businesses at an early stage. This is made possible by cryptocurrency platforms’ ability to operate across borders giving it a unique advantage, one that is not enjoyed by traditional markets. In April, the French parliament approved a ground-breaking financial sector bill which encourages cryptocurrency issuers and traders to set up in France. Firms wanting to issue or trade both existing and new cryptocurrencies will be able to apply for