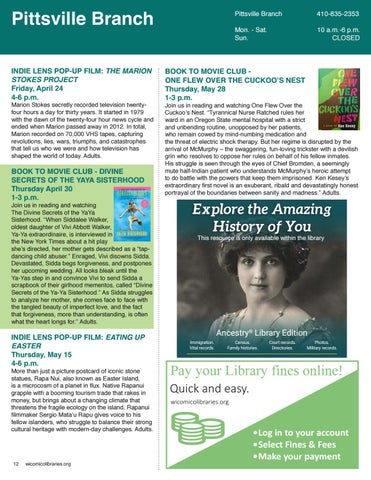 Marion Stokes secretly recorded television twentyfour hours a day for thirty years. It started in 1979 with the dawn of the twenty-four hour news cycle and ended when Marion passed away in 2012. In total, Marion recorded on 70,000 VHS tapes, capturing revolutions, lies, wars, triumphs, and catastrophes that tell us who we were and how television has shaped the world of today. Adults.

Join us in reading and watching The Divine Secrets of the YaYa Sisterhood. “When Siddalee Walker, oldest daughter of Vivi Abbott Walker, Ya-Ya extraordinaire, is interviewed in the New York Times about a hit play she’s directed, her mother gets described as a “tapdancing child abuser.” Enraged, Vivi disowns Sidda. Devastated, Sidda begs forgiveness, and postpones her upcoming wedding. All looks bleak until the Ya-Yas step in and convince Vivi to send Sidda a scrapbook of their girlhood mementos, called “Divine Secrets of the Ya-Ya Sisterhood.” As Sidda struggles to analyze her mother, she comes face to face with the tangled beauty of imperfect love, and the fact that forgiveness, more than understanding, is often what the heart longs for.” Adults.

More than just a picture postcard of iconic stone statues, Rapa Nui, also known as Easter Island, is a microcosm of a planet in flux. Native Rapanui grapple with a booming tourism trade that rakes in money, but brings about a changing climate that threatens the fragile ecology on the island. Rapanui filmmaker Sergio Mata’u Rapu gives voice to his fellow islanders, who struggle to balance their strong cultural heritage with modern-day challenges. Adults.

Join us in reading and watching One Flew Over the Cuckoo’s Nest. “Tyrannical Nurse Ratched rules her ward in an Oregon State mental hospital with a strict and unbending routine, unopposed by her patients, who remain cowed by mind-numbing medication and the threat of electric shock therapy. But her regime is disrupted by the arrival of McMurphy – the swaggering, fun-loving trickster with a devilish grin who resolves to oppose her rules on behalf of his fellow inmates. His struggle is seen through the eyes of Chief Bromden, a seemingly mute half-Indian patient who understands McMurphy’s heroic attempt to do battle with the powers that keep them imprisoned. Ken Kesey’s extraordinary first novel is an exuberant, ribald and devastatingly honest portrayal of the boundaries between sanity and madness.” Adults.

Your ancestors left clues along the way. Now, you can trace them online.

Quick and easy. POWERED BY 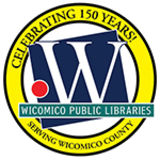