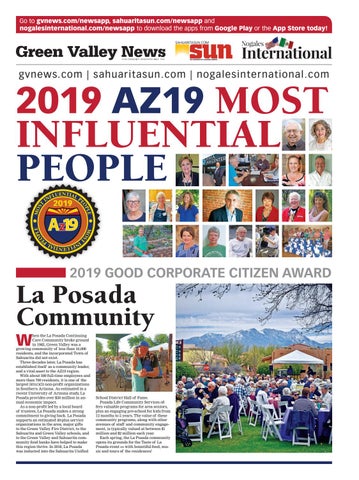 THE NEWSPAPER OF SAHUARITA, ARIZONA

hen the La Posada Continuing Care Community broke ground in 1985, Green Valley was a growing community of less than 10,000 residents, and the incorporated Town of Sahuarita did not exist. Three decades later, La Posada has established itself as a community leader, and a vital asset to the AZ19 region. With about 500 full-time employees and more than 700 residents, it is one of the largest 501(c)(3) non-profit organizations in Southern Arizona. As estimated in a recent University of Arizona study, La Posada provides over $50 million in annual economic impact. As a non-profit led by a local board of trustees, La Posada makes a strong commitment to giving back. La Posada supports an estimated 40-plus service organizations in the area; major gifts to the Green Valley Fire District, to the Sahuarita and Green Valley schools, and to the Green Valley and Sahuarita community food banks have helped to make this region thrive. In 2018, La Posada was inducted into the Sahuarita Unified

School District Hall of Fame. Posada Life Community Services offers valuable programs for area seniors, plus an engaging pre-school for kids from 12 months to 5 years. The value of these community programs, along with other avenues of staff and community engagement, is typically valued at between $1 million and $2 million each year. Each spring, the La Posada community opens its grounds for the Taste of La Posada event â&#x20AC;&#x201D; with bountiful food, music and tours of the residences! 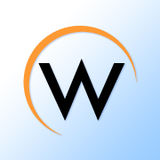 Awards for the most influential people in the Green Valley, Sahuarita areas.

Awards for the most influential people in the Green Valley, Sahuarita areas.