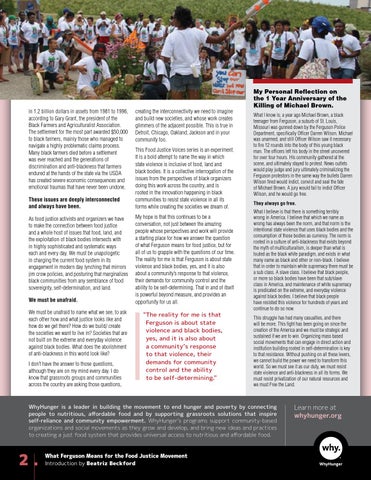 in 1.2 billion dollars in assets from 1981 to 1996, according to Gary Grant, the president of the Black Farmers and Agriculturalist Association. The settlement for the most part awarded $50,000 to black farmers, mainly those who managed to navigate a highly problematic claims process. Many black farmers died before a settlement was ever reached and the generations of discrimination and anti-blackness that farmers endured at the hands of the state via the USDA has created severe economic consequences and emotional traumas that have never been undone.

These issues are deeply interconnected and always have been. As food justice activists and organizers we have to make the connection between food justice and a whole host of issues that food, land, and the exploitation of black bodies intersects with in highly sophisticated and systematic ways each and every day. We must be unapologetic in charging the current food system in its engagement in modern day lynching that mirrors jim crow policies, and posturing that marginalizes black communities from any semblance of food sovereignty, self-determination, and land.

We must be unafraid.

creating the interconnectivity we need to imagine and build new societies, and whose work creates glimmers of the adjacent possible. This is true in Detroit, Chicago, Oakland, Jackson and in your community too. This Food Justice Voices series is an experiment. It is a bold attempt to name the way in which state violence is inclusive of food, land and black bodies. It is a collective interrogation of the issues from the perspectives of black organizers doing this work across the country, and is rooted in the innovation happening in black communities to resist state violence in all its forms while creating the societies we dream of. My hope is that this continues to be a conversation, not just between the amazing people whose perspectives and work will provide a starting place for how we answer the question of what Ferguson means for food justice, but for all of us to grapple with the questions of our time. The reality for me is that Ferguson is about state violence and black bodies, yes, and it is also about a communityâ&amp;#x20AC;&amp;#x2122;s response to that violence, their demands for community control and the ability to be self-determining. That in and of itself is powerful beyond measure, and provides an opportunity for us all.

We must be unafraid to name what we see, to ask each other how and what justice looks like and how do we get there? How do we build/ create the societies we want to live in? Societies that are not built on the extreme and everyday violence against black bodies. What does the abolishment of anti-blackness in this world look like? I donâ&amp;#x20AC;&amp;#x2122;t have the answer to those questions, although they are on my mind every day. I do know that grassroots groups and communities across the country are asking those questions,

&quot;The reality for me is that Ferguson is about state violence and black bodies, yes, and it is also about a communityâ&amp;#x20AC;&amp;#x2122;s response to that violence, their demands for community control and the ability to be self-determining.&quot;

My Personal Reflection on the 1 Year Anniversary of the Killing of Michael Brown. What I know is; a year ago Michael Brown, a black teenager from Ferguson, a suburb of St. Louis, Missouri was gunned down by the Ferguson Police Department, specifically Officer Darren Wilson. Michael was unarmed, and still Officer Wilson saw it necessary to fire 12 rounds into the body of this young black man. The officers left his body in the street uncovered for over four hours. His community gathered at the scene, and ultimately stayed to protest. News outlets would play judge and jury ultimately criminalizing the Ferguson protestors in the same way the bullets Darren Wilson fired would indict, convict and seal the fate of Michael Brown. A jury would fail to indict Officer Wilson, and he would go free.

They always go free. What I believe is that there is something terribly wrong in America. I believe that which we name as wrong has always been the norm, and that norm is the intentional state violence that uses black bodies and the consumption of those bodies as currency. The norm is rooted in a culture of anti-blackness that exists beyond the myth of multiculturalism, is deeper than what is touted as the black white paradigm, and exists in what many name as black and other or non-black. I believe that in order to maintain white supremacy there must be a sub class. A slave class. I believe that black people, or more so black bodies have been that sub/slave class in America, and maintenance of white supremacy is predicated on the extreme, and everyday violence against black bodies. I believe that black people have resisted this violence for hundreds of years and continue to do so now. This struggle has had many casualties, and there will be more. This fight has been going on since the creation of the America and we must be strategic and sustained if we are to win. Organizing mass based social movements that can engage in direct action and institution building rooted in self-determination is key to that resistance. Without pushing on all these levers, we cannot build the power we need to transform this world. So we must see it as our duty, we must resist state violence and anti-blackness in all its forms. We must resist privatization of our natural resources and we must Free the Land.

WhyHunger is a leader in building the movement to end hunger and poverty by connecting self-reliance and community empowerment. WhyHunger&#39;s programs support community-based organizations and social movements as they grow and develop, and bring new ideas and practices

Beatriz Beckford, Director of WhyHunger's Grassroots Action Network, introduces the publication 'What Ferguson Means for the Food Justice Movement', and reflects on the 1 year anniversary of the killing of Michael Brown 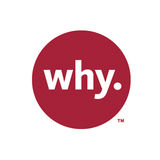